Belgium: health workers strike against lay-offs because of mandatory vaccinations 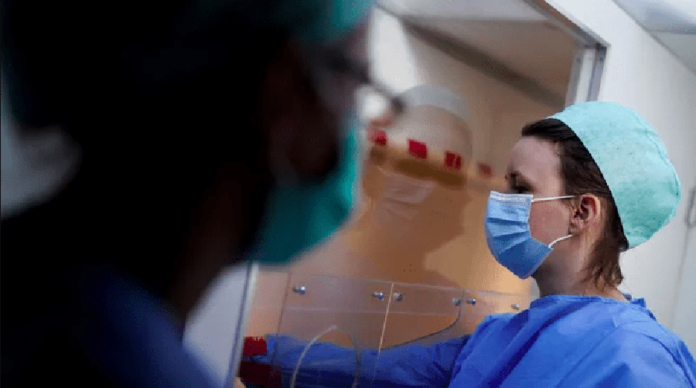 The CSC, Belgium’s Christian-democratic trade union, is calling a strike for workers in all public and private hospitals in Wallonia. The CSC issued the call to strike on Thursday after the federal government announced measures for mandatory vaccination of health workers.

According to the government’s proposal, health workers who are not fully vaccinated by January 1st, 2022, will be suspended. If they are still not fully vaccinated by April 1st, they will be fired. The CSC’s call to strike was followed by the socialist unions CGSP (public sector workers) and SETca (private sector workers) in Brussels on Friday. Specifically, the three unions call for “actions in public and private hospitals in protest against excessive workload, budget cuts, staff shortages, reduction of leave and days off: in other words, all those elements that make our work unlivable”.

In the end, the three unions decided to organise various actions in their workplaces during the week of November 22nd to November 26th and to go on a 24-hour strike and march on December 7th.

The government’s decision is not yet final, it has already been approved by the government but needs to be submitted to the Council of State for approval. The unions complain that it is unacceptable to propose to dismiss some workers, thereby increasing the workload of the rest, in a sector already suffering from tragic staff shortages. For years, health workers in hospitals have been quitting because they cannot cope with the working conditions, with many others on long-term sick leave due to burn-out. At the same time, not enough new staff have been recruited to replace them.

Legal circles also raise the question of the legitimacy of the government’s decision, arguing that some people may not be vaccinated for medical or religious reasons, while others may simply refuse to take a third shot.

The decision of the three unions to strike is also supported by the grassroots trade union Santé en lutte (Health on struggle). Santé en lutte led the organisation of the large-scale health workers’ mobilisations in 2019 and 2020. In a statement, the group says, “yes to the vaccine, no to mandatory vaccination” and notes that health workers have no confidence in the governments that have managed the pandemic in such a catastrophic way and have for years undermined the public health sector with dramatic cuts. They recall that at the beginning of the pandemic, health workers were forced to go to work even if they were sick, and even if they tested positive for CoVid-19. Thousands of people have died in nursing homes because of a lack of proper measures and equipment, like facial masks. “We have hundreds of examples of negligent, even criminal management of the pandemic: locked masks not available to workers, instructions not to wear masks, denial of funding for respirators, injunctions to remove masks, prohibition to take equipment from home to protect ourselves in the workplace, etc., etc.,” the statement says.

Santé en lutte also stresses that “the excessive shifting of responsibility to individuals hides the responsibilities of the state in managing the pandemic. What we wrote when the second wave broke out is still valid today: The general political discourse today aims to make individuals responsible for a health crisis that can supposedly be tackled only if the population adjusts their behaviour. In short, if there is a second wave, it will be because we are an immature and undisciplined population. This liberal rhetoric treats us like children and, more importantly, removes responsibility from our leaders: the government and our employers in particular.”

The use of CoVid Pass

Generally in the health sector and in society, the debate on the CoVid Pass is divisive. Santé en lutte in particular notes the opinion of Christophe Prudhomme, representative of the French emergency doctors’ association and trade unionist of the CGT: “The CoVid Pass is an authoritarian political measure whose effectiveness is questionable. It is better to educate people, we need to explain the risks. The pass, like all coercive measures, has little effectiveness. People need to be convinced of good practices.”

It is worth noting that yesterday, November 21st, a march against the use of the CoVid Pass was organised in Brussels, with the participation of over 35,000 people. The march was attended by a diverse crowd: some were vaccinated but disagreed with the use of the CoVid Pass to enter places such as restaurants, bars and shops, considering the measure totalitarian. Others were simply sceptical. Some were even protesting the vaccine and the use of masks. It is important to note that there were many Flemish participants (compared to the small percentage of Flemish people living in Brussels) and many Flemish flags, which are often seen at right-wing and nationalist rallies. At the same time, of course, there were also many families and elderly people. The police attacked the crowd with tear gas, flash bombs and water pumps when the march deviated from the route approved by the Brussels municipality.

Back to the mobilisation of health workers’, the Santé en Lutte statement, as well as the statements of the three unions calling the strike, all focus their demands on increasing funding for public health and the need for recruitments and allocating resources to hospitals.

They also call for abolishing the vaccine patents, universal vaccination of the population, and a broad and transparent strategy for informing society about vaccines. According to the Santé en lutte statement, public health must be geared towards prevention, patents must be abolished and vaccines must be accessible free of charge to all, all over the world. At the same time, they call for:

Health workers in Belgium are denouncing the attitude of the government as a whole in the management of the pandemic, in a way that will sound very familiar in most countries:

“When health workers are not vaccinated, we fire them.

When health workers go on strike, we force them back to work.

When health workers work 60 hours a week, we promise them overtime payment.

When they protest, we teargas them.

If health workers test positive for CoVid, but are asymptomatic, they have to go to work.