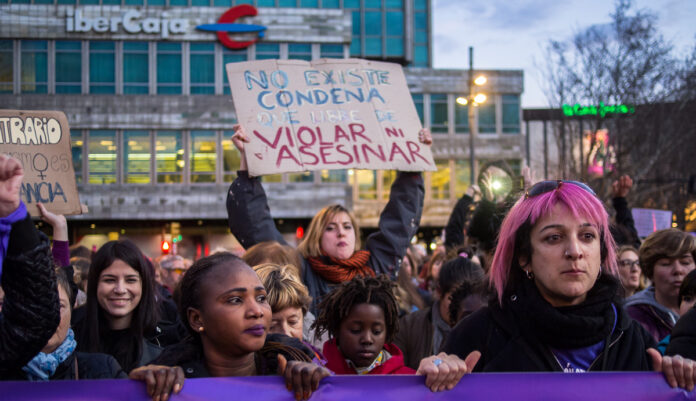 The new law, proposed by the Podemos minister of Equality, Irene Montero, introduces important advances on women’s reproductive rights even though it was watered down during the negotiation with the Party of Social Democracy (PSOE).

The coalition government in the Spanish state, led by the social democratic PSOE and with several Unidas Podemos ministers (Unidas Podemos is made up of United Left and Podemos, mainly) approved in May a new law with different advances on the sexual and reproductive rights of women. The law has been proposed by the Ministry of Equality, led by Irene Montero (Podemos) and even though substantial parts of it were removed or changed during the negotiation with the rest of the government, it still introduces important advances.

Abortion rights – Reversing the restrictions of the PP

The main changes included in the law affect abortion rights in the Spanish state. Abortion has been legal up to the 14th week of pregnancy since 2010, when it was approved by Zapatero’s government (PSOE). But this was not properly implemented, mainly because some doctors refused to carry out abortions citing “reasons of conscience”. This means that many women have to travel outside their region to get an abortion, or that they have to use the services of private hospitals. As a result, today only 20% of abortions take place in public hospitals in the Spanish state.

Moreover, the media recently exposed that in hospitals where all doctors are “objectors”, they force new gynecologists coming to work in the hospital to also declare themselves as objectors because otherwise their only function in the hospital would be to practice abortions. A medical doctor also explained how she was denied an abortion in the public hospital where she works and had to use private services.

This is one of the practical or legislative obstacles to abortion that this new law will try to eliminate. The law prohibits doctors who are conscientious objectors in a public hospital to practice abortions in private hospitals, and also seeks to guarantee that all public hospitals provide abortions, so women aren’t forced to travel any more.

Another important change will be that the new law will allow 16–17-year-old girls to get an abortion without their parents’ knowledge or permission. This was a barrier which has mainly affected the most vulnerable girls, such as girls suffering from sexual abuse inside their families, girls in institutional care, whose parents are in jail, etc.

In 2014, the then PP government proposed very strong restriction on abortion rights which were targeted to bring back the laws from the 1980s with even more backward twists. The proposal came from the then Minister of Justice, Gallardón, who wanted to prohibit all abortions except in the cases of rape or severe risk to the mother’s health or life. The malformation of a foetus was not even considered in the first draft of the law. Gallardón went on to justify the law saying that “maternity makes a woman an authentic woman”, showing his backwards concept of women as mere incubators and family carers. This approach also served the need to get women back to their homes during the very deep recession of 2008-9 and the subsequent cutbacks to public services such as education, health, and care services for old and disabled people.

The feminist movement and the left parties strongly opposed this move and the ideology behind it. Most of the proposed law was withdrawn and Gallardón had to resign. But the great explosion of the feminist movement came in 2017-2018, with the Feminist Strikes organised on March 8th – International Women’s Day, during these years. Women in these demonstrations, shouted for: the extension of public services so that child and elderly care didn’t have to continue falling on women’s shoulders, against all discrimination and violence against women, for an end of the catholic church influence over women’s bodies, especially in relation to abortion rights, etc. It was fundamental for the movement to reverse the restrictions to abortion that were introduced in 2015 by the PP government. This included the requirement for parental permission in order for 16-17-year-old girls to receive the right to an abortion, as well other restrictions and difficulties in getting an abortion in the nearest public hospital.

Today’s new law serves to reverse the restrictions and difficulties that the PP introduced. It even goes a step forward from the 2010 law that legalised abortions.

Other gains included in the law

The law also includes other steps forward in relation to reproductive and sexual rights. A very important point is allowing sick leave for women from the 39th week of pregnancy (Podemos originally proposed from the 36th week) and up to 3 days sick leave for severe menstrual pain.

This last point has been the target of criticism and ridicule in mainstream and social media. This serves again as a reminder of the situation that unfortunately women suffer all the time in the health system, including the public health system, where their health problems and sufferings are usually downplayed.

The law precisely wanted to end the stigma or feelings of guilt or shame when asking for a sick leave due to a painful period, and also to stop the taboo in relation to periods as it is a natural process that women go through once a month.

Another too frequent problem that women suffer is obstetric violence, which includes practices like implementing treatments or practices that women have not approved or have not been informed of during childbirth. However, this is not yet included in the law, and will surely be the source of further struggle by the feminist movement.

However, the law recognises and prohibits other practises as reproductive violence: forced pregnancy or abortion, sterilisation of disabled women, and very importantly, surrogate pregnancy. The law recognises surrogacy as a form of violence which affects poor women and also prohibits the advertisement of agencies which facilitate it. This is the same argument that the feminist movement has defended, and clearly shows that surrogate maternity is not a real feminist demand, but a liberal demand which wants to use women’s bodies as commodities.

Another very important demand of the feminist movement is sexual education which is also included in the new law. Sexual education will be mandatory in all educational stages, and will also be provided to teachers and prison officers among other public workers.

This is, no doubt, a very important measure, given the pressure from the right wing, especially the far right, against sexual education in schools. The far right has been consistently lying about the sexual education provided in schools in order to create scandals about it. Vox, the main party of the far right, has even got enacted in some regions the so-called “parental opt-out”, as pay back for parliamentary support for regional PP governments. This means that parents can get their children out of the few workshops and classes about sexual education in primary or secondary schools that do take place.

The increase in sexual and gender-based violence among young people shows clearly that sex education is more necessary than ever in schools, especially when very young children can access pornography through their phones, and this pornography is mainly showing acts of violence against women, including rape.

“The struggle is the only way forward”

This is the slogan of many working class and social movements in Spain, including the feminist movement.

As experience with the 2010 abortion rights law shows, laws are not enough to guarantee working-class women’s rights, and therefore we need to continue struggling to guarantee our hard-gained rights.

The overturn of Roe v Wade in the US illustrates that even the rights which are considered fundamental and consolidated can be erased by right and far right politicians.

The new abortion and reproductive rights laws have been approved by the government, but they have not been passed by parliament yet, and we need to make clear that we will fight for every advance and gain that this new law introduces, and we won’t tolerate this being watered down any further.

Already, parts of the law were not accepted in the negotiations between Podemos and PSOE, such as: reducing the VAT on period products, paid leave from the 36th week of pregnancy, and recognising other forms of obstetric violence that women have to suffer during childbirth.

Even when the law is passed, enough funding will be needed for it to be implemented properly because it will require an increase in doctors and public health facilities, education funding, etc. In the current context of crisis, some may be tempted to say that these reproductive issues are not important and that we should be more worried about inflation, electricity and fuel prices, etc. However, rights in relation to public services such as health and education, working conditions for women, and above all the right to decide about our own bodies and destinies are also fundamental. These issues impact especially on working-class women.