Portugal: Debates around the campaign to “normalize” the far-right Chega- article by Semear O Futuro 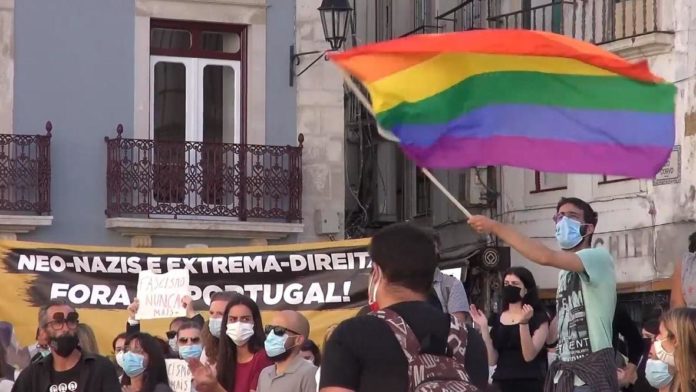 We publish here an edited translation of an article about the rise of the far-right Chega party in Portugal, written by Tiago Castelhano of Semear O Futuro. This is part of the ongoing debates inside the Left on the recent Portuguese elections and how to fight against the rise of neo-fascism.

This last couple of weeks there has been an impressive amount of commentary in social media comparing the neo-fascist Chega party [in Portuguese: Enough] to the Left Block [Bloco de Esquerda- (BE)] and the Portuguese Communist Party [Partido Comunista Português- (PCP)]. This avalanche of commentary is primarily intended to explain and justify the election of Diogo Pacheco Amorim, a neo-fascist deputy and former member of the terrorist group Democratic Movement for the Liberation of Portugal [Movimento Democrático de Libertação de Portugal – (MDLP)], as vice-president of the Assembly of the Republic, the Portuguese Parliament.

The comparison of the ultra-right Chega with PCP and BE (which is not new, but has been going on for a while) aims to “normalize” Chega- to present it as an acceptable party in the eyes of the public. Well-known journalists like João Miguel Tavares or José Miguel Júdice believe that the main right-wing party needs Chega in order to return to power. At the same time, it also serves big business media in order to attack the Left, by demonizing it. Both Tavares, Júdice and big media outlets such as the Observador, the Jornal I or the Cofina group have used this type of outlandish comparisons for quite a while. Now, under the pretext of the election of a Chega supporter as the vice-president of the parliament, others have joined in the campaign to “normalize” Chega – in some instances even using Chega’s very claims and statements.

Carlos Guimarães Pinto of the Liberal Initiative [Iniciative Liberal- IL], uses “tradition” to justify his position. For those who claim to be “liberal and modern”, this position only demonstrates that in reality, from the moment that the election campaign was over, IL was in reality willing to support Chega by actively promoting the normalization of the ultra-right.

The campaign of the normalization of the neo-fascists has been taking place while Chega is gradually being integrated into state institutions. This started with Chega’s legalization by the Constitutional Court, when it is clearly a party that by its very ideology is unconstitutional. The President of Portugal, Marcelo Rebelo de Sousa, is one of those responsible for this. During the October 2020 local elections in the Azores region, de Sosa “didn’t see a problem” with the establishment of a local government dependent on support from Chega. By not creating a “cordon sanitaire” on Chega, the consequence was to render it a “normal” party like the rest.

At the side of President de Sousa, stood all the right-wing parties that in the Azores government accepted Chega’s support, motivated by their desperation to return to power. The same desperation was evident in the legislative elections, with the sad spectacle of Rui Rio (leader of the right-wing Social Democratic Party) playing down André Ventura’s (leader of Chega) demands for more extreme punishments in the judiciary system.

Unfortunately, this normalization does not stop at the main right-wing establishment parties. Socialist Party Prime Minister, António Costa, in an interview about a year ago, equated Chega’s Ventura to the antiracist activist Mamadou Ba, with the statement “Neither André Ventura nor Mamadou Ba represent the sentiment of the majority of the country”. Unfortunately, equating a neo-fascist who advocates, for instance, confinements against the Roma community, chemical castrations, or life imprisonment, to an anti-racist activist committed to the fight for human rights creates precisely this “normalization” of the ultra-right.

One of the arguments used across the board in the public debate, including some sectors of the Left, is the appeal to “give a platform” to Chega when it is mentioned or attacked. Recently, Marques Mendes (SPD politician) used this same argument and claimed that if you do not offer a platform to the fascists “then, don’t complain that Chega goes up in the polls and votes, and threatens democracy”.

“Offering a platform to Chega”

It is important to think about this argument concretely because it is very popular in wide sections of society. Unlike Marques Mendes, there are people genuinely concerned with the rise of Chega, and who argue that the best tactic to defeat them is to ignore them. They argue that the best tactic is “not to fall for Ventura’s and Chega’s provocations”, because they have the “goal of generating polemics in order to get more attention”.

While I agree that the neofascist Chega and Ventura try to generate polemics to set the political agenda, this cannot lead us to conclude that it is best to say or do nothing in the face of the barbarism that they stand for.

The discussion about the best tactics to defeat neo-fascism is not limited geographically to Portugal; it has taken place and still takes place in countries like Brazil, which has a neo-fascist in power, in the US, or in France.

Looking historically at examples such as the rise to power of Mussolini in Italy, or Hitler in Germany, we conclude that one of the main problems was precisely the opposite: the total passivity in some cases while in others, the integration of fascist parties into governments and institutions with the help of the elites.

We cannot analyze here all the factors that led Mussolini and Hitler to take power. But the truth is that both were normalized in the public sphere through invitations to the government by the right-wing or the bourgeoisie. In both cases, what prevailed was the opposite of a combative mood against them. In fact, to ignore these organizations and, respectively, their ideology – which is based on the dominant (bourgeois) ideology- is naive, as it is impossible to defeat those who dominate the world without a fight.

We will never be able to fight neo-fascism if we do not ideologically fight its ideas, such as racism, LGBTQIphobia, climate denialism, and sexism.

On the other hand, the defeat of neo-fascism is only possible if we manage, along with the ideological struggle, to establish a broad unity of action for street demonstrations. The mobilization on the streets and unity are central to the defeat of fascism. Historical examples show us that the balance of forces in the streets is crucial to annihilate neo-fascism.

The Example of Greece and the Golden Dawn

More recently we have the example of the neo-nazi organization, Golden Dawn, which was defeated in Greece.

The victory over the Greek neo-nazi party, showed the importance of the unity of the various working-class organizations and of their success in turning the struggle against neofascism into a struggle of the working class as a whole.

As Joana Mortágua, deputy of the Left Block, defended in an interview in Jornal I, the cordon sanitaire around Chega is crucial for their defeat, and the vote against the election of Diogo Pacheco Amorim is part of this same tactic. Looking again at the Greek example, this is also what the anti-fascist movement did when, for example, they organized a campaign demanding ERT (the state television station) to prevent Golden Dawn from appearing on their channel, which they achieved with the support of the journalists’ union. Whenever they had a nazi supporter on an ERT program, the journalists went on strike, thus achieving that the leaders of the Golden Dawn would not appear on television.

These examples can help the Left discuss how to create a real barrier, a cordon sanitaire, against neo-fascism and to demand a clear position to be taken from the other parties and institutions in Portugal.