Greek-Turkish Relations: a new and dangerous phase of tensions has opened up 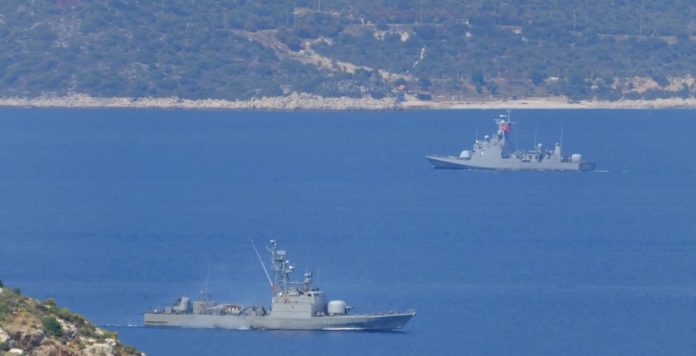 The armies of both countries were put on high military alert and all scenarios were on the table, even that of a “hot episode” between the two fleets in the open sea, off the coast of Kastellorizo.

The crisis eventually subsided and was followed by a period of a relative cooling down in relations, which culminated in Prime Minister Mitsotakis’ visit to Istanbul and dinner with his counterpart Erdogan in March 2022.

After the meeting, Mitsotakis stated:

“I believe that we have laid the foundations for the improvement of our relations and especially to work together on the major issues which we are currently facing enormous challenges.”

“if all goes well, I believe that we will be able to convene a Supreme Cooperation Council in Greece this time”

All this was happening just 3 months ago!

Today, the crisis in Greek-Turkish relations has intensified again and the situation is reminiscent of the phase during the summer of 2020.

The Greek government stopped the process of Confidence Building Measures between the two sides while Turkey, via the Minister of Foreign Affairs Çavuşoğlu, directly called into question the sovereignty of the islands of the Eastern Aegean and Dodecanese if they were not demilitarized.

Specifically, while speaking to the Anadolu agency, having shown maps colouring the entire Eastern Aegean Sea grey, he said:

“It is against international law for Greece to cancel the status of the islands conditionally given to it within the framework of the 1923 Lausanne and 1947 Paris peace agreements. Whatever reason Greece finds, its justification is not valid. What were the terms? It will not arm these islands. Greece has armed them since 1960, so we say that if it doesn’t yield, we will start a debate on their sovereignty”.

Erdogan himself recently stated that Greek PM Mitsotakis “no longer exists for him”!

What is the background of this conflict?

The general frame of the competition between the Greek and the Turkish ruling classes has not changed over time.

What underlines this competition is the clash of the two ruling classes over the real material interests at stake in the wider region; and neither one is willing to give these up in the context of a battle for domination.

In this general context there are of course intervals during which one can identify a smoothing of relations. Attempts are made to ease the tensions, but the competition is so fierce that crises keep erupting, with the ever-present risk that they can escalate and get out of control.

For many years, Turkey has been trying to play a wider role in the region, taking advantage of, among others, the waning relative strength of US Imperialism. Turkey remains a NATO member but continues to have close relations with Russia, and, from time to time, does not hesitate to differentiate itself from the USA. Its army recently invaded northern Iraq, once again fighting Kurdish forces; it has occupied part of Syria; for the past two years it has been interfering in the internal political developments in Libya, having secured the presence of its own troops. At the same time, it has also become a factor in Ukraine, as it took important initiatives by bringing the foreign ministers of Russia and Ukraine to the same table last March. And very recently, Erdogan has emerged as the one who will determine whether Sweden and Finland will eventually join NATO or not.

Nevertheless, the internal situation in Turkey is currently Erdogan’s main problem as, for the first time in years, he seems to be losing his majority in terms of the forthcoming elections next spring.

Social pressures and the possible defeat of Erdogan in the elections will make his regime even tougher domestically. The growing authoritarianism of the regime has become evident with the recent hard prison sentences for activists of the Gezi Park movement but also with the public debate on a possible ban of the pro-Kurdish HDP party.

Çavuşoğlu’s recent threats must be seen in this general context. As the domestic economic and social crisis intensifies, we will see attempts by the Turkish regime to externalize its internal problems, in an effort to consolidate its electoral base.

There are some myths concerning Turkey which the Greek ruling class systematically puts forward and uses as a base for its foreign and domestic policy.

One of them is the myth of “isolated Turkey”, continuously overpromoted by Mitsotakis’ government, which does not sound convincing at all in the current circumstances.

The geopolitical status of Erdogan’s Turkey is significant and is confirmed by its role in the Ukrainian conflict. The constant military interventions of Turkey, from the Middle East and North Africa to the Armenia-Azerbaijan war over the Nagorno-Karabakh region, show a considerable regional power which is seriously taken into consideration by both the EU and the USA, notwithstanding the trouble its policies often cause for them.

The other myth is that of the huge diplomatic “success story” of the Greek government, which is summarized by Mitsotakis’ absurd statement that “we have always been on the right side of history”.

The cornerstone of the Greek ruling class’s policy is that it tries to portray itself as the most obedient servant of the western allies.

Greek governments have cast their lot in with the US-Israel axis (let’s not forget by the way that this was established under the SYRIZA government…). This is continuing with the current Mitsotakis government and was confirmed during the recent visit of the Prime Minister to the White House. The ongoing supply of military equipment to the Ukrainian government aims at giving Greece credentials inside NATO. The Greek government, out of its great passion to appear more royal than the king, went so far as to seize an Iranian oil tanker, in the context of its willingness to serve US interests. This resulted in retaliation from the Iranian regime and the seizure of two Greek tankers.

However, is this servile attitude towards the USA and NATO as effective as the Greek government believes?

The government had a first sample of this with the abrupt cancellation of the East Med pipeline (which would supposedly transport natural gas from Israel and Cyprus to Europe via Crete and mainland Greece), a cancellation decided and announced by the US Foreign Office at the beginning of the year on the grounds that it left Turkey out of the extraction game.

After Çavuşoğlu’s statements, which raised the issue of sovereignty for the islands in the Eastern Aegean Sea, media outlets close to the government presented Mitsotakis as a leader who would go to Brussels and “put Erdogan in his place”, taking advantage of his international alliances.

But Mitsotakis went to the EU Summit and did what he always does. On the sidelines of the meeting and not at the Summit itself, he approached European leaders, one at a time, showed them Çavuşoğlu’s maps and whined about Turkish aggression.

And while Macron made a statement in support of Greece, what did the German Chancellor Scholz say?

“Invading Greek airspace and flying over Greek islands is not okay, it seems counterproductive and against the spirit of the alliance”

That is a statement about which one can only wonder its purpose, as it is so vague that it says nothing. But in order to brush aside any doubts that he did not want to take a position, a German government spokesperson made it very clear:

“The chancellor is of the opinion that, given the current situation, it is necessary for all NATO allies to stand together and refrain from provocations among themselves”

Two days later, of course, both EU and US officials realized that they could not but take a position, albeit a verbal one, on the issue raised by Çavuşoğlu. However, their initial reluctance reveals their basic tendency, which is that of balancing out the differences between Greece and Turkey.

In fact, the policy of “balance” has been the choice of every “strategic ally” of Greek governments. This is indeed the limit of alliances with great imperialist powers. In the current situation they have no intention of firmly opposing Turkey. And in this sense, the multiple fronts that the Mitsotakis government opens, sometimes with Russia, sometimes with Iran, for the sake of its allies in NATO, the USA and EU, are not going to guarantee any geopolitical security, as it hopes.

The dangers remain great and the cost is ultimately paid by the people on both sides through a crazy arms race. That is of course no problem for the “allies”, on the contrary it means increased sales of their own weapons. And if the situation gets out of control and Greece, Turkey and Cyprus find themselves fighting over rocky islets or gas reserves, the “allies” will wash their hands like Pontius Pilate and then propose new arms purchases to supposedly ensure peace.