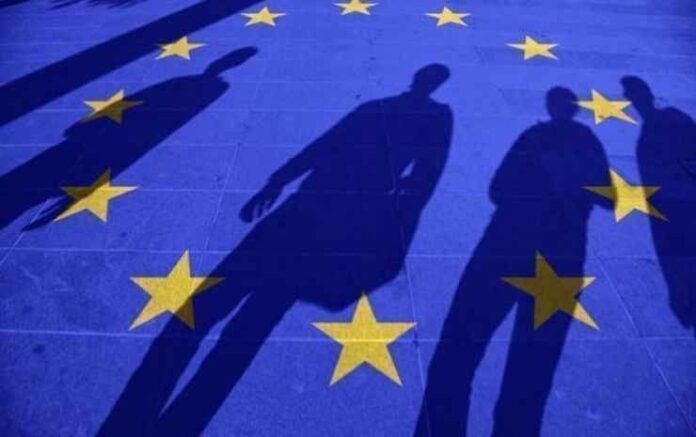 “It represents an historic opportunity”, “It’s a new Marshall Plan”. These are the words with which the mainstream media greeted the news on the agreement between the Greek government and the European Commission on the absorption of the “Recovery Fund” money.

The “Greek plan”, approved by the Commission, was launched by the Greek PM Kyriakos Mitsotakis and the Commission’s President Ursula von der Leyen on Friday 18 June on camera, with the Acropolis in the background.

What they did not say, however, is that the lion’s share of this money is again going to the chosen few. The strict prerequisites set by the EU for Greece to get this package include:

It was no coincidence that the day before this government fiesta, a monstrous anti-labour bill of the New Democracy government was voted on in Parliament.

According to the government, the recovery of the economic elite will only be achieved through an attack on wages and labour rights.

The agreed plan is called “Greece 2.0” and aspires to absorb €30.5 billion over the next 5 years. This amount is by no means insignificant. However, its distribution definitely does not point to meeting social needs, but only to the recovery of business profitability at the expense of workers and the environment.

Let us look at it in a little more detail.

Out of €30.5 billion, €17.8 billion are subsidies and €12.7 billion are loans. In principle, therefore, Greece’s public debt will be further burdened, while it is already at the unmanageable level of 207% of GDP. Let’s get things straight; there can be no growth for the benefit of society, when the level of public debt is that high and these kinds of economic policies are applied. The situation is getting out of control even within the EU, since, as we speak, the total debt of the Eurozone countries is close to breaking the 100% barrier (it is at 98% of GDP), rendering the effective exit from the crisis almost impossible.

Even the free subsidies, amounting to €17.8 billion and channelled directly to private capital, are to be financed through the issue of Eurobonds. Sooner or later, the EU will request these sums to be paid back from the Member States, that is, from the citizens, thus pressuring for a new cycle of austerity measures and for ‘structural changes’.

Which direction for the funds?

It is easily understood that the sums of the recovery fund constitute once again a transfer of wealth from broader society to the pockets of big business.

The fund’s billions of euros will not be directed, for example to: upgrading and supporting the public health system, hiring health workers, covering needs in education, protecting the environment, strengthening and improving social services, supporting the arts, workers and small businesses.

On the contrary, it’s the energy consortiums and the so-called ‘green’ and ‘digital transition’ who will devour them. The groups of companies that have already been set up around the electric car industry, the pharaonic wind farms and the huge waste incineration facilities, have been in the centre of the capitalist “green agenda” not because they are an attempt to seriously tackle the climate crisis, but only because they are new areas for capital to make easy profit.

Public-private partnership for the needs of the capital

All projects scheduled for the coming years will be in the form of public-private partnerships (PPPs).

Private investors will have a 20% share, financial institutions 30% and the public sector 50%.

In short, private “investors” will access huge, easy and quick money, with a minimal contribution, no business risk whatsoever, secured loans from banking institutions and the backing of the public sector.

In addition, while the public sector will contribute the largest share of the funds, it will have no say about which investments are approved. This will be decided by the financial institutions, i.e. the business groups themselves.

Motorways, water supply networks, digitalisation – with the possibility of managing very large amounts of citizens’ data, wind farms, etc, will be in the hands of private companies. Even the funds intended for energy, health, local administration, etc, will be subject to the participation of the private sector.

The “recovery fund”, therefore, is going to serve as yet another Trojan horse for further privatisation and degradation of public services.

The vast majority of the subsidies will be granted to very large companies. This is the direction which the ND government has adopted since the beginning of the pandemic. A typical example is the case of Aegean Airlines. On the one hand, the company received €120 million in the form of a direct subsidy, on the other hand, they achieved a €150 million bond loan by the four systemic banks in the framework of the COVID-19 Enterprise Guarantee Fund. At the same time, the government “had no money” to hire health workers or teachers.

In addition, one of the five key categories that the funds will be directed to, relates to creating “economies of scale through mergers, acquisitions and partnerships”. In other words, an even bigger concentration of wealth and the further strengthening of large companies is promoted, at the same time as 4 out of 10 small and very small businesses face the fear of shutting down in the near future.

The “Recovery Fund” flows from the same approach as the “rescue packages” adopted in the previous phase of the crisis, after 2009: easy money for big business, unlimited access to bank lending and structural changes. In other words, removing the “barriers” imposed by labour, trade union and environmental laws, shrinking democratic control, as well as creating new fields for capital profitability. Even though there is a lot of talk about the “new wave of doing things” after the COVID crisis, very little has changed in the essence of capitalist policies.

These policies are a one-way street for capital. Its survival is based on the ever-greater exploitation of the workers. Our struggle, organisation and collective resistance against these plans is the only way forward for the oppressed layers of society.