25/11: Stop the pandemic of violence! Fight against patriarchy and capitalism! 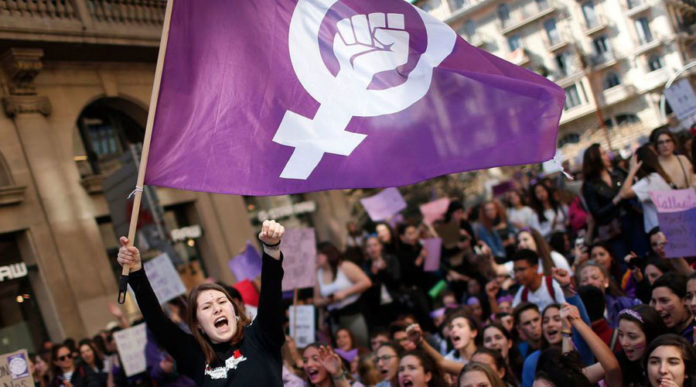 “Violence against women remains devastatingly pervasive and starts alarmingly young. Across their lifetime, 1 in 3 women, around 736 million, are subjected to physical or sexual violence by an intimate partner or sexual violence from a non-partner – a number that has remained largely unchanged over the past decade. This violence starts early: 1 in 4 young women (aged 15-24 years) who have been in a relationship will have already experienced violence by an intimate partner by the time they reach their mid-twenties.”
WHO 2021 report

137 women are killed every day across the globe, because of their gender. This means that these people were killed because they are women, in a sense, that the motive for their murder was that the perpetrator considered them as an object that belonged to him, and that he had the rights to her life and death. This is what femicide is, and in most cases, the perpetrator is someone who the victim knew very well, someone who she was related to: a partner or ex-partner, a father, a brother. In other cases, those called “non-intimate” femicides, women are used as “weapons of war” and are raped, abused, sold, or even killed in the context of an armed conflict, or they lose their lives in so-called “honour killings”. The common denominator in all these crimes is that the victims are killed because of their gender, because of the general position women have in society due to gender roles, stereotypes, discrimination, and prejudices.

Domestic violence has skyrocketed during the pandemic lock-downs

The CoVid pandemic and the subsequent lock-downs have been exacerbating violence against women. The figures from 2020 show a clear increase of calls to support lines for domestic violence and requests for shelters from victims. In several European cities, shelters filled up so quickly that the state had to rent hotels (shut down during the lock-downs), in order to give those women a place to stay. Women (often with their children, but also LGBTQI people) have been locked down in their homes with their abusive partners, their income has often decreased or completely vanished, especially when they were working for cash and undeclared or had lost their jobs. This can make them financially dependent on their abusive partners, making it virtually impossible to escape. Some research also indicates the astonishing situation in which violence tends to increase even more after the lock-downs: abusive partners became more violent as soon as women went back to a normal, more free lifestyle.

Patriarchy is the reason behind the tragic figures

It is stated clearly in the above WHO report: “Intimate partner violence is by far the most prevalent form of violence against women globally (affecting around 641 million).  However, 6% of women globally report being sexually assaulted by someone other than their husband or partner. Given the high levels of stigma and under-reporting of sexual abuse, the true figure is likely to be significantly higher.” Even though there is no global, standardised or consistent recorded data on gender violence and femicide, the figures that we do have are indisputable: women are faced with a far higher risk of violence and murder than men.

There is a reason for that: violence against women is so massive because our society remains patriarchal. Even though women have won many rights with their struggles, patriarchal concepts persist because the system, capitalism, continues to support and nurture them.

Perceptions about the “nature” of women and men, gender roles in society, and stereotypes, have existed even before capitalism. But these stereotypes survived and grew stronger under capitalism because patriarchy is a useful tool for a system of exploitation. Patriarchy is one more way of dividing people and this is necessary for the perpetuation of exploitation mechanisms. According to patriarchal values, men are superior to women, women exist for serving men and the family, for giving birth and raising children, and for offering pleasure to men. Therefore, they belong to a man, who has the right to mistreat them or even kill them, if they are not good enough or if they refuse to serve and satisfy them.

Most women who have suffered domestic violence would indeed confirm that it starts with remarks, control over when she can go out, who she can meet, how she is dressed; it develops into manipulation and psychological control and culminates in acts of physical violence, which in many extreme cases will result in murder. Clearly, the notion of women as the exclusive property of their husband or partner plays an important role in violence and femicide motivation.

Femicide in the penal code: a recent demand of the feminist movement

Femicide is recognised as a separate kind of crime than homicide by the UN, the WHO and several feminist organisations, NGOs and other militant parties, yet most governments in the world turn a blind eye to the question. No European country has included femicide as a distinct offense in their penal code.

The UK Parliament only recently rejected a petition calling for femicide to be made a crime, stating: ”It’s not clear what the petition is asking the UK Government or Parliament to do. Murder is already a crime, so we’re not sure what you’d like to happen by creating a new offence.”

On the other side of the Atlantic though, there are 16 countries in Latin America which have introduced femicide as a separate offense in their penal code. The problem of gender violence in these countries is of course immense, but most importantly the feminist movement has been very dynamic and active in countries like Mexico, Argentina and Brasil.

It is an important and valid demand, asking that femicide be recognised as a separate crime, because it is. The negation to recognise this fact is a coverup of the sexism that exists in our society. Of course, introducing femicide to the penal codes would not solve the problem, nor stop femicides. If we see the figures in the tables listing the numbers of femicides in Latin America from the UN Women report we can see that violence is increasing or at best stays the same. However, it would provide a better picture of the extent of the problem and give more tools to our society to demand change.

In recent years there have been several cases in which conservative circles have tried or even managed to impose their agenda on the political and legal framework. Apart from the efforts to ban or decrease the right to abortion in several places in the world like Poland, Turkey or various US states, there is also a tendency from the alt-right for a “return to the traditional values”, according to which women should stay at home, take care of the children and the household. This has sometimes been reflected in the discussions in parliament or government decisions.

In 2020, Turkey decided to retreat from the Istanbul Convention, a convention which bound the signatories to increase efforts to fight against violence against women. The movement’s reaction has been immediate and very dynamic, yet the country’s choice is indicative of its political system’s orientation.

In Greece, there have been efforts from the far-right circles and the Church to reopen the discussion about abortion (which has been legal in the country since 1983) and to block a government decision about introducing sexual education in schools. A conference organised by associations connected to the Church, which intended to discuss women’s reproductive rights, and included only men and priests among the panelists, has been canceled by the reactions of the movement, yet the story cannot be considered closed.

All these voices are only serving capitalism’s objectives. Capitalism needs to control women’s bodies. Women represent a large part of the labour force in essential services. Apart from that, they are contributing to society by doing a huge amount of unpaid work (domestic chores, child care, care for the sick and the elderly etc), which according to a UN study amounts to some $11 trillion. This is a lot of profit and women’s emancipation might put this at stake.

It’s even worse if you are poor

Female oppression is of course a phenomenon that touches upon all social layers, yet working class women and women in lower social classes suffer disproportionately more than women in the upper class.

Unfortunately, gender violence is a lot higher among the poor. Poverty brings violence: according to an EIGE study, domestic violence in Greece has increased during the years of the deep financial crisis, reaching a 49% increase in 2013. Unemployment seems to be related to this increase, in 44% of the reported cases the abuser was an unemployed partner.

Material and financial means are essential for a woman who wishes to escape an abusive relationship. But working class women, even more if they are indigenous women in the US and Canada, or migrant and refugee women in Europe, cannot afford to leave an abusive partner or to get support.

Therefore, it is the role of the state to provide what are actually basic services for all: childcare, affordable housing and transport, care for the elderly, and access to health and education. Shelters for victims of violence, legal and psychological advice and support are of course equally important but they are not given for women of the working class. On the contrary, especially after the last decades of budget cuts to all social services, these essential services are becoming more and more scarce and of lower and lower quality, with long waiting times.

Violence is the extreme expression of patriarchy and capitalism

Since the beginning of the feminist movement, women were demanding legal changes, and indeed we have won a lot. Even when reactionary governments are trying to take them back, women’s movements have been many times successful to stop them.

Even with all the legislation, conventions and resolutions, which are important as they set a benchmark and show a positive direction, the problem of violence against women still continues.

That is because in order to eliminate violence against women, we need to end women’s oppression. Part of the measures to do that, are long standing demands of the feminist movement, which the capitalist system, not only does not want to fulfill but takes them back in any country that womens struggles have won them.

Some of these long standing demands of the feminist movement that we have to fight again for are:

All these demands are of course necessary not only for women, but for all. However, they are urgent for women who are trying to escape domestic violence. It is important to note though, that no long-standing solution for the problem is possible if this system of exploitation is not overthrown. In order for all people, including women, to live in a society where their needs are covered and they are united and not exploited, a socialist society is necessary. And in all cases, we need to be conscious that collective struggle and solidarity among all the oppressed and exploited layers of society is the only way to win these demands.