Making sense of Turkey’s withdrawal from the Istanbul Convention 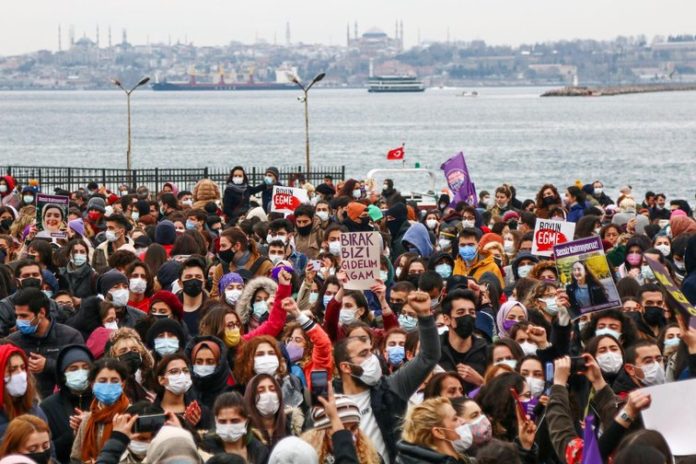 Almost ten year ago, in 2012, the Turkish parliament officially and unanimously ratified the Istanbul Convention on preventing and combating violence against women and domestic violence. Back then Turkey was among the first countries to ratify the convention and the move was applauded both domestically and internationally. A decade later, despite ongoing protests, Turkey has withdrawn from the Istanbul Convention by a presidential decree that was announced at midnight on a Friday night.

Ratification of the İstanbul Convention was essentially a victory of the women’s movement that has been fighting for ending violence against women for decades, along with the struggle from reproductive rights to equal work conditions. This retreat, however, was not a surprise for the movement.

The Istanbul Convention has largely remained on paper and the government did not take sufficient measures to improve gender equality. In fact, the violence against women never stopped. In 2020, 330 women were murdered in Turkey but the number of unrecorded cases could be far higher as femicides are often filed as suicide. This figure is significantly higher than it was in 2008, when it numbered 80. Indeed increasing rates of femicide is not an accidental event, but usually the last step in the cycle of violence and a sign and symbol of rising inequality. According to official sources, 40 percent of women living in Turkey have experienced physical or sexual violence at least once in their lifetime. There is no doubt that the real figure is much higher than this.

The question, however, still is, why a government that ratified the Convention decided to withdraw from it amidst increasing violence against women and ongoing social protest?

What we have experienced in the last decade was an increase in the attacks against women’s rights. The intense conflict between the ruling AKP (Justice and Development Party) government and the womens’ movement reached new dimensions and accelerated rapidly after the Gezi Uprising in 2013, right after the ratification of the Istanbul Convention. The AKP’s fear of social opposition movements, combined with the worsening economic situation, pushed the Party in the direction of using the defense of “the family” even more intensely than before and going against the rights of women.

Indeed, familism has emerged as one of the key ideologies (and policy strategies) of the governments around the world facing economic and social pressure. Coupled with rising conservatism and far-right populism, familism has enabled governments to consolidate a new power base. Familism, as an ideology, reinforces the idea that the women essentially belong to the family and their role is to sustain the values of the family as the core unit of society. Familism has been one of the tools in the hands of the ruling class to perpetuate gender inequality.

A reproductive familism always corresponds with a tighter control over the bodies of women and the first attack is usually against abortion rights. Abortion has been legal in Turkey for more than 4 decades. However, around 2010, the AKP government began to openly announce that the right of women to decide for their own body was “morally problematic”. After a massacre of Kurdish villagers by an aerial attack in 2011, in Uludere, Prime Minister Tayyip Erdoğan said, “every abortion is an Uludere”. Then Minister of Health, Recep Akdag also announced that, “let the raped mother give birth, if necessary, the state will take care of that child”.[1] These statements reflected the everyday projections of the government‘s policy.

Despite opposition from large sections of society, the government succeeded in de facto banning abortion for unmarried women. Policies to support population growth, such as maternity leave and child support have also been widely promoted.

AKP’s enmity towards LGBTIQA+ people, especially in the last few years (particularly after the July 2016 coup), is another reflection of its emphasis on familism.[2]  Feminism and LGBTIQA+ have been presented as “Westernist ideologies”, and this attitude has enabled the defense of heteronormative patriarchy to be portrayed as “anti-imperialist”. Given that Turkey has a long tradition of anti-westernism specifically among the conservative masses, this ideological re-packaging increased the power of the government discourse.

For the AKP government and Erdogan, withdrawing from the contract would also promote the agenda of the religious sects, which are dominated by males. This move, the AKP hoped, would consolidate electoral support. At the same time, Erdogan’s withdrawal from the convention also meant that the one-man regime was making a show of power, expanding its sphere of influence and alliances.

Violence against women as a structural institution

The Istanbul Convention, if it had been implemented (even partially), would require a series of protective measures to be taken for women, like: infrastructure investments to create employment for women, increasing educational opportunities, infrastructural measures to prevent domestic violence from occurring, reduction of women’s obligations in relation to the family, etc.

However, it is not enough to classify patriarchal violence only on the basis of physical, sexual, economic and psychological violence; patriarchal violence includes all behavior that injures/harms the dignity and integrity of a woman, gay, bisexual or transsexual. That is, of all those who are seen below or outside in the binary gender system.

As mentioned before, a key institution that reflects and reproduces the continuity of male domination, capital accumulation and the state, is the family. For this reason, the Istanbul Convention was actually seen by Erdogan’s regime as a tool that weakens the ideology of familism and therefore had to be eliminated. Women are systematically exposed to violence or continue their lives under the continuous threat of facing violence – and the family is the place where this violence is experienced the most.

Official state data on violence against women in Turkey are not disclosed today. Only, according to the results of the research conducted by the relevant official institution in 2008 we know that at least 40 percent of women have been subjected to physical or psychological violence at least once in their lives.[3] We have every reason to believe that the situation today is significantly worse than in 2008.

Another issue that should be emphasized regarding violence is the intertwining of male violence and state violence. The “maintenance of order” in the public sphere, requires the generalized use of violence in all spheres of life – thus the violence applied by the state is perpetrated by men in the private sphere. In this respect, there is a certain parallel between the violence of the state against the society and male violence. As a matter of fact, according to the available data male violence has increased along with state violence, especially after the turning points of 2013 (Gezi protests) and 2016 (coup attempt).

Ignoring laws, treaties and the Constitution

Turkey’s withdrawal from an international agreement by Presidential Decree goes even against the Turkish Constitution, which was drawn up by the ruling “Justice and Development Party” (AKP) and Erdogan.

According to Article 90 of the Constitution, international conventions should be agreed to or withdrawn from, only by passing a law in the Assembly(parliament). However, as a result of extreme personalization of power, even the deputy general managers in the different ministries are appointed by the President himself. From transferring a municipal land to a foundation, to withdrawing from an international agreement, to appointing government officials, all decisions are taken by the one-man regime.

The Istanbul Convention was activated in 2014, and according to the Turkish Constitution all international treaties are supposed to be above national law. However, the Convention was never really implemented.[4] For example, perpetrators’ strategies of victim-blaming have been increasingly successfully used before criminal courts, which themselves abuse the legal clauses regarding unjust provocation or good behaviour.[5]

In the face of this, the main opposition in the country appealed to the judiciary and demanded the rejection of the presidential decree, but the judiciary’s response was as follows:

“We can wait for the approval of the law from the Parliament, but it is the duty of the executive to make it or withdraw it”.

Thus, the judiciary proved once again that it has lost its relative autonomy and has become a constituent part of the AKP regime, and would not shy away from breaking the very laws that it is supposed to defend.

Women’s struggles have a long history in Turkey.[6] While withdrawal from the Convention has been widely discussed since 20th March, the women’s movement has also responded with increased actions across Turkey. Women have taken to the streets in at least ten provinces. “The Istanbul Convention is Ours”, “Withdraw your decision, implement the Convention” have been the most pronounced slogans. Demonstrations and protests have since been taking place in all the big cities non-stop.

The women’s movement has been calling for the implementation of the convention on the streets for the past few years. As soon as the discussion about the withdrawal began in 2019, the social protests intensified. And despite the state of emergency that was declared after the 2016 coup attempt, women increasingly took to the streets. The radicalization that started in big cities, especially between March and July of this year, did not retreat even though police violence increased. When the withdrawal from the contract became official, the women took to the streets again.

There is no doubt that an international convention cannot end violence against women. Although the Istanbul Convention was a step forward, it doesn’t get close to what is needed. It is the patriarchal capitalist order, which sees human beings in general and women in particular as a commodity, that produces violence against women and girls. Only the destruction of patriarchal capitalism will end violence against women. However, conventions provide at least partial protections for women and girls and enable the society to push the states to implement these measures, albeit reluctantly.

Thus, withdrawing from the Istanbul Convention is not just a problem for Muslim-conservative Turkey. Capitalism’s dependence on family ideology and violence causes it to take one step forward and two steps back. However, this does not mean that we stand back from the struggle for the re-signing of the Istanbul Convention. But at the same time a primary goal of ours is for women to see the real causes of violence against women, to fight against it together and to join the struggle to overthrow capitalism. We will not stop until this is achieved. We will continue to fight to prevent violence against women, to stand in solidarity with women who are victims of violence, and to ensure that perpetrators are punished. Here and everywhere.

[2] Thus, of the countries that signed the convention but did not put it into effect, Slovakia in February and Hungary in May 2020 refused to ratify it because it is “contrary to their constitution, which defines marriage as a heterosexual union”.

[3] However, we have reasons to think that this figure is much higher: First, it requires a certain awareness for women to know the definition of violence. Especially psychological and economic violence, types of violence that are difficult to define. Second, women fear or refrain from “reporting” violent men, more than 90 percent of whom are first-degree relatives. Third, women see violence as a problem that arises as a result of their own fault and may prefer to hide it shyly.

[4] This of course is also true for European countries that abstain from meeting the material infrastructure and needs of women and girls required by the Convention, but the situation in Turkey is much worse.

[5] opendemocracy.net: Why Turkey’s withdrawal from the Istanbul Convention is a global problem

[6] For example, feminist groups pushed for Turkey’s ratification of the UN Convention on the Elimination of All Forms of Discrimination Against Women in 1985 and successfully pressured the government to lift its reservations in 1999. In addition, alliances across women’s organisations helped push for a new civil code in 2001, which recognised the full equality of women and men in marriage, and a new penal code in 2004, with progressive changes in punishing femicides, rape in marriage, sexual harassment, child abuse, and other sex crimes that perpetuate women’s inferior status. (agy).