The New Deal of the 1930s, Keynes’s views and the capitalist crises 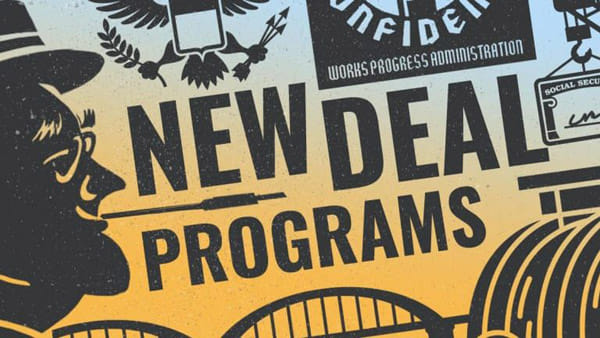 This is a second article on the ‘30’s, you can read the firt article here

“So, first of all, let me assert my firm belief that the only thing we have to fear is… fear itself”

Those were the words Franklin Delano Roosevelt used in the opening of his inauguration speech as President of the United States in early March 1933. A few months before he had won the election, as a candidate of the Democratic Party, with 57.5%, against the Republican Herbert Clark Hoover who had been in office until then.

Roosevelt’s election opened a new chapter in the US history, as his policies regarding state intervention in the economy contrasted with the “classical school of economics” as well as with the ideology of the “free market” that had hitherto prevailed worldwide.

Roosevelt started his presidency with a dynamic “100 days programme” which incorporated a number of important measures aiming to tackle the crisis. In general, the New Deal was a huge public spending programme, and constituted a turning point in the field of bourgeois economic policies.

Some of the key measures of the New Deal were the following:

Roosevelt’s measures certainly gave some relief to the masses.

It’s only logical that someone asks: “but how”? How can a capitalist government take measures that have a positive effect on the living standards of the workers at the expense of the capitalists’ share in the national income, while challenging the capitalist doctrine of the free market? The answer should be sought in two factors: first, in the depth of the economic crisis in the global economy after the crash of 1929; second, in the fear of the capitalists against the social and political implications of the economic crisis, which could challenge the survival of their system.

Let us let Roosevelt himself speak:

“No one in the United States believes more firmly than I in the system of private business, private property and private profit. … If the Administration had had the slightest inclination to change that system, all that it would have had to do was to fold its hands and wait – let the system continue to default to itself and to the public. Instead … we acted quickly and drastically to save it. It was because of our belief in private enterprise that we acted quickly and drastically to save it”
(The contradictory imperatives of New Deal banking reforms – Ellen D. Russell).

It’s evident therefore that Roosevelt, the Democrats, and parts of the American capital and the establishment that supported them, had no “leftist” sentiments. Their only guide was that they acknowledged that they had to do something to save their system. The crisis was so deep, and their fear so great, that they were forced to resort to an unconventional (by their own standards) treatment. Factors that added to this fear were:

In short, Roosevelt expressed the more “far-sighted” part of the US ruling class that understood that it had to make significant concessions to survive under the internal and external pressures on their system.

In essence, the New Deal was the first practical application of the views of John Maynard Keynes, a British economist who began to formulate a new economic theory in the 1920s, known as Keynesianism.

Keynes did not belong to the Left, despite the fact that Keynesian politics might seem related to some of the demands of the Left in the minds of many people. In his own words:

Referring to communism he said:

“How can I accept the Communist doctrine, which sets up as its bible, above and beyond criticism, an obsolete textbook which I know not only to be scientifically erroneous but without interest or application to the modern world? How can I adopt a creed which, preferring the mud to the fish, exalts the boorish proletariat above the bourgeoisie and the intelligentsia, who with all their faults, are the quality of life and surely carry the seeds of all human achievement?”
(The worldly philosophers -R. Heilbroner).

And, as for the trade unions he wrote

“once the oppressed, now the tyrants, whose selfish and sectional interests need to be bravely opposed”
(John Maynard Keynes – Hyman Minksy)

Keynes therefore developed a theory aimed at rescuing the system from itself.. His basic proposition, which came in contrast to the prevailing “classical school of economics”, was that in times of crisis the state needs to intervene to stimulate demand in order for the economy to recover. When there is a crisis, he said, workers have no income to buy products (thus demand decreases) and capitalists have no incentive to invest. So public investment as well as public spending need to increase in order for the economy to be put into motion. The state must create jobs, either directly or indirectly, and in this way the purchasing power of the working class in general will increase (the unemployed will acquire a job). The increase in the purchasing power of the mass of the population will be reflected in the increase in demand for goods and services and this in turn will give impetus to the capitalists to increase production and proceed to new investments.A phrase of Keynes that became widely known and that shows the extent of his logic is the following:

“If the Treasury were to fill old bottles with banknotes, bury them at suitable depths in disused coalmines which are then filled up to the surface with town rubbish, and leave it to private enterprise on well-tried principles of laissez-faire to dig the notes up again (the right to do so being obtained, of course, by tendering for leases of the note-bearing territory), there need be no more unemployment and, with the help of the repercussions, the real income of the community, and its capital wealth also, would probably become a good deal greater than it actually is. It would, indeed, be more sensible to build houses and the like; but if there are political and practical difficulties in the way of this, the above would be better than nothing”.
(The General Theory of Employment, Interest and Money – John Maynard Keynes)

He thus disagreed with the logic of the “invisible hand of the market” which is supposed to intervene automatically, to ultimately bring the system into balance, either in times of growth or in times of crisis.

In this sense, Keynesian theory is more grounded in reality in times of economic crisis than the liberal views of “laissez-faire” (which dictates to let the system work on its own without any interference by the state). Keynes was able to see beyond the short-sighted individual capitalist, who is solely concerned with his/her personal profit. In fact, Keynes (like Roosevelt) expressed the more “far-sighted” section of the bourgeoisie that understood that it needed to fix some of its problematic aspects, even if there were some cost that had to be paid. His theory praised the progressive role of the “productive capital” as opposed to the “parasitic capital” (meaning financial capital, bankers, rentiers, etc). He spoke (as a pursuit and as a prediction) of the “euthanasia of the rentier”, that is, of the capitalist who makes profits on interest- referring in essence the bankers and the large property owners.

Keynesianism, as a theory, dominated economics until the early 1970s. Until then it was assumed to offer a “solution” to the problem of the cyclical crises of capitalism. At the same time, it was used politically to relax pressure on governments that were faced with workers’ demands and struggles. The “solutions” of Keynesianism, however, proved to be very temporary.

The failure of Keynesianism and World War II

At first glance, Keynes’ ideas seem to many people on the Left, but also many workers, appealing and even effective: when “private initiative” fails, the state intervenes; it restarts the economy, and then it withdraws again and all is well. In practice, however, this is not how things work.

First of all, Keynes does not see the essence of the problem, that is, how and why are the economic crises of capitalism created in the first place and why they are unavoidable. Capitalism leads to crises essentially due to the fact that a super-rich elite reaps the profits of production which are the result of the work of the vast majority of society. The real cause of the crises escapes Keynes, and that is why his “medicine” is nothing but a simple makeshift “remedy”. Keynes’ predictions that the bankers will disappear seem tragic today as the banking sector and finance capital in general vastly dominate the economy. His prediction that the application of his policies would lead to the elimination of the crises and unemployment, were also proven wrong. Finally, the Keynesian policies wherever they were implemented, actually led to a large increase in state deficits, public debt and inflation. This cost was to be paid at a later stage by the workers who benefited from the “expansionist” policies of Keynesianism in its initial application..

Overall, neither the New Deal nor Keynesianism solved the crisis of ’29. It was “solved” in a horrible way by World War II. Huge warfare expenditures, more than 50 million deaths, the destruction of factories, infrastructure and cities, functioned as a “regenerating” economic boost. A system that overcomes its crisis only through destruction, this fact alone, should suffice as a condemnation of capitalism.