Sri Lanka: The storming of the presidential palace and what lies ahead for the people 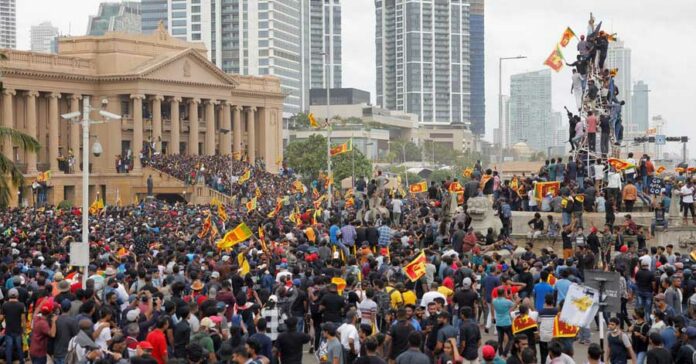 As the crisis in Sri Lanka continues and deepens, the massive anti-government protests that took place on Saturday, July 9th, in the capital Colombo, culminating in the storming of the presidential residence of Gotabaya Rajapaksa, are an inspiration for workers and the poor masses around the globe.

President Rajapaksa had taken the precaution of departing from his luxurious residence in view of the planned demonstrations on July 9th. That evening he announced his intention to resign, following the path of Prime Minister Ranil Wickremesinghe, who had also announced that he would resign if an interim government was formed.

On Wednesday, July 13, Rajapaksa fled the country in a military plane bound for the Maldives according to the Sri Lankan Air Force. At the same time, he appointed Prime Minister Vikremesinghe as interim president. A curfew has been imposed in the capital Colombo and the government has declared a state of emergency. As of Thursday July 14th, Rajapaksa has been in Singapore, where he sent a message that he was officially resigning, which has prompted celebrations from the Sri Lankan movement.

The events of the past few days are the culmination of protests that have spread across Sri Lanka since last April, as the country faces its worst economic recession since independence from the United Kingdom in 1948.

It is the result of growing anger among the broad sections of the population due to fuel shortages, rising inflation and proposals by the IMF, in consultation with the government, for further austerity measures to secure a $3 billion loan agreement.

Last month, annual inflation reached 54.6% while (official) food inflation reached 80%. In other words, prices for all basic commodities have skyrocketed. The health system is collapsing amid shortages of medicines and medical supplies. Workers’ wages have been cut by 50% in real terms. More than 70% of the population is forced to skip meals during the day due to food shortages!

The fact that foreign currency reserves are almost exhausted makes it practically impossible for the country to pay for food and fuel imports. The huge queues for essentials such as milk, flour and sugar, and the queues formed by vehicles waiting for a few litres of petrol, show the extent of the crisis. The constant power cuts, the grinding halt of public transport and the paralysis of public services led the government to close schools and impose forced teleworking.

These developments have sent shock waves to the country’s establishment. Thus, through desperate moves, it is trying to set up a temporary government of all parties (“unity government” as they call it) in order to maintain its rule.

Indicative of their prevailing fear is the statement issued by the country’s Chamber of Commerce on Friday 8 July, calling on the president to resign and party leaders to ensure a smooth transition of power, stating specifically:

“…the Chamber calls upon all political party leaders to come together at this time of grave crisis and act in the best interest of the nation to arrive at a consensual decision that will pave the way for a smooth transition of power in accordance with the constitution. It is hoped that the party leaders will put aside their ideological differences and get together as Sri Lankans at this historic moment to save the country from falling into anarchy.”

On Sunday, July 10, leaders of opposition parties met to discuss the formation of an all-party coalition government, including the Sri Lanka Podujana Peramuna (SLPP), the party controlled by the Rajapaksa family.

It is most likely, of course, that whatever government is formed by the establishment parties will be faced with the protests of the Sri Lankan people. After all, all these parties are committed to implementing the agenda with the IMF demands in order to ‘save’ the country from bankruptcy.

The ‘rescue’ of the country by the IMF, of course, will mean nothing but new attacks on the living standards and rights of the working people. Already, the IMF has prepared an austerity programme that includes

In other words, the recipe that has been applied in dozens of countries internationally that have found themselves in a similar economic situation, with well-documented disastrous results for the lives of millions of people.

These developments have shaken not only the Sri Lankan establishment, but are causing concern among capitalist analysts internationally. The looming crisis in the world economy, together with the energy and food crisis that are already here, will cause political instability and social explosions in a number of countries, especially in the ‘developing world’.

…and the unity of the workers

Sri Lankan workers and youth have nothing to gain from such a ‘unity government’. The only unity that can really turn the tables is the unity of the workers themselves, the youth and all the oppressed strata on a class basis. This unity must obviously include all ethnicities living on the island, and especially the oppressed Tamil minority.

Rajapaksa’s resignation is a first major victory for the movement in Sri Lanka, but the battle is far from over. The fact is that the processes in the country are historic and contain revolutionary elements.

With regard to the cracks in the regime caused by the uprising, it is typical that the former head of the armed forces, Sarath Fonseka, former army chief and not progressive at all, has called on the soldiers “to refrain from using their weapons against innocent and unarmed citizens and to instead use them against corrupt politicians”.

The movement of the workers, the youth and the poor people of Sri Lanka, in order to be able to achieve its goals of humane living conditions and to address the huge economic and social problems, it should, on the one hand, clearly reject any possibility of a government consisting of the same rotten establishment parties under the cloak of ‘unity’ and, on the other hand, prepare to fight for:

To make all this possible and to enable the economy to withstand the pressure of the “markets”, i.e. local and international capital, it is necessary that the above measures are combined with the nationalisation of strategic sectors of the economy (under workers’ and social control and management so that they operate democratically). Only in this way can resources be harnessed and the economy function in a way that serves social needs and not capital’s profits.

To the extent that the movement in Sri Lanka can advance and escalate its struggle, it will find support from millions of workers around the globe. For it is certain that too many workers internationally are watching developments and hoping for victorious struggles. Along with struggles, of course, there are always conclusions and lessons learned. These, again, are not only relevant to the movement in Sri Lanka, but also to the corresponding movements all over the world, present and future.