France: Some points on the presidential elections and the responsibilities of the Left 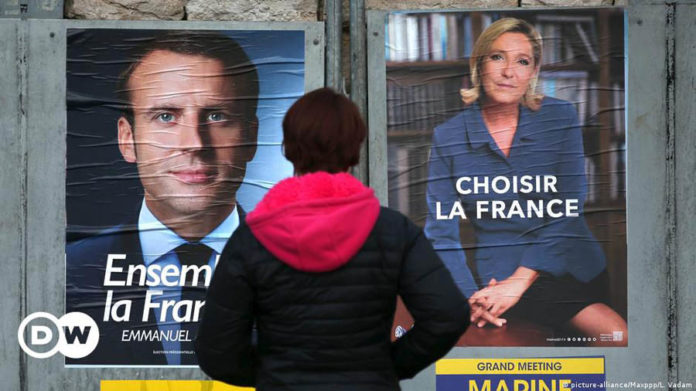 For workers and youth in France, in Europe and worldwide, the results of the French presidential elections of April 10th evoke mixed feelings.

On one hand, disappointment that Emmanuel Macron and Marine Le Pen, with percentages of 27.85% and 23.15% respectively, managed to get through to the second round again, as in 2017.

On the other hand, concern for  the tight difference in the second round according to polls (at the time of writing, on April 15th) and the fact that M. Le Pen has more chances this time to be elected  the country’s first far-right president.

But also, people are satisfied by the electoral performance of Jean-Luc Mélenchon, who came third with only 400,000 votes less than M. Le Pen. He got 21.95% of the vote, one of the best results by a left-wing candidate since the introduction of the presidential system of government in 1958 (the so-called 5th French Republic).

This result is even more significant, considering that it comes after the electoral collapse of left-wing formations in Portugal (January ’22) and Germany (September ’21), showing that there is still potential for the Left to score big election results.

The simultaneous electoral rise of the Left and the far-right gives a vivid picture of the opportunities and the dangers that characterise the situation in the class struggle and consciousness in general  in our epoch.

Macron: the choice of the ruling class

Macron scored a rise both in percentages (+3.8%) and votes (+1.1 million) compared to 2017. This is neither a reward for his previous 5-year term nor a blank cheque for the future. In fact, Macron was boosted by the electoral crushing of the Socialist Party candidate, A. Idalgo (1.75%) and of the traditional right-wing Republican candidate  V. Pecrez’s (4.78%); these are the main two parties that have ruled France for six decades. Thus, Macron became the ruling class’ chosen one. In fact, the two previously dominant parties did not even reach the 5% threshold to qualify for the state subsidy for their election expenses and are entering a period of de facto deep crisis!

Macron also needs to  try to attract back the protest votes and lure in left-wing voters until 24 April. In other words, he needs to win back  those who have most  suffered from his policies; the reduction of taxes on the rich from 33.3% to 25%; the change in labour laws and the facilitation of mass redundancies; the mismanagement of the pandemic which has cost 142,900 lives to date, etc.

To this end, he hypocritically announced his intention  to discuss raising the minimum pension to €1,100 (from €900 today) and even mentioned raising the retirement age to 64 (from 62 today) instead of 65 as he insisted until the first round.

At the same time, he is pointing his arrows at M. Le Pen, trying to present himself as the “guarantee for democracy”. But he is less convincing than ever, as he was the man behind the extreme repression against the Yellow Vests movement (10 protesters dead and 1,843 injured) and the legislation to impose practical impunity for police violence.

Few months ago, the explosive rise of Eric Zemmour, another far-right figure, in the polls, had posed the issue of hegemony in the ranks of the French far-right. In retrospect, it is clear that with his even more extreme positions, Zemmour practically helped M. Le Pen to present herself as a “moderate” far-right candidate that could play a role in developments, unlike her “extreme” far-right counterpart.

With her campaign slogan, “In the name of the People”, she tried to present herself as a pro-worker and pro-poor politician, promising cuts in electricity and gas prices and heavier taxes on hiring foreign workers instead of French ones. At the same time, she opposed raising the retirement age to 65. It is to be noted though, that she stopped proposing France’s immediate exit from the EU and the euro as she used to.

But behind the velvet mask of the “moderate” lies a harsh anti-worker and anti-refugee agenda.

This includes: banning strikes in public services, holding a referendum on immigration, changing the Constitution to exclude non-French nationals from social benefits, a universal ban on the headscarf in every public space and other similar measures that will turn migrants and refugees into the scapegoats of the crisis of French capitalism.

According to the polls, only one in two voters are “worried” about the possible victory of M. Le Pen, while 46% consider that she “has a good understanding of the problems of citizens”, compared to 27% for Macron! This of course is more proving for Macron’s shortcomings than about Le Pen’s virtues.

More generally, Le Pen has tried in this election to present herself as a force closer to the “moderate” far-right of the likes of Trump, Salvini, etc. than to the “radical” far-right associated with racist street attacks, organized neo-nazi gangs, etc. And this obviously had an effect on the results by helping her to gather  “protest votes” and not just far-right voters.

Given these facts, it seems that there can be no repetition of 2017, i.e. a clear victory for E. Macron by a large margin. This time there are more counterposing forces that will determine the outcome.

On the one hand, the French and European establishment, as well as US imperialism, prefer a victory by Macron to avoid convulsions in the EU block and the rebalancing France’s geopolitical status quo, while the war in Ukraine rages and the US-China conflict over international domination is at full play.

On the other hand, the mood for a protest vote and the anti-Macron sentiment have their own dynamics, which can take the form of either abstention/blank votes, or a vote in favour of M. Le Pen by some layers of the population. After all, the credibility of those who called for a vote to E. Macron in the name of “protecting democracy” is very limited.

At the opposite end, M. Le Pen has secured E. Zemmour’s and the far-right N. Dupont-Aignan’s (2.06%) support. But for older generations of workers, for Muslims, for second or third generation immigrants and for many activists, Le Pen continues to represent a major danger.

It is obvious that part of these layers will go out to vote for Macron with a very heavy heart, in order to prevent the far-right Le Pen from being elected, following the logic of the lesser evil. This is an objective fact, and the left must not build up barriers against those who will choose to do this. However, a position calling for (or implying) a vote for Macron would be wrong. On his election night speech, Melanchon repeated 3 times “no vote for Le Pen”, which is correct, but he did not mention whether Macron should be voted for, which would be wrong. Le Pen does not represent at present an imminent  threat to basic democratic rights, as a clearly fascist force would represent, in which case such a position would be understandable. A possible support for Macron by the Left  effectively strengthens the French establishment, whose policies have caused the rise of the far right!

In any case, whether Macron or Le Pen moves into the Elysée on April 25, anti-labour, neoliberal and austerity policies will be pursued, and this is why the labour movement, the youth, the anti-fascist movements and the Left need to be alert, organising mass and unified mobilisations!

A first indication of this is the occupation of the University of Sorbonne by it’s students and the youth mobilisations organised these days under the slogan “Neither Macron, nor Le Pen” (Ni Macron, ni Le Pen)!

Behind the rise of Mélenchon

The social mapping of J. L. Melenchon’s voting base is very interesting, as are his impressive results in certain regions or cities.

In a number of working-class suburbs of Paris, he got spectacular results. For example, 49.09% in Seine-Saint-Denis, 64% in La Courneuve, 55.22% in Montreuil, 53.83% in Pantin, 61.13% in Saint-Denis, 54.20% in Villepinte, 60% in Gennevilliers. Overall, Mélenchon came first in terms of votes, in five of the eight departments of the Ile-de-France region surrounding Paris! So did he in Marseille, Toulouse, Montpellier, Lille, Strasbourg, Le Havre, Rouen, Amiens, Mulhouse, Nantes, Rennes and Grenoble, while in Lyon there was a close race with E. Macron.

Mélemchon was also first in the French Antilles in the Caribbean, he got 56.16% in Guadeloupe, 53.1% in Martinique, etc.

Most importantly, Melenchon came first among those French people who identify themselves as Muslim, taking 70% of their votes! These are obviously either 2nd or 3rd generation immigrants, or descendants of people from the former colonies of France.

Mélenchon also won a majority among those voting for the first time in their lives, and according to a poll, he got 38.4% of the vote among voters aged 18-24.

Not out of the blue

A number of radical positions clearly contributed to the rise of La France Insoumise. Among these, it is worth mentioning:

Like any reformist programme though, even when it includes the right points to attract broad sections of workers and youth, the problem with Mélenchon’s programme, is that it does articulate anything concerning the need to challenge the power of big capital. And in that sense, it does not answer the question of how all of the above could realistically be implemented in the present era.

The success of La France Insoumise was also based on the militant campaign that combined door-to-door distribution of material, many massive local rallies, a special Youtube channel that reached 700,000 followers, etc.

All this worked in a background created by the multiple crises of capitalism, the pandemic and the climate crisis, on the one hand,  and big movements such as the Yellow Vests, the social uprising against the change of the pension system and the big demonstrations for the environment, on the other.

Mélenchon’s success is even more noticeable if we take into account the fragmentation of the French Left as reflected in the parallel existence of four other candidates: G. Jadeau of the Greens (4.6%), F. Roussel of the French Communist Party (2.28%), F. Poutou of the New Anti-Capitalist Party- NPA (0.77%) and N. Artaud of the Workers’ Struggle- LO (0.56%).

In other words, it has been impossible for the Left to create even a common electoral front with one candidate, even in these circumstances, when it was obvious that there was no possibility for the Left to make it to the second round. A common front does not necessarily mean a fusion of different political currents- they could keep their own autonomy while campaigning for the same candidate. It seems that the responsibility for this failure lies both with Mélenchon and the rest of the Left.

Had it been otherwise, a common candidate of the Left would most probably have made it to the second round (adding up the percentages of different candidates, they override those of Le Pen), but the dynamics of a united front could have a multiplying effect and would constitute a real alternative for the working classes against Macron.

Even if such an alliance would not succeed in defeating Macron in the second round, it would create a completely new context for French society as it would place the possibility of the Left winning the next election on the table in a concrete way.

To this day, La France Insoumise, the party headed by Mélenchon, is a very loose formation of small groups of supporters, which operate more like an electoral mechanism during election periods and become inactive afterwards.

However, among its 7,714,000 voters, there will be tens of thousands ready to organise and fight collectively, to the extent that a mass, militant and above all democratic party of the Left is created. In reality, workers, youth, migrants, refugees, women and movement activists have no other way to oppose E. Macron, M. Le Pen and the French capital. They need their own party and their own comprehensive programme to break with capitalism and create a socialist society, a workers’ democracy. This battle must be fought so that another historic opportunity is not lost!