Elections in Chile: a slap in the face of neoliberalism – what policies will Boric pursue? 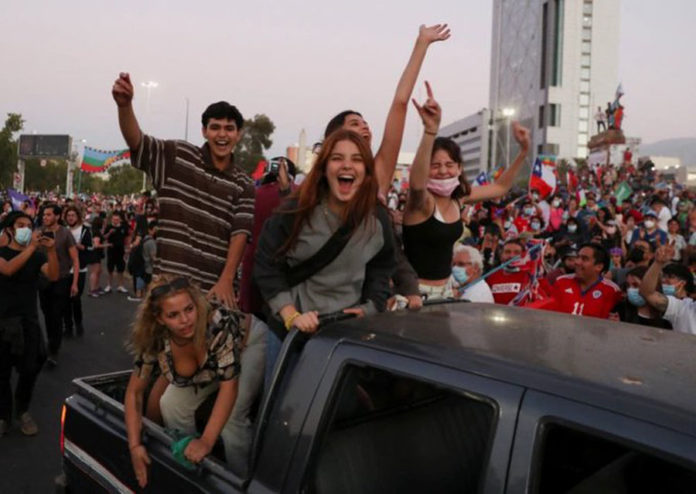 The victory of the leftist candidate Gabriel Boric in the second round of the presidential elections in Chile on Sunday, December 19th, was greeted with relief, joy and jubilations among wide layers of workers and youth in the country. At the same time, this development is being intensely discussed in the movements and on the left, not only in Latin America but also internationally.

Boric, despite coming second in the first round, eventually managed to take the lead from the right-wing reactionary Jose Antonio Kast, with 56%-44%. His 4.6 million votes (compared to 3.6 million for Kast) make him the president who has been elected with the largest number of votes in the country’s history. Turnout in the second round reached 55%, the highest percentage in a presidential election since voting stopped being mandatory in 2012.

A decade of turbulence

But how did Chile come to the most polarised elections since the end of the dictatorship and a major defeat for “Pinochetism”?

This development comes as a consequence of the radicalisation and shift to the left in Chile, as the country has been shaken by mass movements over the last decade.

Just to name some examples: in 2011, important student mobilisations unfolded, in which Boric played a leading role as a student, in 2016, 2 million people protested against the social insurance reform, 2019 was of course marked by the autumn uprising that started with the youth revolting against an increase in public transport fares and was soon generalised – an uprising that also included revolutionary elements.

It was an uprising against the right-wing President Piñera, but also against the extreme neoliberal policies implemented in Chile since 1973, starting with the Pinochet dictatorship and continuing after its end in 1990 – until today. This uprising forced Piñera to make important concessions. At the same time, it forced the Chilean establishment to call elections to convene a Constituent Assembly, which will be responsible for drafting a new Constitution to replace the current one (in force since the dictatorship) – a process that is currently underway.

Given the above, part of the Chilean establishment did invest in a “law and order” candidate, a figure modeled on Trump and Bolsonaro, to strike a blow against the movement and decisively secure the ruling class’s interests. Kast is a reactionary, far-right populist, an avowed supporter of the Pinochet dictatorship, an opponent of constitutional revision and an advocate of neoliberalism. In his election campaign he said “this December we won’t just elect a president, we will choose between liberty and communism “. He took positions against abortion, same-sex marriage, immigrants, indigenous people. He denies climate change and calls the precautionary measures against Covid a “health dictatorship”. Not unrelatedly, Kast’s father was a member of the Nazi party in Germany…

These extreme positions though, as well as right-wing forces rallying around his candidacy, have backfired and created a very strong current against him. This was typically expressed by the 1.2 million additional voters who came up in the second round and were mainly directed towards Boric.

Boric: from the leadership of radical movements…

Boric’s candidacy with the Apruebo Dignidad (I vote for dignity) alliance was supported by a broad cooperation of left-wing forces* in the 1st round, although he opened up to the “center” parties in the 2nd round, trying to rally the anti-right wing vote.

During the election campaign he promised to “burn down” the economic model left over from the Pinochet dictatorship, to increase taxes on the super-rich in order to further develop social services, to fight against inequality and to implement policies in favour of environmental protection.

His programme included, among other things, considerable wage increases, a shorter working week, universal access to the health system, cancellation of student debts and the abolition of private insurance.

These demands gathered around him a significant part of the movement: left-wing militants as well as indigenous and ordinary people; people who saw his candidacy as an alternative to decades of neoliberal policies and especially against the prospect of a reactionary Kast presidency.

…to “president of all Chileans”

However, already during the weeks between the 1st and 2nd rounds, Boric began to “water down” his program. As Noam Titelman, co-founder with Boric of the Frente Amplio political movement, points out in an interview to the BBC:

“Especially for the first round, he set a massively ambitious program, but in the second round the focus of his campaign just changed completely. His focus was set mainly on the idea that he had to unite a broad coalition behind him. Partly because there is not a clear majority in Congress, so he needs to seek α political deal with other forces.”

In fact, as the second round approached, Boric has been steadily moving to more “centrist” positions, away from the demands that pushed millions of Chileans to the streets in the Autumn of 2019.

At his post-election speech [https://www.aljazeera.com/news/2021/12/20/gabriel-boric-wins-chiles-presidential-election] during the election night, he clearly said:

“I will be the president of all Chileans.”

It is obvious that a left-wing president should be able to care for all citizens’ rights, regardless of their political beliefs. The question is whether Boric will clash with “all those Chileans” responsible for the current dreadful situation of the country: the political establishment, the economic elite, the security forces who killed, tortured and raped during the uprising, etc. There cannot and should not be a reconciliation with these criminals. In this sense Boric’s message is in the wrong direction. We already have the bitter experience of Syriza in Greece. When this left-wing party was elected into government it tried sail on two boats at the same time.

You can’t sail on two boats

Boric – like any similar leader – is not able to serve both the needs of the working class, the poor and the majority of the population and at the same time get along with the ruling class and the capitalists by stating that he is a “president of all Chileans”.

In order to implement a pro-working class programme, which he initially promised, he would have to actually commit himself to break with the powerful economic interests and the ruling class. He would need to nationalise strategic sectors of the economy, in order to find the necessary resources for social policies. If he decided to fight this battle, most of the people would stand by his side. But he has not done so.

Even if Boric seeks to compromise with the elite though, his election opens up possibilities for a new period for the movement. Kast’s defeat and the breeze of euphoria across the left can be a booster for the movement’s confidence. This is what the establishment is afraid of; this is the reason why the stock market and the Chilean peso dropped after the elections – a very telling move revealing the response of the ruling class.

Faced with this situation, the ruling class has two options. Either to move aggressively, trying to undermine Boric by any means, or to try to integrate him into the system. Latin America’s recent history is offering rich examples for both options. For now, it looks like the second option is preferred.

Which way to go

In any case, the movement of the working class and the popular strata as a whole are the decisive factors.

The autumn 2019 uprising proved that even the harshest neoliberal governments and presidents are not invincible. It showed that mass mobilizations can achieve historic victories – such is the case of the Constituent Assembly and the revision of the dictatorship’s Constitution.

At the same time, it is necessary to draw conclusions about the leaders of the movements and the Left who quit the struggle half-way; who attempt (out of good will or with the purpose of deceit) a reconciliation among incompatible elements, who do not have the courage to step forward and confront the establishment.

The outcome of the ongoing battle is in the hands of the Chilean people and the rest of the world is following developments closely.

In any case, events in Latin America have opened a new chapter, which is offering important lessons to movements and the left internationally. In the last 2 years we have seen either major movements and uprisings, or electoral campaigns leading to a victory of leftist candidates in most of the countries on the continent. We are inspired by these developments and we strive to spread and deepen them!

* Apruebo Dignidad consists of 2 separate coalitions of 9 parties, Chile Digno (Decent Chile) led by the Chilean CP and the Frente Amplio (Broad Front) where Boric is coming from.