Cyprus: Free and safe abortions for all are a basic health care right! 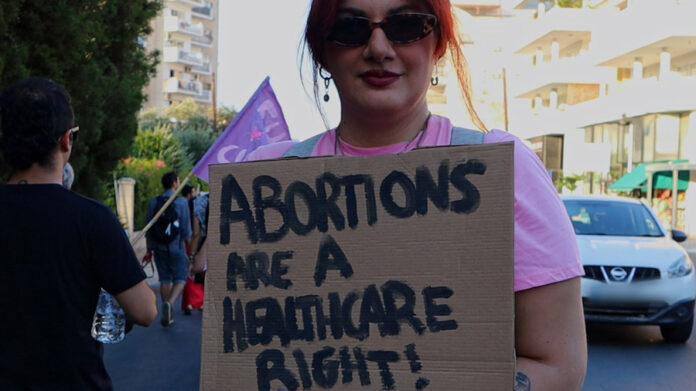 On July 8, feminist organizations gathered outside the US Embassy in Nicosia, in solidarity with the movement in the US, and then marched outside the Cypriot Ministry of Health demanding free and safe abortions for all in Cyprus.

On June 24, the US Supreme Court decided to overturn the Roe v. Wade ruling that established abortion as a constitutional right.

When the most industrially developed capitalist country attacks women’s rights in such a brutal way, this cannot but create an “example” for other reactionary governments all over the world.

The developments in the US led women in Cyprus to look into what exactly is happening here with our reproductive rights. This quest, started by women through social media, revealed the need to fight to safeguard the right to abortion.

Abortion in Cyprus were criminalised by the Criminal Code prepared and put into force before the independence of Cyprus from the British Colonial Administration in 1959.

In the northern part of Cyprus, women were also subject to the Criminal Code of 1959, chapter 154. However, from 1983 onwards, abortions were provided in the private sector. This stemmed from the 28th article of the 1983 Law on the Turkish Cypriot Medical Association, which allowed abortions on demand up to the 10th week, and after the 10th week only with the written consent of the husband or the custodian if the woman was under age. In 2015, the Criminal Code has been updated as well, decriminalizing abortions up to 10 weeks. However, it has adopted a very patriarchal approach, and demands from married women to have the consent of the husband before getting an abortion.

In both sides of the divide, the right to abortion is highly privatised. In the south, the public hospitals are not performing abortions on demand, and many doctors and nurses deny to perform them, while the General Health System (GESY) does not cover the cost of women that are forced to do it in the private sector. In the northern part of the island, women appeal to the private sector, even if its significantly more expensive, as it can provide the secrecy necessary to perform an act that is considered generally a taboo by society.

My body My Choice! My body, My right! free, safe, on demand abortion is a healthcare right! Photos from the protest of…

So, on all of the island the right to abortion has been legalised, but has not been guaranteed as a healthcare right and there is no provision of free, safe abortions.

In the public sphere, abortions, contraception and sex are not discussed. When they are, the conservative discourse of religion and the far right dominate.

In the south, the Orthodox Church organised a public discussion against abortions in 2016, when they were not even decriminalised yet. In 2018, conservative women’s groups, the “Women for Life” association, organized a “pro-life” seminar on the same day that abortion was decriminalized!

In the north, when the debate was heated up in the parliament, conservative politicians didn’t hesitate to bring pictures of fetuses to make their point that “abortion is murder”.

Activists’ mobilization on social media on the demonstration outside the US Embassy and the Department of Health in the south, prompted politicians and women’s rights NGOs to pledge to work to provide free and safe abortions through GESY. Certainly, this is a step forward, but what is clear is that if there is no pressure from society and the women’s movement, this effort will not come to fruition.

As Μαχητικές κι Ελεύθερες / Özgür ve Asi / Unchained and Rebel women of Cyprus, we believe that the mobilization of the July 8th was just the beginning. We need to organise and continue our struggle to establish the right of abortion as a healthcare and a human right. The conservative voices that usually monopolize the debate will appear again, and we will have to face them. Therefore, in this struggle we will need all those who support the right of women to their bodies, to fight this battle with us, in order not to let sexism and misogyny dominate over society.