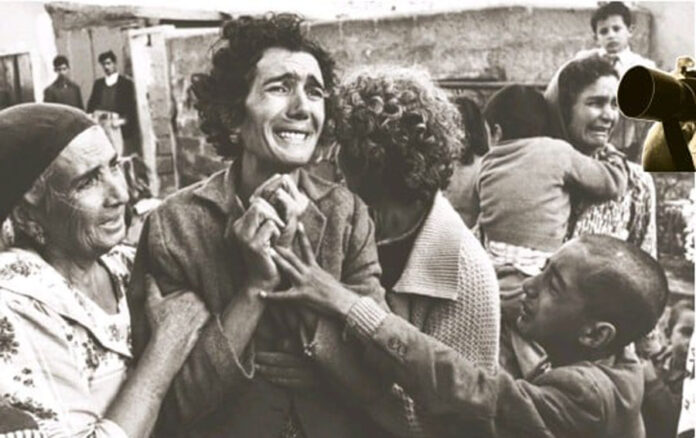 The events around December 1963, as well as those of July 1974, are the most important ones in modern Cypriot history.

On December 21, 1963, a police patrol attempted to search a car in which Turkish Cypriots were riding at the borders of the Greek Cypriot (g/c) and Turkish Cypriot (t/c) quarters of the old city. The t/c refused to be investigated, following the instructions of T.M.T.[1] and the episode developed into a fight between the t/c crowd that started to gather at the scene of the incident and the Greek Cypriot (g/c) police, resulting in the death of two t/c. This was the spark for a long-expected explosion. The incidents continued during the next day, as a crowd of t/c, many of them armed, began to roam the streets of the old city. In the afternoon, the clashes spread to other districts of the capital. By the next morning the violent incidents had spread to Larnaca. Despite initial optimism for an easing of the crisis, clashes flared up in Nicosia the next morning, when g/c families living in the strategic suburb of Omorfita, inhabited mainly by t/c, were heavily attacked by t/c armed groups. Shortly after, the clashes spread to Famagusta. Clashes were also reported in Kyrenia.

The situation led to a dangerous escalation with the entry into the battles of KTKA (Turkish Force of Cyprus) and ELDYK (Hellenic Force of Cyprus).[2] On December 26, 1963, the Greek Cypriot side handed over to the Red Cross 800 Turkish Cypriot women and children, who had moved away from the area of the battles, mainly in the Omorfita area. At the same time, the Turkish Cypriot side surrendered 26 Greek Cypriots.

Reasons behind the events

How did we get from a seemingly small incident to a generalized conflict and the division of Nicosia?

The answer is that the signing of the London-Zurich Agreements that gave independence to Cyprus was seen by the two national ruling classes, the g/c and the t/c, as an intermediate station to advance their declared goals of Union with Greece and partition of Cyprus respectively. Through the Zurich Agreements, the g/c ruling class saw the possibility, after the British left, to impose themselves militarily and economically on their weaker t/c competitors, and to proceed to the Union with Greece after denouncing the agreements. At the same time, the t/c ruling class ensured exclusivity in the supremacy in its “community” and the exploitation of the t/c, while it also acquired the legal right of intervention of Turkey (one of the three guarantor powers), which they used in ’74 to complete the partition.

This effort was also expressed through plans such as the Akritas Plan, of which Makarios was aware. This planned the way towards Union. There was also a corresponding plan for the partition that was found in the office of Kucuk, the vice president of the Republic of Cyprus at the time.

In the two years of operation of the Zurich Constitution, nothing worked according to it. The t/c leadership was asking for the implementation of the 30% t/c ratio in the public service and the g/c leadership was obstructing it. The same was the case with the separate municipalities in the urban areas. As far as the laws were concerned, the t/c did not vote on the taxation laws, Makarios called for the collection of taxes despite the fact that they were not voted upon and Denktas called the t/c not to pay the taxes.

On November 30, 1963, Archbishop Makarios proposed amendments to the Constitution (the infamous “Thirteen Points”), which concerned the distribution of powers between the g/c and t/c community and would make it, from the g/c point of view, more functional and effective. The amendments proposed by Makarios, among other things, removed the right of veto from the president and vice-president and changed the system of separate majorities, limiting the privileges of the t/c community to guaranteed minority rights.

The t/c leadership then responded by supplying the t/c with weapons and the g/c leadership retaliated with checks by police patrols.

It is against this background that the episode mentioned in the beginning of the article triggered a wider conflict.

On December 30, 1963, the first cease-fire agreement was signed. With the same agreement, the “Green Line” was drawn along the center of Nicosia to separate the northern from the southern suburbs. The British soldiers from the British bases intervened between the warring camps as a peacekeeping force. In this way, the Zurich Constitution was collapsing and the separation was starting through a series of national conflicts. This series ended in the summer of 1974 with the coup organised by the Greek Junta and the g/c far right (EOKA B)[3], the invasion of the Turkish army and the actual division on the ground. Throughout this process, the two communities paid a very heavy price, with massacres, human tragedies, displacement and disasters. The t/c community paid much more heavily for the conflicts of 1963 and therefore counts the beginning of the Cyprus Problem since then.

All these human sacrifices were made on the altar of serving the conflicting interests of the ruling classes.

Fifty-one years after December 1963, it turns out that these interests created the problem and maintained it, while today, through the explorations for hydrocarbons in the Eastern Mediterranean, the same interests threaten with a new conflict.

The only force that could stand in the way of this course of events was the Left, relying on the common interests of the g/c and t/c workers, expressing them through a common front and common mass struggles against colonialism and for peace, prosperity and growth for both communities. However, the adoption of the slogan for “Union” with Greece in 1949 by AKEL (Progressive Party of Working People), its support of the demand for Union with Greece in the referendum of 1950, and the submission of the Left to the ruling class put an end to this possibility. Characteristic of the submission of the leadership of AKEL to the choices of the bourgeois and the nationalists is the front page of its Haravgi newspaper at the time about the events of December, where it talks about “mutiny” and “Turkish rebels”.

The adoption from the Left of an independent policy on the Cypriot conflict, which will be based on the common interests of the g/c and t/c workers for peaceful coexistence and prosperity could lead to a different outcome. The coordination of the struggle for a substantial settlement of the Cypriot conflict alongside the fight against nationalism, austerity and capitalism in the north and the south is urgent today as never before. This policy is the only one that will lay the groundwork for replacing a course towards division with a course towards cooperation and reunification, towards a federal socialist Cyprus.

[2] ELDYK and KTKA were formed on November 20, 1959, after the Zürich and London Agreements established the independence of Cyprus. Per the subsequent Treaty of Guarantee, Greece, along with Turkey and the United Kingdom, would be the new state’s guarantor powers. To that end, the permanent presence of small military detachments from both Greece and Turkey was authorized according to the Treaty of Alliance, in addition to the British military presence in the Sovereign Base Areas.

[3] EOKA – National Organisation of Cypriot Fighters was a Greek Cypriot nationalist paramilitary organisation that fought a campaign for the end of British rule in Cyprus, and for the eventual union with Greece. EOKA-B was re- establised in 1971 with a more far right nationalist ideology and criminal practice (they were involved in massacres of Turkish-cypriots, abductions and were planning to overthrow President Makarios) and the ultimate goal of achieving the Enosis (union) of Cyprus with Greece. Their members participated in the coup against Makarios in 1974, while it was formally dismantled in 1978.