Australia: Who is Anthony Albanese? 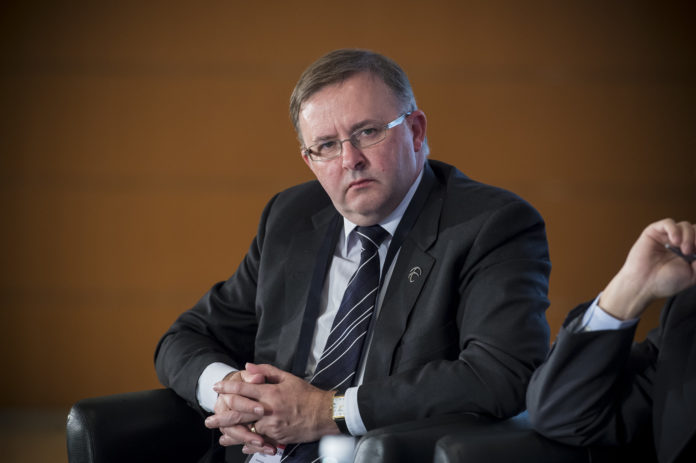 While getting rid of the Morrison government is obviously something to celebrate, it’s important to know what to expect from a Labor government. Below we share an article that was written following the 2019 federal election

Given Albanese is from Labor’s New South Wales ‘left’ faction, some hope that the party will now shift to the left. Unfortunately, this won’t be the case. Albanese is a career politician and has no plans for progressive change.

Born in Camperdown, Sydney in 1963, Albanese spent two years working at a bank before attending Sydney University to study economics. He joined Labor at university and participated in student politics. After graduating he went to work as a staffer for federal MP Tom Uren.

In 1989 Albanese became a party machine man as NSW Labor’s assistant general secretary. He held that position until 1995 when he became a senior adviser to NSW premier Bob Carr. At the 1996 federal election Albanese won the seat of Grayndler in Sydney’s inner-west and he has held it ever since.

Albanese was a senior cabinet minister in the Rudd-Gillard-Rudd government, the most right-wing Labor government in Australia’s history. He was leader of the government in the lower house, the key negotiator for the passage of bills with cross-bench MPs while in minority government. During Kevin Rudd’s second prime ministership Albanese became deputy prime minister.

It was then that Labor declared that no refugees who arrived by boat would ever be settled in Australia. The Manus Island detention centre was reopened. This gave rise to the Coalition’s secretive, illegal and torturous anti-refugee regime under Scott Morrison and Peter Dutton.

Huge cuts to education funding and sole parent welfare were made with Albanese in cabinet. The National Disability Insurance Scheme and the Gonski education ‘reforms’ were implemented. But far from reforming anything these policies have only further marketised and privatised these services.

Albanese has worked to build himself a popular profile. He presents as a DJ and music lover, and has even hosted Rage. But behind the facade he is no different to other right-wing machine politicians.

Even his working-class roots as the son of a sole mother raised in public housing are a long way in the past. Today he is far more swayed by the lurks and perks of public office, with a salary in the hundreds of thousands of dollars a year, plus expenses and allowances to boot!

At the 2016 election Albanese was threatened with losing his seat to Jim Casey, a Greens candidate and former leader of the firefighter’s union. Casey said he was an anti-capitalist.

The right-wing Daily Telegraph ran a successful front-page campaign to “Save our Albo”. The Murdoch-owned press clearly see Albanese as an important and trusted guard of Australian capitalism against any left challenge.

Albanese won the leadership of Labor without a ballot. In the formal process he was unopposed. In reality there were several other contenders who Albanese and factional power brokers worked to eliminate behind closed doors.

Labor’s power brokers wanted to avoid a public vote of party members and keep the decision among themselves. By preventing a public leadership campaign, Labor MPs evaded pressure on policy questions. So much for any democratic pretences in the Labor Party!

They didn’t want any reflection of the mass left pressure currently felt by British Labour or the American Democrats. In Britain, Jeremy Corbyn won the leadership of Labour with a list of left-wing reform policies that were popular with young and working-class people. In the US, Bernie Sanders has shaken up mainstream politics by calling for a political revolution against the billionaire class.

Far from emulating the approach of Sanders or Corbyn, Albanese is actually taking Labor further to the right. Many of the party’s election policies have been dumped, including the very limited program of ending tax dodges for the rich like negative gearing.

Attempting to appease big-business interests by acting as a loyal opposition leader is part of Albanese’s strategy to slide into power at the next election. He hopes to take over as captain if the Morrison government is ship-wrecked by an economic storm.

But if he ever does come to power Albanese will quickly be exposed and disappoint anyone who still has illusions in him.

Albanese and Labor are unable and unwilling to chart a course to a better future for us. To do that we need to build a new left-wing party based on genuinely progressive socialist policies and genuine working class fighters that money can’t buy.