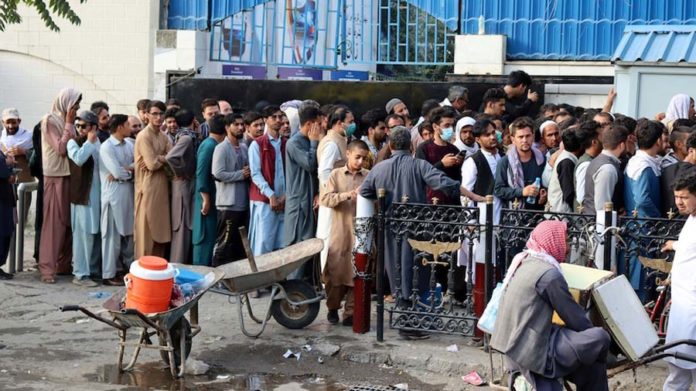 Four months ago, Afghanistan was in the news as the second country where the US got kicked out, after Vietnam.

Now the country is again making the headlines because of the devastating crisis it faces. Afghan capitalism is in a real free fall. This in not only because of the 40 years of war and destruction it has been through. It is also due to the climate crisis. This year’s drought, the second in four years, destroyed 40% of agricultural production! (UN World Food Programme WFP data)

A UN report estimates that total economic production will shrink by 20%-30% by the end of 2022 and considers this decrease “shockingly rapid” by economic standards – even compared to Syria, where a similar contraction unfolded over five years!

Asia’s poorest country is also heading for another sharp decline: the annual per capita income will fall to 350 dollars, from 500 in 2020, which is less than one dollar a day!

According to estimates, there is no doubt that if this situation persists, a big number of Afghan people will be driven to death because of starvation; this number will be considerably bigger than the 167,000 Afghans who died during 20 years of war and American occupation!

“Solidarity”… sanctions for the Afghan people

Until August, the Afghan economy was dependent on the international financial aid of American imperialism and its allies -the IMF and the World Bank- thus fostering the myth of their alleged humanitarian intervention. 75-80% of the expenditure of Afghanistan’s annual state budgets originated from these funds.

After the return of the Taliban, the infamous wolf pack of the West (led by the US) imposed economic sanctions, under the pretext of… “solidarity” with the Afghan people, and with the purpose of weakening the new regime.

In any case, however, economic sanctions have little or no impact on regimes, they only end up punishing societies.

One aspect of these sanctions is the freezing of the Afghan foreign exchange reserves which amount to $10 billion and are held in international banks. In practice, even the slightest possibility of importing basic necessities (food, medicine, etc.) has been practically ruled out, since there is no foreign currency to pay for them.

The above figures affect everyday life in the following ways:

According to official data, 20 million Afghans are currently malnourished (that is, they fail to receive an adequate amount of food every day). Based on the above facts and figures, the UN is making a nightmarish prediction: that should immediate action fail to come, this number will grow to 22.8 million by the beginning of spring (the population of the country is 38.9 million)!

3.2 million children under the age of five are already suffering from acute malnutrition and many are hospitalised. But even this is in vain, as 1 million will die without the necessary specialised treatment, of which there is a shortage too!

As a result of this, opium production in Afghanistan has been increasing. Turning to opium cultivation is the only source of income for many farmers, but also for many unemployed people from the cities who are seeking refuge by returning to their villages.

According to the United Nations Office on Drugs and Crime (UNODC), Afghan opium’s turnover in 2021 was between 1.8 and 2.7 billion dollars. This figure represents 10% of the Afghan economy. While the country produces 90% of the world’s heroin, it is also the largest producer of hash worldwide!

Similarly, the number of opium users within the country is increasing – a sign of utter desperation. The numbers are staggering: 2 to 2.5 million Afghans are on drugs!

Famine and a possible economic collapse in Afghanistan would cause a chain effect throughout the region due to the resulting refugee flows.

The first countries to be affected by massive refugee flows would be Pakistan and Iran. These countries are already hosting 1.4 million and 800,000 Afghan refugees respectively. Immediately after them, comes Turkey which currently hosts 116,000 Afghans and is the main gateway to the EU.

This is why the neighbouring countries are pushing on two fronts. On the one hand, they push for a quick unfreezing of international aid and plan steps to reach an understanding with the Taliban. On the other hand, they would like to secure an agreement with the EU – similar to the one the EU made with Turkey in 2017. In this way, they would do this undesirable job, but would be paid a significant amount of money for doing so. The issue does not only touch on finance though. The economic strangulation of Afghanistan would cause a tsunami of political instability, and this would possibly result in the strengthening of the Islamic State (ISIS) branch in Afghanistan, which is currently the only visible opposition to the Taliban. Their like-minded counterparts in neighbouring countries would be naturally strengthened too by such a development.

The most farsighted capitalists in the region, and internationally, understand that coming to some kind of agreement with the Taliban could be beneficial, at least in terms of avoiding three extremely negative prospects for themselves:

The Taliban regime, on the other hand, needs to find some foreign backing in order to stabilise itself. Inside the country, it did not have much difficulty in finding support among some of the old partners of the US and their allies.

But this is not enough. They can no longer use the propaganda of the “necessary sacrifices” needed to win the war against the US.

They need to find ways to restart the economy, and everything indicates that they will do so on the worst possible terms for the workers, peasants and popular layers of the country.

China was the first to rush to fill the gap after the US withdrawal from Afghanistan, not motivated by mercy of course, but by being a new predator.

Afghanistan’s subsoil is calculated to be rich in raw materials and rare earth minerals, necessary for the new technology production. These have not been mined so far because of the war. Western experts estimate their value to be close to 3 trillion dollars! Afghanistan’s lithium reserves in particular are equivalent to Bolivia’s, the largest known reserves in the world so far. On the other hand, southeast of Kabul, in Mes Ainak, lies the largest copper deposit in the world. These are raw materials necessary for producing batteries for electric vehicles, “smart” mobile phones, computers, etc.

If anything has been proven by now from Afghanistan’s modern history, it is that neither imperialist interventions, nor local capitalists, nor the different versions of Islamic fundamentalism can guarantee the life and prosperity for ordinary Afghans.

The protests against the Taliban regime are small in numbers but big in heroism. As such, they are indicative of possible developments in the future. A few hundred women have come out in protests for their rights, despite fears of a clampdown. A few hundreds of youth took to the streets in several cities in protests on the anniversary of independence from the British colonialists.

The working class of 8.5 million Afghans has not yet got into motion, they keep on struggling in order not to starve to death. There is no other way but to fight independently if they are to achieve a life of dignity.

In order for Afghanistan to be drawn out of barbarism, it will take the youngest workers to come to the fore as an independent force and work out their class, internationalist, socialist and revolutionary program from scratch. Build unions from scratch, build a left force suitable for their needs from scratch, so as to build a whole society from scratch.