A 2014 article on Ukrainian oligarchs and their role 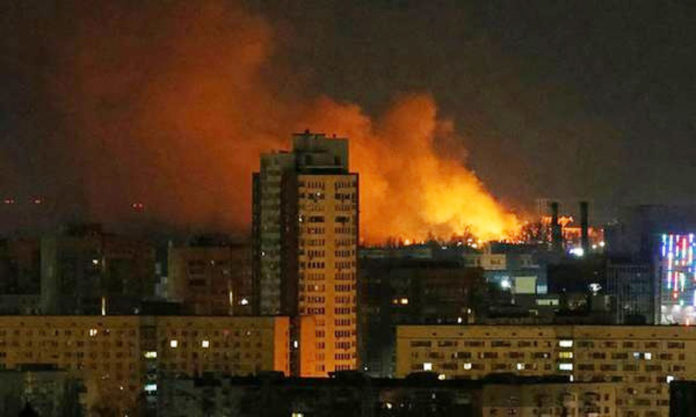 The following article was first published in February 2014. Other than the obvious shortcoming of having being written during the unfolding of historic events in Ukraine, it is based on information from merely one contact inside the country (who recently had to flee to a neighbouring country because of the Russian invasion). At the time inter-imperialist rivalries – specifically the competition between the US and the EU – were prominent and are therefore one of the subjects of the article; rather than Russia’s weak imperialism that was being side-lined.

Unfortunately, due to the historical crisis of the revolutionary leadership of the proletariat, the demands posed at the end of the article remain unfulfilled and cannot be practically implemented at the moment. This, nevertheless, does not diminish them as matters of principle for all revolutionary Marxists who see the present situation as a very obvious and painful manifestation of our crisis. It is a challenge we have to overcome in order to build a new revolutionary international like the Comintern.

The huge gap between our revolutionary principles and concrete practical tactics that our working-class contacts can test in their daily struggles is tangible and very agonising. To bridge this gap, we must reformulate those principles, recognising that starting from the very low level of revolutionary and even class consciousness of the proletariat in most countries, and our own long-running weakness and lack of roots inside the working class, we are bound to make mistakes both on the side of being too far ahead and even a few steps behind the working-class masses and particularly the vanguard. The status quo, however, is clear: watching from afar the slaughtering of our class by one or another imperialist bloc and the strengthening of right wing and fascistic forces.

The Ukraine war – and how the imperialists, whether of the US-NATO ‘democratic’ or Russian autocratic type, have turned Ukraine into a cockpit for expanding their power and maximising the profits of their capitalists – has yet again exposed the most fundamental weakness in the international workers’ movement. We must redouble our efforts to break the current balance of class forces and our own isolation – even though we may at times be accused of being ‘unrealistic’ or ‘idealistic’.

Ukraine: Billionaire ‘oligarchs’ switch to the winning side!

Arseniy Yatsenyuk of the Fatherland party has just been announced as the head of an interim cabinet. An ally of Yulia Tymoshenko, the former premier who was recently released after spending three years in jail, Yatsenyuk warned that “extremely unpopular steps” were going to be taken in order to avert Ukraine defaulting on its debt!

Parliament is to vote tomorrow on whether to approve the proposed “national unity government” cabinet that will also include three ministries from Oleh Tyahnybok’s fascistic and anti-Semitic Svoboda (Freedom) party! Tyahnybok was expelled from parliament in 2004 for proclaiming that a “Muscovite-Jewish mafia” controlled the country.

For now, Vitaly Klitschko’s party, the Ukrainian Democratic Alliance for Reform (UDAR), which has been supported by Angela Merkel’s Christian Democratic Union (CDU) and the European People’s Party (EPP) in the European Parliament, has not been offered any cabinet seats. So for the next three to four months Tymoshenko’s allies are set to hold the positions of acting president, premier and central bank chief!

Just 45 minutes after Viktor Yanukovych signed a deal with the opposition leaders and the foreign ministers of Germany, France and Poland, with a representative from Russia looking on, he had fled Kyiv (Kiev) and the repressive forces his regime commanded had abandoned their positions at all state and other official buildings. The reason for how his regime collapsed so quickly and unexpectedly was that key billionaire backers – the so-called ‘oligarchs’ – like Rinat Akhmetov, had switched sides and were now backing the opposition.

So even though Yanukovych had already bowed to many demands of the opposition but by that point supporters like Rinat Akhmetov, Ukraine’s richest man who has an estimated fortune of $15.4bn, had had enough. Akhmetov and his like want ‘peace and stability’ for their capital accumulation and show no loyalty to any particular gang of politicians or functionaries.

After its people voted for independence in 1991 Ukraine went through an especially brutal path to capitalist restoration. For example, in 1993 Ukraine’s inflation was 4735 per cent, more than five times that of Russia at 896 per cent. The economy contracted annually between 9.7 and 22.7 per cent in 1991-1996. As a result, the population dropped from 52 million to today’s 46 million – and even now 24.1 per cent of the population are living below the poverty line.

Although the unemployment figure has improved recently, and now stands at 7.6 per cent, the workers know from the era of the Soviet collapse, the struggles in the mid-1990s (including for unpaid wages) and then the ‘Orange Revolution’ of 2004, that all these big historic shifts have mainly brought to power different groups of bourgeois politicians. Ukraine needs around $35 billion financial aid over the next two years and already the EU, IMF and all other imperialist organisations and powers have said this will come after more neo-liberal ‘reforms’.

Although nearly every news item about Ukraine contains some mention of the rivalry between Russia and ‘the west’, it is more important to note the inter-imperialist rivalries between German-EU imperialism and US imperialism. In January, U.S. Assistant Secretary of State Victoria Nuland expressed support for Arseniy Yatsenyuk in a phone conversation with the U.S. ambassador to Ukraine that was leaked. Her criticism of the European Union included the following: “That would be great I think to help glue this thing and have the UN glue it and you know, fuck the EU.” She also said that “I think Yats [meaning Arseniy Yatsenyuk] is the guy who’s got the economic experience, the governing experience.”

Although this does not represent a big rift between the imperialists, it is a phenomenon that has been appearing more frequently after the end of the Cold War. For now, the US favourite seems to have the upper hand and the German-groomed Klitschko would have to wait for either the presidential election on May 25 or the parliamentary election in four months’ time. We shall have to see whose “guy” gets the big prize!

The current upheaval in Ukraine has already cost over 100 lives and many more injured. What makes it even more tragic is that the working class has not had an independent and organised presence in this movement. In fact, it has been the fascistic and anti-Semitic Svoboda party, and even more right-wing organisations like Dmitri Yarosh’s neo-Nazi Pravy Sektor (Right Sector), who have been fighting the riot police and the other armed forces of the state.

It is obvious that the interests of Ukrainian workers cannot be served by the Yanukovych bloc, the Tymoshenko bloc or any other bourgeois bloc. Nor is any EU-US-IMF-EBRD bailout in any way a positive alternative to Russia’s $15bn offer. The so-called ‘reforms’ that the EU had as conditions for signing the agreement with Yanukovych are the same sort of neo-liberal cuts that the IMF will demand in exchange for any bailout. There will be more of the sort of devastating cuts that Ukrainian and other ex-Soviet workers experienced in the 1990s – and the workers of countries like Greece are living through right now!

Workers in Ukraine, regardless of their first language or religion, regardless of whether they live near the EU or the Russian border, should unite against their class enemies – both Ukrainian and from the ‘international community’. For a start workers could demand the following: