Solidarity with the Malamatina winery workers’ indefinite strike at Thessaloniki! 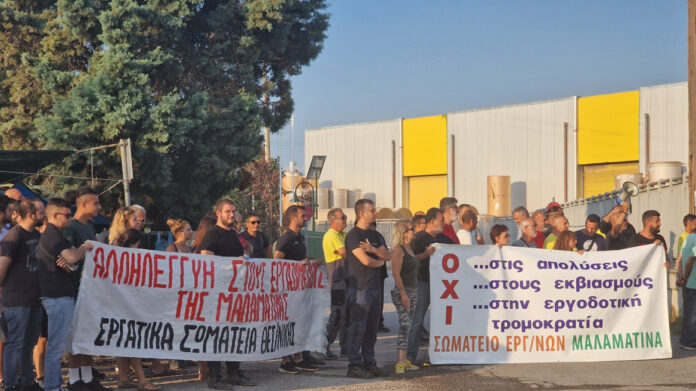 Since the end of July, the workers at the Malamatina winery in Kalochori, West Thessaloniki, have been on an indefinite strike. They have occupied the gate of the factory and refuse to back down until their demands are met. The reason that provoked the strike was the barrage of layoffs that the employers have unleashed, in conjunction with the demand to sign a Collective Agreement.

The dispute started at the end of February, when the previous Collective Agreement expired. The next turning point was at the end of May, when the 3-month extension period also expired. During these 3 months, a bargaining for the signing of a new collective agreement took place. As the workers point out, it became clear that the target of the company was to lead to a breaking down of the talks so no new collective agreement would be signed.

The company’s ultimate goal was to implement a “voluntary” redundancy plan and the signing of individual employment contracts.

In this context, at the end of May it made the first 5 layoffs of new employees who had been working for 5 to 10 months. The new workers were paid with the minimum wage, while older workers were paid in accordance with the previous company collective agreement, which guaranteed additional rights. As the union stated at the time, the employer’s move was intended to intimidate workers, with the ultimate aim of completely wiping out their collectively won rights.

From the “rescue plan” to profitability

During the five years between 2015 and 2019, the company reported operating losses. This resulted in a “rescue plan” to avoid bankruptcy. According to the Malamatina Employees’ Union, this included:

As the workers point out, over the past years there has been constant mismanagement in the company, failure to use the loans to invest in production, etc. As part of the “rescue plan”, the union had also agreed to sign a collective agreement which provided for a 20 % cut in salaries, in order to avoid bankruptcy.

According to the President of the Workers Union, G. Fragidis, today the company is profitable, with a turnover of EUR 11 million and total expenses of EUR 10 million. In fact, the new owner is the Mantis Group, a group of companies that is constantly expanding by making new investments in the alcoholic beverage market (it recently signed exclusive partnerships with French and Mexican companies for 9 products). It is important to note that Mantis Group is owned by businessmen that belong to the family of Kostas Skrekas, the Energy Minister in the government of New Democracy.

Once again, we see how the “invisible hand of the market” works. When a company is on the verge of collapse, the state (with the taxpayer’s money) agrees to forgive the vast majority of its debts. Even the workers agreed to help the company avoid collapse by agreeing to wage cuts. But when profits are secured again, the company proceeded to attack the workforce in order to maximize its profitability.

Indeed, as the Union points out, the “rescue plan” provided for the preservation of jobs and working conditions. But the new bosses are taking advantage of the new Hatzidakis labour law to impose individual contracts. And those who oppose this are fired.

Workers do not give up

The second phase started at the end of July. The employers announced new layoffs (bringing the total number of sacked workers to 15, out of a total workforce of 86), pushing even harder for individual contracts. All of the sacked workers were members of the Union. At the same time, it plans to close parts of production, with a view to outsourcing them to external contractors.

It is clear that the owners of Malamatina are trying to intimidate the workers and crush their union by bringing in contractors who will not be employed directly by the company, further deregulating labour relations.

The struggle of the Malamatina workers should and does receive waves of solidarity by workers nationally. A big number of trade unions, left organisations, social movements, ect, have expressed their solidarity both politically and practically, sending food and other supplies to the workers camped at the gate of the factory.

Xekinima comrades have been present outside the factory gates and have supported the struggle in any way they can.

Militant trade unions and trade union factions, radical local alliances, social movements, parties and organisations of the Left must coordinate and actively support this battle. With campaigns of support in workplaces, interventions in the neighbourhoods of Thessaloniki and joint militant initiatives, the issue can be opened up in the local communities, seeking the widest possible social support for the demands of the workers, which is crucial for the outcome of the struggle. A victory in the struggle of the workers in Malamatina will be a victory for all of us.