Report from the Mayday demonstration in Romania (photos) 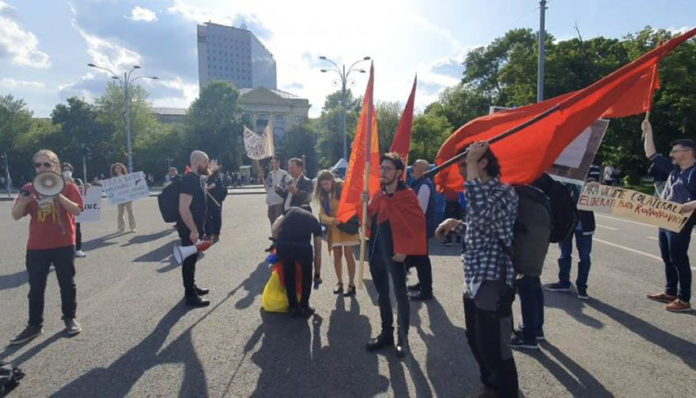 On the 1st of May 2022, in Bucharest, the Union of Socialist Youth held its congress, followed by a May Day march. We marched, socialists, leftists, marxists, communists from UTS (Union of Socialist Youth), the Romanian Socialist Party (PSR), The Syndicate of Militant Students (SESM), The Marxist Youth Bloc (BTM), Fridays for Future Romania (FFF-RO) but also members of other socialist and communist organisations, from the University Square to Victory Square in front of the government. The chanted slogans were the following –

The activist speeches have referred to the circular economy of war in capitalism, the artificial scarcity generated by capitalism, the precarious situation in which the worldwide proletariat is facing, the revolutionary origins of the 1st of May celebration (The Chicago affair, in 1886,where workers died for the 8 hour work day) and the ulterior attempt to separate it from its political core, the ridiculous discrepancies in our society (10% of the world population owns 77% of all wealth), the amplification of the climate crisis by the capitalist system, the lack of democracy in the workplace, etc.

We thank all our sister organizations for sending solidarity messages for our congress and our May Day march! There is a socialist movement in Romania that will only grow.