No pasaran! – in Liège too! 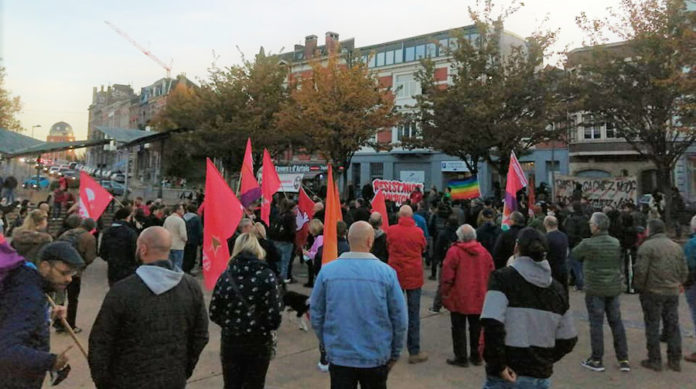 The city of Liege has been chosen by Gregory Van den Bruel and Jérôme Munier to host a public meeting of their new far-right initiative. However, it seems their decision did not succeed in serving their purposes.

These two political figures have clear far-right origins. Jérôme Munier comes from the ‘patriotic’ Parti Populaire (People’s Party) and played a key role for its dissolution. He had orchestrated intrigues and internal disputes against the former PP president, Michaël Modrikamen, whom he considered not to be patriotic enough. Gregory Van den Bruel was also a PP member and editor-in-chief of the party’s newspaper. The two of them actually worked together to overthrow Modrikamen and eventually succeeded in dismantling the PP.

They then took the initiative to create a new formation. The first meetings of its members were held in a café in Namur, called Chez nous (“at home”), which inspired the name of the new party. According to Munier, the name suggests that everyone can express themselves as they feel, “as at home”, but

“…it doesn’t bother him if some people make the connection with patriotic ideas, implying the homeland as their home, their villages and the environment that belongs to them”.

However “liberal” and “attractive” these completely empty words might sound, the published programme of the party (which intends to run in the next federal elections in 2024) leaves no doubt about the real ideology that the founders of “at home” endorse:

These are just a few of the topics included in the “Chez nous” election manifesto.

Similarly, the names of the prominent guests at the Liège meeting, which was initially  scheduled for 27 October, left no room for doubt. One was Tom Van Grieken, leader of the Flemish neofascist Vlaams Belang, and the other was Jordan Bardella, French MEP for the Rassemblement national (“National Rally”, Marine Le Pen’s party) and interim chairman of the party during Le Pen’s presidential campaign. Α nice company indeed…

But they underestimated the Liégeois!

The anti-fascist movement in Liège is quite strong and dynamic and has already managed to cancel a visit by Théo Franken, former Minister of Immigration, far-right, leading member of the NVA, to the city of Verviers.

The fascist rally almost coincided with the screening in Liège of the film by Angeliki Kourounis “Golden Dawn: a public affair” on 26 October, on the occasion of the screening of the film, organised by the group Grec.que.s solidaires de Belgique (Greeks in solidarity – Belgium), CADTM (Committee for the Cancellation of Third World Debt), Front Antifasciste Liège 2. 0 (Antifascist Front Liège) and other collectives, the Antifascist Front Liège, organised a public discussion with Angeliki Kourounis on 27 October, a few hours before the fascist gathering. The meeting’s subject was the connection of antifascist struggles internationally. The organisers had decided to march to block the “Chez nous” event after the end of the meeting.

This call was co-signed and actively supported by many collectives, institutions and trade unions in Wallonia. In fact, Chez nous had announced the date and time of the meeting but not the place, which they intended to release a few hours earlier.

However, under this pressure from the anti-fascist mobilisation, they finally announced that the meeting would go online, which in fact amounts to cancellation.

The anti-fascist mobilisation nevertheless took place, despite the cancellation of the fascist gathering. Over 200 people gathered and actually celebrated the victory. True to its anti-fascist traditions, Liège counts yet another small victory in the fight against fascism.

These events also show that, no matter how many institutional victories we win, the anti-fascist struggle will not end as long as the capitalist system that spreads discrimination and division in order to perpetuate exploitative relations is maintained. The anti-fascist struggle takes place every day: in the streets, in schools, in the workplaces, in the neighbourhoods, and can only be internationalist.