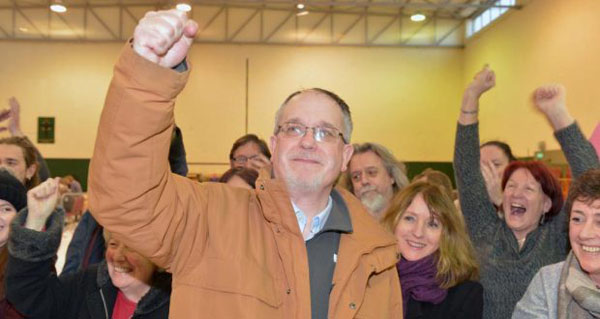 How can real change be delivered?

The election unfolded around the desire that emerged from below for “real change” and included the widespread understanding that this could only be achieved by a rejection of Fianna Fáil or Fine Gael.

Sinn Féin were the winners, receiving the biggest share of the popular vote at 24.53%, but Fianna Fáil have taken the most seats, as Sinn Féin didn’t stand enough candidates to maximise the full value of its surge in support.

A vote for real change

The votes are unprecedented, however whether “real change” will be delivered — in the sense of a transformation in the lives of ordinary working-class people, the overturning of gross economic inequality and serious measures to tackle capitalist climate change — will depend on what happens next. Will Sinn Féin (SF) use this platform to initiate a real challenge, not just to the parties of Irish capitalism, but to the system itself?

If SF (and the Greens) ruled out coalition with either Fianna Fáil and Fine Gael, it could give a huge impetus to creating an active “people power” movement of trade unionists, working-class people generally, but particularly young people, which really could change Irish society. We believe that is the course Sinn Féin and the Greens should take.

However, both parties have stated their preparedness to go into coalition with either Fianna Fáil or Fine Gael. If that was to happen, they would be responsible for casting the hopes and aspirations of the people who voted for real change last Saturday down a cul-de-sac of disappointment, as Fianna Fáil and Fine Gael’s primary role is to ensure the interests of corporations and the super-rich are protected. We also note that Sinn Féin has said it has no red lines and that all the proposals it put forward in the election are negotiable, and in power in the North, it has implemented policies detrimental to the interests of working people.

While a mood developed during the campaign for real change and reflected itself primarily in the surge in support for Sinn Féin as the biggest political force that was not part of the establishment parties, the general context of the election was difficult and significantly different to 2016.

In 2016 we were coming off the back of the mass movement against the water charges, which we had helped initiate and lead and which boosted people’s confidence. Since then people have in general stepped back from active involvement, with the exception of an active struggle on repeal (for abortion rights) for a time in 2018, making this election more difficult for those who base their political intervention on building active campaigns and involving people.

We were delighted that Mick Barry was deservedly re-elected in Cork North Central. We ran a very strong and vibrant campaign, which received a positive response and new support in many areas. Mick withstood a huge squeeze from Sinn Féin, who got 26.7% of the first preference vote (more than double its vote from 2016), to win the last seat. Mick has been a brilliant socialist voice and workers representative, and will continue to make a powerful impact and be a tribune for working-class people in the Dáil.

We were very disappointed that Ruth Coppinger missed out on being re-elected by a few hundred votes in Dublin West. This contest was one of the most competitive in the state. There was the surge to Sinn Féin, which took 28% (again double that of 2016). In addition, the Greens have had a longer term surge, going from 4% in the constituency in 2016 to more than 11% this time. In this extremely difficult context, added to by the fact that we were up against the Taoiseach (Prime Minister), it was an incredibly strong performance for Ruth to achieve 10%, but unfortunately we fell slightly short this time. Undoubtedly Ruth will continue to champion the causes of workers, women and the planet outside the Dáil as she has always done.

Our disappointment is matched by that of many in Dublin West and nationally, particularly (but in no way exclusively) of women because of the decisive role that Ruth played on all the issues affecting women. Messages are pouring in. When the possibility of Ruth losing out became apparent, one woman tweeted:

“it’s going to be a massive shame if Ruth Coppinger doesn’t retain her seat. this woman has been the face of so much change and an absolute icon to young women in politics. i hope she’s so proud of what she has achieved in her term!! I adore that woman with my entire heart and will personally riot if she doesn’t retain her seat”.

We would like to thank each and every Socialist Party member who stood for Solidarity, with very limited resources. It is not easy to be a candidate and we very much appreciate their willingness to put themselves forward. We feel it necessary to make special mention of Sandra Fay’s stance in Dublin South West, as our decision to stand in this area was unfairly criticised by some as damaging to Paul Murphy’s chances of being re-elected.

Solidarity and the Socialist Party had every right to stand in Dublin South West, where we have been standing continually in elections for nearly 25 years. We faced the defection of our TD, who had benefited from the base that the party had built up over decades as well as the hard work of many party members to get him elected, not once, but twice. We had every right to stand, and the ability to do that without materially affecting Paul Murphy’s prospects is one of the benefits of the PR-STV system.

When Sandra went out of the contest on 3,696 votes, she gave a massive transfer of over 2,400 votes — two thirds of her total — that propelled him just shy of the quota to be elected. We would hope that those who wrongly criticised our decision to stand would now recognise there was no substantive basis to their criticisms or attacks.

We would like to congratulate the other sitting TDs who stood under Solidarity-People Before Profit and were re-elected, Richard Boyd Barrett, Brid Smith, Gino Kenny and Paul Murphy and others including Joan Collins and Thomas Pringle.

Solidarity and the Socialist Party will continue to try to assist working people and young people to get organised and to fight on the issues, and at the same time fight for genuine socialist change. As we have always maintained, and due to the climate change crisis it is becoming ever clearer, democratic public ownership and planning of the key wealth and economic resources by working people is the only solution to the intractable problems of capitalist society.

Government formation — no coalition with FF or FG

Not going into coalition with Fianna Fáil or Fine Gael should not be just spoken of as a preferred option, as that implies there are circumstances where it would be okay for Sinn Féin to go into government with either of them.

We believe that Sinn Féin in particular, but the Greens too, should categorically rule out coalition with either Fianna Fáil or Fine Gael. Working people lose nothing by this, as any government that involved either Fianna Fáil or Fine Gael would be incapable of delivering the real and meaningful change people need and instead would turn out to be a disappointment. The sole purpose of these two parties is to preserve the rigged capitalist economy and state which favours the super-rich and big business.

It is appropriate to remember the profound disappointment that followed when in 1992 and again in 2011, Labour got a huge vote promising change and then brought Fianna Fáil, and more recently Fine Gael back into power. In 1992 Labour got 19.3% of the vote and 33 seats, and in 2011 19.4% and 37 seats.

Ruling out coalition does not mean there inevitably would be another general election. There are independents and parties who have a record of coalition with Fianna Fáil and Fine Gael and between them all, it seems likely they could agree some governmental arrangement.

There has been some comment about possible attempts to try to establish a government that doesn’t include Fianna Fáil or Fine Gael, but nearly everyone else. We understand why this is attractive for people, but clearly it would be difficult to achieve not least precisely because there are parties and independents who have a predisposition towards propping up Fianna Fáil and Fine Gael in power and who will want to take that course.

The Socialist Party believes it is correct to discuss with any party that desires real change and is serious about fighting for the interests of ordinary working people and the young, and we are willing to do so.

In any such discussions, including ones regarding an alternative government, we would say that there needs to be a commitment on specifics but also on general fundamental policy.

We say the state must immediately move to build 100,000 affordable homes to rent or to buy; implement a €15 minimum wage and enshrine the right of workers to be represented by the union of their choice in law; massively invest to establish proper public services and an end to all forms of privatisation that has undermined public services, particularly in health; separate church and state; argue that real unity among working people in the north and, north and south, based on our common interests as working class people is crucial and would oppose approaches or policies that would stoke up dangerous sectarian division, potential violence or any form of coercion of either community.

Crucially, to underpin real change, it’s necessary to break with the rigged capitalist economy through the democratic public control and ownership of the key wealth and economic resources. This is essential if the key problems society faces are to be tackled.

If the outline of an alternative government was brought together, we would argue that left and socialist TDs should adopt the above approach as a bottom line. If these changes aren’t agreed, such an alternative government would be at the mercy of the vested capitalist economic interests who currently control the economy and who would use their economic power to block real change. Left and socialist TDs should not endorse an approach they do not think will deliver for ordinary working people, but should continue to organise and build for a genuine left, socialist government.

Allowing a change of government

However, we wish to state very clearly, if there was a choice for the next government between such an alternative new government, that doesn’t have the involvement of Fianna Fáil or Fine Gael and a government dominated by Fianna Fáil and Fine Gael, we would advocate that left and socialist TDs vote to allow the new government come to power, while not participating in it. In that way, ordinary people will see in practice what approach and policies the new government implements, and our job will be to hold them to account on their promise of real change and proceed to organise workers, women and young people to continue the struggle for such real change. The potential to fight for change from below was illustrated in the campaign itself by the massive protest of childcare workers, the teachers strike and the ongoing anger on the pensions issue.

Regardless of exactly what happens in the weeks and months ahead, the huge rejection of Fianna Fail and Fine Gael and the desire for real change is the single most important thing to come out of this election. People voted for Sinn Féin in huge numbers, now the issue is, will Sinn Féin act in a way to really represent that desire for fundamental change or will they rescue Fianna Fáil or Fine Gael, as Labour did in 1992 and 2011.