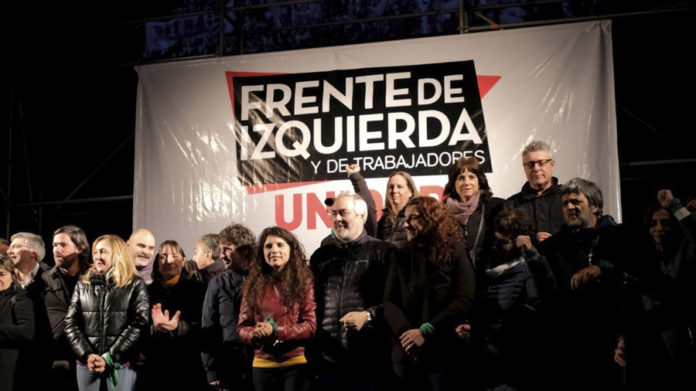 On September 12, the national primary elections took place in Argentina.

According to the country’s electoral system, participation in the vote for nominating party candidates is universal and compulsory. Through the primary elections each party’s candidates for the mid-term elections are nominated. 50% of the members of Parliament and 1/3 of the members of the Senate are elected in the mid-term elections. Parties getting less than 1.5% of the vote in the primaries are excluded from the electoral process. The President of the country is elected in a separate electoral process.

The primaries, in which the participation rate was 64.3%, are a preview and a barometer for the mid-term elections to be held on 14 November.

Collapse of the Peronists

At the same time, the centre-left governing coalition of Peronists* “Front for all” (Frente de todos) suffered a heavy defeat.

On the other hand, the right-wing opposition “Together for Change” (Juntos por el Cambio) came first, gaining 40% (8.8 million votes).

On the basis of these results, the right wing hopes to win a parliamentary majority in the November elections and return to the Presidency in 2023.

This is a fairly new party, led by Javier Millay, a television personality who follows in the footsteps of Trump and Bolsonaro and is linked to fascist forces. He also publicly expresses his sympathy for the times of the Vidella dictatorship (1976-1983) in Argentina, one of the bloodiest and most violent regimes in Latin America, which left a legacy of 30,000 missing and murdered people.

The main reason for the collapse of the centre-left and the supposedly pro-people Peronist coalition is none other than the deepening economic and social crisis, which is being experienced in a harsh way by the working class and poor.

Peronist Alberto Fernandes succeeded the right-wing Mauricio Macri in 2019. Despite the expectations he had created, he failed to improve the living standards of working people.

In the course of the last three years, Argentina’s economy has been in recession. The growth forecast for this year and next year will not even bring the economy to pre-Covid levels. Inflation is galloping at an annual rate of 45-50%, eroding people’s incomes. Poverty affects over 50% of the population and 71% of the youth, while official unemployment stands at 14%.

Continuing the repayment of the debt to the IMF (US$19 billion per year) represents a bleeding wound for the national economy. To achieve targets for debt repayment, the Peronist government has been taking neoliberal measures.

At the same time, the government has failed to deal effectively with the pandemic and the country has over 115,000 deaths from Covid-19, a figure that ranks it the 3rd worst in Latin America and 11th place worldwide, in terms of death/population ratio.

At the same time, the ruling coalition is divided and has been rocked by various scandals related to the management of the pandemic, involving the preferential vaccination of friends of the government, parties held by government officials in the midst of a harsh quarantine, etc. The most important element of course was the dashing of people’s expectations for improving living standards.

Big opportunities for the anti-capitalist Left

The eventual return of the right-wing to power in the next few years will basically be a punishment for the Peronists but will not solve any problems. Living conditions for the working-people will remain very difficult, and this will fuel polarisation, radicalisation and the development of mass movements.

These conditions open up big opportunities for the Trotskyist forces that speak in the name of overthrowing capitalism and for a socialist transformation of the society, namely the FIT-U.

In the past few years, FIT-U has managed to escape marginalization, and gain a mass electoral base that in some areas reaches well over 5%. Moreover, it seems to combine good electoral results with the building of forces within the labour and other movements (feminist, environmental, youth, etc.).

As the experience of the Alberto Fernandes government seems to overturn the illusions about the Peronists, it is quite possible that the struggles that are expected to develop against a future right-wing government will be reflected politically into a further strengthening of FIT-U. In turn, this prospect may have a significant impact on other Latin American countries, such as Brazil and Chile, where important struggles, uprisings and political processes have been developing.

Lessons for the Left internationally

But these developments also offer important lessons for the Left internationally, which in most countries is in a very difficult situation, often the worst in recent history.

The main conclusion is that there can be no pro-working class solutions within the framework defined by the capitalist economy and the international institutions of big capital (IMF, World Bank, EU, etc.). This is a well-learned lesson also in Greece through the experience of SYRIZA.

Moreover, the revolutionary Left can win mass electoral and social support without making any compromises on its political programme, on the basis of coming together on a united front basis, to break the fragmentation of the anticapitalist Left, to send a message of united struggle to the mass movements and aim to build real forces in the working class and the social movements.

* “Peronism” is a centre-left political movement named after Juan Perón who was elected President of the country three times from 1946 to 1955 and from 1973 to 1974 (when he died and was replaced by his wife Isabel). Perón had a pro-worker profile, and made significant reforms in favor of the working people (inside the framework of the system), based on the growth that characterized the international and the Argentinian economy at the time.