Canada: outrage over the more than 1,000 graves of aboriginal children 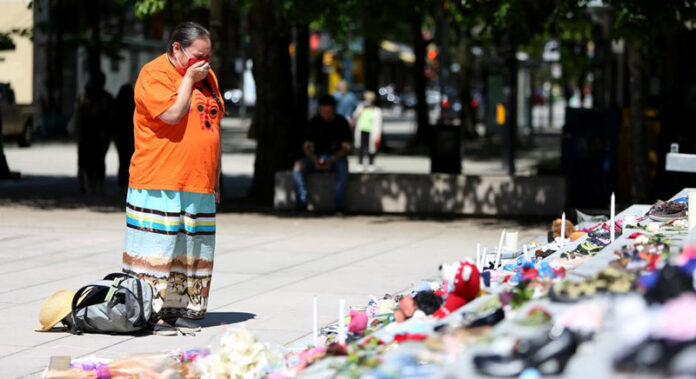 “Parents saw their children taken from their hands, taken to unknown and distant places and were never able to see them again. They were buried in unmarked graves, long forgotten and covered by vegetation. Think about it. Bear it. Imagine it.”

These are the words of Marie Wilson, one of the three members of Canada’s Truth and Reconciliation Commission which has been set out to study the history and crimes committed against Aboriginal people during the 20th century.

For over a century, more than 150,000 Aboriginal children in Canada were abducted from their parents and forced into Catholic schools as part of the government and Church’s plan to “assimilate” Aboriginal people into Canadian society. In fact, as both the Aboriginal people themselves and the Commission’s findings state, this plan was aimed at the cultural genocide of Canada’s First Peoples by the colonialists.

Inside these schools, young children were subjected to verbal, physical and sexual abuse, and it is estimated that up to 6,000 died from disease, accidents and fires and ended up buried in unmarked graves, as it was cheaper than sending them back to their parents, who never found out what happened to their children.

The Commission’s investigation’s figures are chilling: the death rate among aboriginal children in these schools was higher than among Canadian soldiers in the Second World War!

Sue Caribou, one of the children who survived the traumatic experience in a Catholic school, describes what she experienced in a vivid and chilling way:

“I was thrown under the cold shower every night, sometimes after being raped.”

“We had to stand like soldiers and sing the national anthem, otherwise we would be beaten.”

In addition, she says she was called a “dog”, forced to eat rotten vegetables and forbidden (as were all indigenous children) to speak in her native language, Kri.

Over 1,000 graves of young children in boarding schools

Late last May (2021), the wound for Canada’s indigenous people was opened up one more time; anonymous graves of 215 young children, the youngest of whom died at about 3 years old, were discovered on the grounds of a Catholic boarding school in Kamloops, a region in British Columbia.

The boarding school was founded in 1890 by the Catholic Church and operated until 1978 with official recognition by the state.

George Manuel, who survived his internment at the boarding school in the 1920s, stated that “Every Indian student smelled of hunger.”

The school was cold in the winter and unsanitary. Documents indicate that students were exposed to outbreaks of measles, tuberculosis, influenza and other contagious diseases, from which many died. A report from 1935, when a measles death occured at the boarding school, stated that 285 pupils were accommodated in five dormitories; it was obviously impossible to isolate patients and limit outbreaks during an epidemic.

The story in short goes as follows: young children were forcibly separated from their parents, confined to boarding schools where they were tortured physically and mentally, prone to disease; those who did not survive were hastily buried in graves with not even a headstone bearing their name.

But that’s not the whole story. In late June, a group of indigenous people in the Canadian province of Saskatchewan reported finding unmarked graves of some 751 people in a now-closed boarding school, with most of the remains again belonging to young children. In addition, in early July, another 182 human remains were found in anonymous graves at the site of another boarding school in British Columbia.

These recent findings have triggered new waves of anger against the state and the Catholic Church, since they remind the indigenous people of what kind of suppression and suffering they have been subjected to. Representatives of the indigenous populations argue that the abuse and trauma that they have endured for generations is a key reason for the epidemic rates of alcoholism and drug addiction across their camps.

To this day, indigenous people continue to suffer from discrimination and oppression. A 2009 survey found that Indigenous women are almost 3 times more likely to be victims of violent crime than other Canadian women. As recently as 2015 there were allegations of mandatory sterilizations of indigenous women, while they were at maternity hospitals to give birth! At the same time, indigenous populations face higher rates of poverty, while their access to health care and even drinking water is limited.

The anger took to the streets

Outrage at the living conditions of the indigenous people still today, has boiled over after the recent findings. Many Catholic churches have been burned or even vandalised in areas where Aboriginal people live. Moreover, protest rallies and marches were organized by the indigenous people on July 1, also called “Canada Day”, when the country’s independence is celebrated.

On that same day, 10 more churches were set on fire in British Columbia, while protesters threw paint on and knocked down statues of Queen Victoria and Queen Elizabeth II, these statues representing a symbol of the crimes against indigenous people by the colonialists.

Fake tears for a never-ending crime

The Canadian government officially and publicly presented their apologies to the indigenous people for the crimes at the boarding schools as early as 2008. On the other hand, the Catholic Church stubbornly refuses to do so even today, after the discovery of over 1,000 child remains and despite of this being a demand of the indigenous tribes.

The state’s “apology” though is empty words because in practice discrimination against the indigenous people is still there. After all, this is the reality, to a greater or lesser extent, for all peoples in all neo-colonial countries.

Although the leaders of the so-called “industrially developed” world shed crocodile tears now for the crimes of the past, they still continue to exploit and oppress indigenous peoples, and this shows that the barbarism is not over.

Barbarism can only end through the common struggles of the Canadian people, workers and youth. They need to align their struggle with that of the indigenous peoples and prioritise the just demands and rights of the latter. They finally need to fight together against the “root of evil”, the very capitalist system itself, which is based on inequalities, “feeds” and harvests on discrimination and only gives back crumbs and fake “apologies”. This is the only way to end discrimination and inequalities; this is the only way for the struggles of the indigenous peoples, against the crimes committed by European colonists in Canada and elsewhere, and for their rightful demands to be vindicated after so many generations.