University teachers in Nigeria call for a month-long strike action 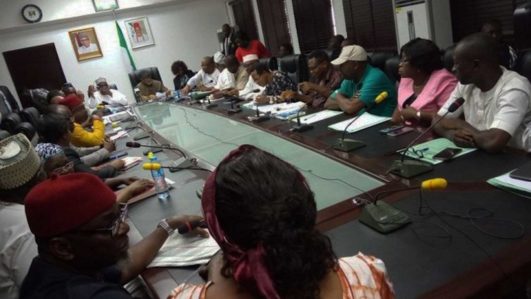 We publish below the statement by Revolutionary Socialist Movement in Nigeria in support of the university teachers strike which was announced today.

The Revolutionary Socialist Movement, RSM, fully supports the four-week strike announced by the Academic Staff Union of Universities (ASUU). This strike is coming after ASUU has given sufficient warning to the Federal Government.  ASUU was forced, once again, to embark on strike action because of the irresponsible and provocative attitude of the government.

The ASUU strikes always come after all diplomatic avenues are closed by the federal government. The ASUU grievances this time are over the failure of the Federal Government to fulfill the agreements made with the union in 2009. ASUU had earlier given the Federal Government a three-weeks ultimatum in an attempt to come to agreement and avert the strike.

ASUU commences another four-week strike and has declared its intention to continue with an indefinite strike if the federal government fails to meet their demands. According to the ASUU, this strike is because of the “government’s unfaithfulness” to implement the Memorandum of Action it signed with the union, which led the union to suspend strike action in the course of 2020.

The strike announcement was made after the union’s National Executive Council meeting at the University of Lagos, on February 13 and 14. ASUU President, Prof. Emmanuel Osodeke, addressing the press in the early hours of today, Monday February 14, explained  that despite meeting with the federal government and having given the government enough time to decide on the crucial issues related to public education, the government refused to respond in any productive and positive way.

The main demands raised by ASUU are the following:

• A drastic increase in the funding of public Universities

• The revitalisation of public universities

• Renegotiation of the 2009 ASUU-FGN agreement

RSM fully agrees and has already declared it support for the demands of the academic community because they are the only way to save public education from the continuous attacks and undermining by the government policies.

Nigerian youth and working people must fully support the demands of ASUU and reject the proposed bill by the House of Representatives sponsored by the House Speaker Femi Gbajabiamila. This bill completely ignores the level of poverty ravaging the country. What Nigerians need is quality public education funded by the state (i.e. the taxes of the Nigerian people) and democratically ran. Implementing student loans means that education will be completely commercialized and only children of the rich privileged minority will be able to afford it.

The loan to study for students has nothing to do with a better education system. The loans will be with handed out with interest so that the bankers can profiteer. In a society where the children of ordinary people can’t get a properly paid job after graduating, this will lead to mountains of debts. If student loan debt has got out of control in the United States of America, having grown massively in the last 15 years and totaling $1.73 trillion (1,730 billion US dollars) by July 2021, one can imagine what will happen to Nigerian students who come from a poor background.  This bill must be thrown to the dustbin and this is the task of not only of the academic community but of all ordinary Nigerians and particularly the youth.

Nigeria is stupendously rich in human and natural resources, but the problem is that a minute minority is enjoying these riches.

The ASUU strike, at this time, is imperative and is in the interests of all Nigerian people. The ruling class claims there are no funds, but government officials are paid jumbo salaries and the capitalists are making jumbo profits – they’re responsible for what they describe as “shortage of funds” to guaranty a functional educational system in the country because the wealth created in the country ends up in their pockets.

We call on Nigerian students and parents to support the ASUU strike in order to compel the government to meet the ASUU demands. The struggle to revitalise the education system in Nigeria should also be endorsed by the rest of the Trade Union movement of Nigeria, who should join ASUU to demand a democratically ran, public funded education.

It’s also important that ASUU should aim to join forces with genuine change-seeking Nigerians to build a mass workers party as an alternative to the present rogues in power. ASUU has been consistently fighting for a better educational system while at the same time declaring that they stand for the welfare of the ordinary Nigerian people. ASUU needs to join the struggle to build a mass based political alternative to the barbarism of ruling class.