UK: SOS NHS – A new broad formation to fight against the attacks on the health sector 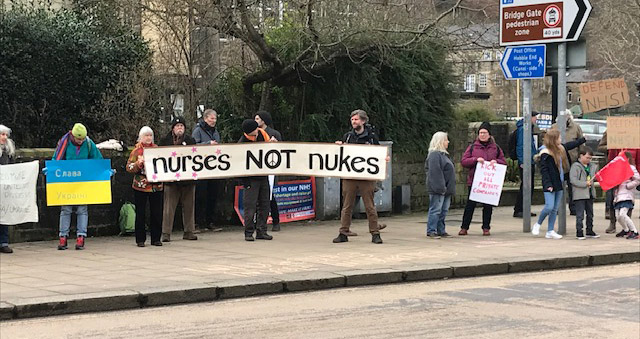 People demonstrated in defence of the National Health Service all over the UK on Saturday, February 26.

There were protests in at least 67 towns and cities and well over 100 locations. SOS NHS is the most united response to the attacks on the NHS since they started under successive Tory and Labour governments. It includes all the main campaigning groups, such as Health Campaigns Together, Keep Our NHS Public and The People’s Assembly and many others. It also includes many trades unions, including the Royal College of Midwives, UNITE, GMB, UNISON and PCS. This is a breakthrough in terms of unity in struggle and is welcome as well as over-due, in the context of decades of government underfunding and strategic diversion from the real purpose of the NHS.

The private sector is being given an increasing role in the NHS through out-sourcing operations and other medical procedures as well as using private companies extensively in hospitals for catering, cleaning, security etc. The Labour Party is almost silent on this issue although its leader Keir Starmer clearly supports the private sector playing a key role in the NHS. However, some of the groups involved in this new struggle have close links to the Labour Party and in supporting this struggle are distancing themselves from the official Labour Party policy.

The Health and Social Care Bill, which has yet to complete its passage through parliament, is the latest in a series of bills aimed at dismantling the NHS and passing the profitable pieces over to private corporations. In addition to this, National Insurance is now being used as a method of raising funds for the NHS. This is against the most important founding principle of the NHS which was for its funding to come exclusively from general taxation, leading to those most able to pay, paying the most. National Insurance is a tax that was intended to fund the state pension and other welfare benefits separate from the NHS.

One of the key demands of the newly constituted SOS NHS is to end privatisation. This does not go far enough. All existing private companies working inside the NHS should have their contracts terminated and services taken back in house. The NHS should be for the benefit of patients and not run for profit. Also, all Private Finance Initiative (PFI) contracts should be cancelled. The cost of repaying these contracts is crippling the Hospital Trusts that have utilised them.

The NHS is facing its worst crisis ever. This is a national emergency, but the government and the Labour Party are not prepared to change their course. The overwhelming majority of British people support the principle of an NHS properly funded and free to all. It’s only the ruling class that disagrees.

The demands of SOS NHS are:

These demands, although progressive don’t go far enough. They should be extended to include:

The NHS is in crisis and it is only through the united efforts of workers, trades unionists and activists that we can build a struggle and then widen that struggle across society, to save it.

PS: Due to the developments with the war in Ukraine, in many of the protests a number of anti-war slogans and placards appeared, as you can clearly see from the picture which was taken in Hebden Bridge.