Trotsky and the Cuban political crisis 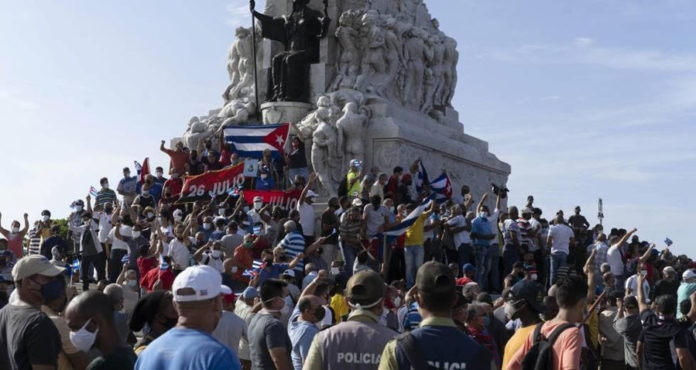 Since July, a series of mobilisations have erupted in Cuba, as a result of the prevailing social conditions and in opposition to the government’s policies. These mobilisations and their nature are the subject of debate not only inside the country but also within the international left movement. In this context, we publish the translation of an article by Frank García Hernández from the website Communistas, which expresses the views of oppositional Cuban Trotskyists. We find the information useful and are in general agreement with its analysis.

In addition to the triumph of the Bolshevik Revolution, 7 November also marks the birthday of Leon Trotsky. His analysis of the degeneration of the Soviet bureaucracy is an essential tool for understanding the political crisis in Cuba.

Similar to the Soviet bureaucracy, the Cuban government has been increasingly getting detached from the reality experienced by the working class. The most striking example of this is the very fact that the 11 July protests took place. On top of this, the way the official discourse addressed the protests, criminalising them and reducing them to supposedly serving the counter-revolution, is another sign of detachment from the reality of the working class in the country.

Even after the 11 July demonstrations, the Cuban government did not realise the urgent need for creating new mechanisms for citizen participation. The government’s way of reaching out to the working class was not to stimulate socialist democracy but just to pay visits to the working class neighbourhoods. These visits are in general organised vertically from above and announced in advance; in the end, the area where the high official will visit is only superficially refurbished, and then everything remains the same.

In a recent interview with foreign media, a high-ranking Cuban leader declared that there was neither hunger, nor unemployment, nor poverty in Cuba. There can only be two reasons for this serious break with reality. Either the bureaucracy is indeed unaware of the reality of the country, and that is indeed the most dangerous case, or they are aware of it but choose to address a triumphalist discourse, which causes discontent among broad sectors of the Cuban working class.

In December 2020, the Minister of Economy Alejandro Gil reported that the country’s GDP would grow by 6% in 2021. Contrary to this, Gil announced at one of the recent sessions of parliament, that the GDP had fallen by -13%. The same official announced in May 2021 that Cuba would receive at least 2 million tourists this year. According to Cuba’s National Office of Statistics and Information however, until September the country had not exceeded 190,000 tourists, and health restrictions for foreign visitors will only be lifted on 15 November. In three months, of which only 45 days will be free of restrictions for international travellers, Cuba will not be able to cover for the 1 million 810 000 missing tourists it needs to meet the figure announced in May by the Minister of Economy.

To this worrying scenario must be added the fact that an important sector of Cuba’s youth is becoming increasingly depoliticised, identifying socialism with the stagnant official discourse.

Young people see the contrast in the triumphalism of the Communist Party with an increasingly critical daily reality, marked by profound shortages, long queues to buy basic foodstuffs and a significant concentration of basic necessities offered in shops where payment is only possible with cards backed by foreign currency. In this way, an important sector of Cuban youth ends up rejecting Marxist ideas, falling into political apathy, and in the worst cases, turning to the right.

At the same time, this deep economic and political crisis has led to the emergence of a new, youth layer within Cuba’s critical Left. Most of them share a common denominator: they find Trotsky’s book The Revolution Betrayed, a useful analysis for understanding the Cuban crisis. Apart from the Stalinist purges, the complexities of a multi-ethnic state, and the distance in time, these young people, who publicly position themselves to the left of the Communist Party, discover how the Cuban bureaucracy reproduces dangerous traits of the Soviet bureaucracy.

This young socialist Left sees that Cuba is increasingly marked by the diversion of the Cuban bureaucracy from the reality of the majority of the people.  Several elements are typical of a socialist project that has degenerated politically: the stagnant and empty ideological discourse, the rise of young opportunists to public office, the unequal standards of living between the degenerated leaders and the working majority, as well as political double standards. The new Cuban Marxist left finds, therefore, a scenario very similar to that described by Trotsky in The Revolution Betrayed.

This November 9 marks another anniversary, that of the fall of the Berlin Wall, which heralded the demise of the so-called Eastern European Socialist camp, and the final disintegration of the Soviet Union on December 25, 1991. Thirty years ago the Soviet working class failed to defend its rights, to take the lead after the fall of the bureaucracy, into a new revolutionary process and to carry forward the construction of a truly socialist system. The hundreds of young people who crossed the Berlin Wall on 9 November 1989 did not do so in order to carry the red banner of revolution to their fellow Germans in the West, and overthrow capitalism. They did so in pursuit of a bourgeois society where they were promised high levels of consumption. At the cost of predatory financial policies – where Greece appears as the most critical case – Germany is one of the world’s leading economic powers; but if the Cuban government falls, Cuba will fall into an underdeveloped capitalist status, similar to most third world economies. In the present conditions the fall of the Cuban government would only lead to the establishment of an anti-communist regime which would follow neoliberal economic policies and bend to the political interests of the United States.  The neoliberal economic project of the Council for Democratic Transition presented as a future socialist Cuba, only shows what the fate of the Caribbean nation would be under a capitalist regime.

In the midst of an ever-worsening political crisis, it is the urgent duty of the Cuban critical Left, to act, or at least to raise awareness. Every young socialist must expand their ideas in their range of action. They should show their fellow students and colleagues that the mistakes made by the Cuban government are not inherent to the socialist project and that another socialism is possible, thus stopping the spread of political apathy, which is useful to the counter-revolution.

Trotsky is not Marx’s prophet. To see him as such is to destroy him. Trotsky’s thinking is a defining Marxist tool that we can apply in order to understand the current Cuban political crisis. The difference in lucidity between the young Cubans who have adopted his thinking and those who either represent the bureaucracy or proclaim a class-conciliatory socialism is quite clear. The political lucidity of the new Cuban Marxist left is expressed in that they assume socialism as an emancipatory project only viable if it is built in freedom, but freedom and democracy built and led by the working class. The naivety that economic and political power can be shared equally between the bourgeoisie and the working class is something that, by virtue of being Marxist, the young Cuban socialist left has banished.

This also explains the position of the new Cuban Marxist left concerning the demonstration on 15 November. It defends the right to demonstrate for those who decide to march on that day, but at the same time it refuses to march on 15 November, because it understands that it is a serious political mistake to share space with representatives of neo-liberal organisations such as the Council for Democratic Transition.

This is the big difference between Trotsky’s united front and Stalin’s popular fronts. The former grouped together progressive forces, while in the latter the communists could even ally themselves with the likes of General Fulgencio Batista.

The Cuban government has declared the 15 November demonstration illegal and even published a warning on official media that those who participate in the demonstration will be punished by law.

But sometimes some legal decisions do not bring with them the necessary political legitimacy. While the 15 November demonstrations have almost no popular support, they do carry significant political weight. To repress them would therefore be a serious political mistake and a violation of the right to peaceful protest. It is true that the Marxist left who makes criticisms of the regime should not participate in the demonstration on 15 November, but if it positions itself in favour of repression it will be making the same mistake of marching alongside the Council for Democratic Transition. This is another major difference between Stalin’s project and Trotsky’s political proposal. The former has repression at the heart of its political programme. Trotsky’s socialism is about freedom.

In these decisive times for Cuba, let us have the political lucidity and militancy to be and make two, three, many Trotskys.