The struggle to save Akbelen Forest in Turkey 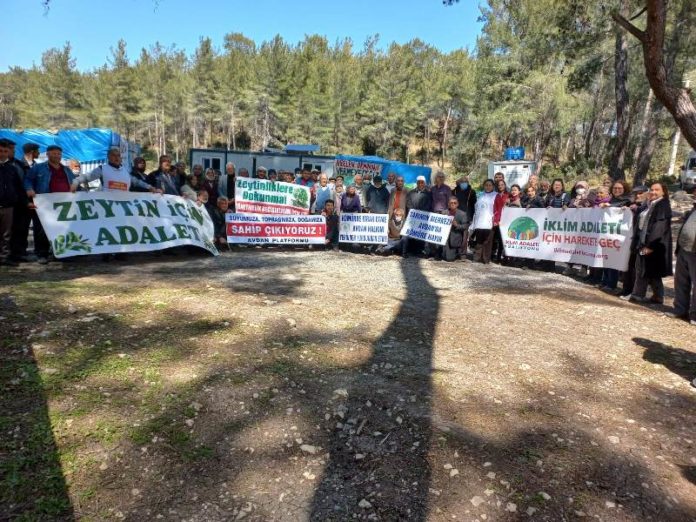 The local communities of Milas and Yatağan in Muğla province, Turkey, have been living under the destructive impacts of Yeniköy, Kemerköy, and Yatağan coal-fired power plants and lignite mines for four decades.

Now the last untouched piece of land in the area, Akbelen Forest, is under the threat of an expanding open-pit lignite mine.

The coal mine, extends uninterruptedly for 15 kilometres, gradually reaching İkizköy, the village that is close to Akbelen forest, a few years ago. The inhabitants of İkizköy initiated a struggle in order to stop the expansion of the mine some 2 years ago, along with inhabitants of other neighbouring villages.

The air pollution caused by this activity is estimated to be responsible for 45,000 premature deaths from 1982, when the first plant began operating in Yatağan, until the end of 2017. If these coal-fired power plants remain operational for the next 25 years, they are expected to cause 5,300 additional premature deaths even if the required investments are made in them in accordance with EU environmental standards.

12 villages were seriously affected in order to facilitate the expansion of the coal/lignite mines. These villages were either entirely wiped out or relocated. Thousands of people were displaced; they lost their agricultural lands and livelihoods.

According to a 2018 study by the Research Association of Rural Environment and Forestry (Turkey), open-pit lignite mining in Mugla is responsible for the destruction of more than 50 thousand decares of land along with its ecosystems. 50% of this land was forest land, and the rest of it was mainly composed of olive groves and agricultural fields.

Today the mine is at the door of İkizköy, and its inhabitants are willing to fight to stop it!

The Turkish government ratified the Paris agreement in 2021, after the destructive floods and wildfires that spread last year in the same area as the mine. Turkey was one of the 105 countries to sign a declaration to end deforestation by 2030 at the COP26 climate summit.

However the coal-fired power plants and coal mines in Muğla were privatised in 2014, and in 2020 the Ministry of Agriculture and Forestry granted a mine operation permit for the Akbelen Forest area, extending the lifespan of the mine for 25 more years, without even conducting an Environmental Impact Assessment and without of course asking the inhabitants of the area.

The Akbelen Forest which extends over 740 decares, is an old and natural red pine forest, which keeps the dust of the mine away from İkizköy village, provides clean air, water, food, and is an important breeding, foraging, and nesting habitat for a large variety of bird species including those strictly protected under international conventions.

The struggle of the people of İkizköy

The inhabitants of İkizköy have been engaged in a struggle against the expansion of the mine and to save the forest of Akbelen for two years now. They have set up a camp in the forest and declared that they will not allow anyone to destroy it. In these two years, the company that owns the mine has tried many times to evacuate the camp. A year ago, the company, who is also controlling the water resources of the area, left the village without water for days! Of course, the state machine is siding with the company, and has many times attempted to repress the movement, but has been unsuccessful.

On Friday, March 25, responding to the call of Fridays for Future for actions against the climate crisis, the organisations that participate in the campaign Μας Σκάβουν τον Λάκκο / Kazma Birak/ Don’t Dig in Greece, Cyprus and Turkey, showed their solidarity to the inhabitants of İkizköy. They sent solidarity messages from organisations and movements, collected signatures, and in Turkey organised protests of solidarity in Denizli, Izmir and Istanbul.

The movements, organisations and activists that fight for the protection of the environment, against the use of lignite/coal and generally the use of fossil fuels for the production of energy should support the struggle of the inhabitants of İkizköy.

The struggle to end climate change and the destruction of our planet, should be coordinated on an international level, that is because the environmental crisis does not know borders.