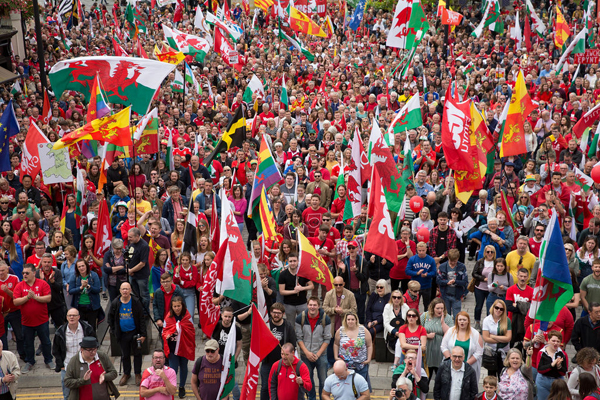 National antagonisms are on the rise in general in the epoch that we are going through. This has been the case for the past few decades but these processes intensify rather than subsid, reflecting the general and deepening crisis of capitalism and engulfing also “developed” industrially, rich countries. One of them is Britain which has been facing not only the Irish question, but in the past couple of decades the Scottish question and, more recently, the rise of “Welsh nationalism”.

The first thing to say is that, at present it is only a minority of the population who currently support independence. However, support has been rising to historically high levels, a recent opinion poll conducted by You Gov showed a third in support. In fact, 33% said they would vote for independence if a referendum were held the next day, with higher numbers stating they would support greater autonomy.

The likelihood is once the pandemic eases and/or a vaccine is rolled out, that there will be many more demonstrations particularly as there are Welsh Parliament elections next year.

The main demands have been, in my view deliberately vague. Simply slogans such as ‘Yes Cymru’ or “A fair deal for Wales” (Cymru being Welsh for Wales)

I hope you are sitting comfortably! I will try and give just a brief overview. Wales was taken over by England much earlier than either Scotland or Ireland. As a result, it is much more integrated into Britain or rather England than compared to Scotland. Just to give one significant example there is an England and Wales legal system and a separate Scottish legal system, similar examples could be given in other spheres. This explains why generally support for independence is lower, Wales is much more intertwined with England than Scotland is and without the North Sea oil which is held up as an example of how an independent Scotland could be economically viable.

That does not mean that there has always been a happy relationship, there were serious attempts by the ruling class, almost all of English descent, to wipe out the Welsh language. For example, in the past children were beaten in schools for speaking Welsh. In north Wales quarries workers would organise in the median of Welsh, much to the annoyance of the quarry owners and management, all of English origin, who could not understand a word being said!

Over the years there have been battles which are brought to the fore and highlight the rights of Welsh people to their identity and culture. In the 1960s a Welsh village was completed flooded to create a reservoir for the use of industry in the North West of England, in the 1980s there were successful campaigns for a Welsh language television channel and continuous battles in different local areas over Welsh median schools as well as many other issues.

The industrial decline in the UK throughout the 1980s had a devastating effect on South Wales in particular and this is where the majority of the Welsh population are located. As a result, wider political issues in the UK have an increasing impact on the national consciousness within Wales.

I think this is an important question, really this is the answer to the recent rise in support of independence. Since the inception of devolved government in Wales, it has always been led by Labour, either alone or in a coalition, but never by the Conservatives. Of course, in Britain we have had a Conservative government for the last decade, and that decade has been marked by huge austerity measures stemming from the last financial crash in 2008. Whilst the Conservatives at present do have many elected representatives throughout Wales, there have been times where there has not been a single conservative MP sent to London from Wales, and there would certainly be no possibility of a Conservative government of any kind being formed within Wales.

Hatred for the Conservatives and the policies they have implemented over the last decade, and the legacy of what they had done in power previously, presiding of the industrial decline of South Wales and with it, well-paying jobs, definitely plays a significant role in increased support for Welsh autonomy. Though it is not the only factor involved. Brexit has also played a large role in this, and it is no coincidence that support for Welsh independence has sky rocketed since Britain withdrew from the EU.

It is hard to define, the issue has largely been boiled down to a call for Wales to have its say and to choose our own destiny, without a lot behind that. At the same time there is certainly the use of left leaning rhetoric, “Wales has been given a raw deal” in the context of the industrial decline and without the replacement of equally well-paying jobs – before the expansion of the EU in eastern Europe, Wales received category 1 funding because it was one of the most disadvantaged areas of the EU. There are certainly many politicians talking left on the issue, attacking the right-wing Westminster government and the cuts and austerity by the Labour led Welsh parliament as examples.

Plaid Cymru –The Party of Wales– is the main nationalist party within Wales. It had previously ruled out the idea of independence at all, but now many within, including the leader Adam Price call openly for a referendum. In recent years they have used slogans like “Don’t vote labour for your fathers, vote Plaid for your children”. The intent behind it is to say that they represent the social democratic values that Labour used to but no longer ring true. There is truth in that assertion.

We could talk for hours about the nature of Plaid Cymru, but to summarise it is a broad-based party which has members and representatives which range from centre-right to fairly left. Some of whom we have in the past worked closely with. Leanne Wood, the previous leader for example, took a worker’s wage, though the exact details of this are unknown. The workers’ representatives on a worker’s wage, of course is something which ISA has always prided itself on. Though she herself, whilst not smeared in the same way Corbyn was, still suffered the fate of attempting to appease the right of the party, not anyway near to the extent of Labour, but certainly diluted her socialist policies as leader of the party.

There is also a geographic divide to a certain extend where the more rural areas of Wales see a more right-wing version of the party where the more urban areas are more left.

There is not really a Welsh left as such, there certainly is a left-wing of Plaid Cymru and the same is true of Welsh Labour. There is also a much smaller Welsh Nationalist Party set up by Neil McEvoy a maverick politician, hated by activists as a breakaway from Plaid Cymru, which currently has elected McEvoy as a member of the Welsh Parliament, often talking left.

The Labour left, and the Labour party more generally do not support independence, but polls also indicated that amongst those who do support independence, a higher proportion are Labour voters. More recently the Green Party of England and Wales announced a policy change, stating that in the event of a referendum they would campaign for an Independent Wales.

Of course, aside from this you also have organisations like Socialist Alternative active in Wales which would form part of a Welsh left.

This is an interesting question, I don’t think Corbyn had much effect on this to be honest.

One of Corbyn’s weaknesses was his support for the continued union and not openly supporting Scottish independence and remained totally silent on the issue of Wales. I think what is likely to happen is that since the attacks on Corbyn by the Labour leadership, support for Welsh independence will rise further from an already historically high point, as disenfranchised Corbynistas, particularly young people, will be looking for an outlet to fight back against the Westminster government.

I certainly would not describe it as right-wing nationalist, anyone who would fit that mould is likely to be a British nationalist and ardently opposed to the breakup of the union including any form of Welsh devolution or independence.

I would describe it as generally left or progressive. Much of the intention behind it can often be attributed to avoiding Conservative rule from London – that’s obviously an over-simplification of the issue but it certainly plays a big part on the rising movement. Though equally, there are many on the left (the Labour left being the most notable but others too) who would oppose independence, with some sections of the welsh working class seeing the Welsh parliament as useless and ineffective, because they have been completely ineffective in their opposition to austerity measures.

A complex question to answer really, I think that workers and youth in Wales, like the rest of Britain, see the EU in a very mixed way. The EU of course is a neoliberal institution which only operates in the interests of big business. I think that was very clear in the Greek movement against the EU, however that was not clear in the Brexit referendum in the way it was understood by many, particularly many radical young people who saw maintaining membership of the EU as a kind of internationalism. As Marxists of course we would argue that internationalism is for workers organisations and not for capitalist governments, but that does not stop many from viewing it that way.

In many ways, this has probably played a part in the rise in the support for Welsh independence, the idea of an Independent Wales staying in the EU. Plaid Cymru have always been big supporters of the EU and this is the kind of thing being advocated by the Scottish National Party in Scotland (not to mention the problems created in Northern Ireland with either a north/south or east/west border after withdrawal from the EU).

Other movements across Europe undoubtedly have played a part in influencing the rise of Welsh independence as well, the movements in Catalunya to give just one example.

I am glad you asked, this of course is the most relevant question. I think the most important aspect is to look at what type of Wales we are trying to build. We only have to look at the history of the Welsh Assembly, which earlier this year changed its name to Welsh Parliament to reflect its increased powers. Since its establishment in 1999 it has presided over cuts in many areas, health and education, whilst always presenting themselves as better than London, the results were either the same or nor far off.

On this basis an independent Wales run by either Labour or Plaid Cymru would simply show us more of the same with no real change. More important than independence, would be the policies put forward – whether they are in the interests of working class people or the interests of the rich.

The key has to be forging a new left workers’ party in Wales to put forward a genuine Socialist Alternative for Wales, to hold the Welsh politicians particularly Labour and Plaid Cymru to account, and to aim to build and campaign on policies in the interests of ordinary workers and young people throughout Wales, for a Socialist Wales as part of a voluntary federation alongside England, Scotland & Ireland as a step towards building a Socialist Europe