Santiago Roncagliolo “And Free Us From Evil”: The Catholic Church and Fujimorismo 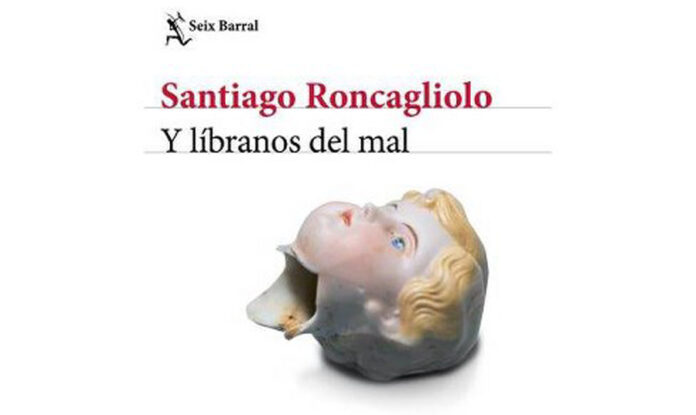 Jimmy has just finished high school and has no concrete plans for his future. So, when he learns that his grandmother has fallen gravely ill, he volunteers to leave Brooklyn and travel back to his father’s native city, Lima. There, in his grandmother’s house, he discovers what his father used to read as a teenager. The Bible, the writings of the Holy Fathers of the Catholic Church, but also the writings of Benito Mussolini and Primo de Rivera, one of the founders of Spanish fascism. This leads him to try and find more about his father’s secrets. A series of chance encounters lead young Jimmy to discover that his father lived in a convent of a religious sect, with contacts in the government, and the higher echelons of the Catholic Church.

His most shocking discovery, however, is that those who entered the convents had undergone brainwashing and were used as unpaid staff by the sect’s leaders – either as servants in the convents, or doing missionary work in run down neighbourhoods. There was systematic use of ritual torture as a means of punishment against even hints of dissent, as well as sexual abuse in the form of “yoga exercises” that the young members of the convents suffered at the hands of the leadership of the “community”; a “community” that destroyed the life of many of its members.

The story behind the book

In reality, Jimmy’s quest for the truth is a literary device, used so that Santiago Roncagliolo, the writer of the book, can retell us the story of the Brotherhood of Christian Life (Sodalitium Christianae Vitae or Sodalicio de la Vida Cristiana), a religious sect that was founded in 1971 by Luis Ignacio Figari. Figari, in his youth, was a follower of Franco, and had founded a Peruvian fascist organisation, inspired by Franco’s Falange. The Sodalitium held ultra-right and fundamentalist views on religion and politics.

Its ideology was based on extreme anticommunism, socially conservative views, military discipline and full adherence to the “holy scriptures”. For a lot of years it was supported by a big part of the leadership of the Catholic Church, as it was seen as a line of defense against the theological current of Liberation Theology, which was saying that a Christian’s ultimate duty is the liberation of mankind from tyranny and social injustice. The aforementioned current was gaining ground in Latin America at the time.

During the eighties, the Sodalitium expands and opens chapters and convents around the country and the whole region, expanding to Brasil, Chile and Colombia. It recruits new members en-masse, especially the young offspring of rich and middle class families coming from European ancestors, that are put through a grueling training regime. Through this process, they undertake to “voluntarily” complete tasks that have to do, either with the day to day running of the convents, or with missionary work, the organisation of religious conventions, in an effort to create “a Culture which looks towards God”. All this with the help of the Lima archdiocese and other leading figures of the catholic church in Peru and Brazil.

During the nineties, the Sodalitium becomes one of the pillars of Fujimorismo (named after Alberto Fujimori, who was Peru’s extremely right wing and neoliberal president, at the time), an ideology that combines extreme Thatcherism, social conservatism and racist policies, bordering on cultural and biological genocide. During Fujimori’s second term, in the end of the nineties, hundreds of thousands of indigenous women were forcibly sterilised. And that happened in a country where 26% of the populace is comprised of indigenous people, and another 61% comes from a mestizo background, meaning that they have both indigenous and European ancestry.

The first complaints against the Sodalitium, alleging sexual abuse and brainwashing, surfaced in 2011. From then on, most of the organisation’s historical leadership has fled Peru, under the protection of the highest echelons of the Catholic Church

The relationship between fundamentalist Christian communities and organisations  and the Latin American far right does not confine itself only in Peru. Communities like the Sodalitium were part of the base of support for Augusto Pinochet’s dictatorship in Chile. Members of such groupings were active in planning and executing the Condor Plan, helping out in torturing and abducting thousands of political prisoners, but also helping DINA (Pinochet’s secret service) by facilitating arms deals whenever DINA needed to buy or sell weapons.

Evangelical pastors are becoming more and more powerful in Central American countries, like Guatemala, El Salvador and Honduras, laying the groundwork for hyperconservative ideas and far right politicians. And if we take a closer look at Brazil, one of the reasons that Jair Bolsonaro was elected president, was due to the support offered by popular tele-evangelists.

A bit more about the book

Roncagliolo uses Jimmy’s quest in order to narrate the story, but Jimmy is not the story’s protagonist. Even though the revelations have a profound effect on him, his family, and, possibly, his future, Jimmy himself is not a catalyst for the revelation of the scandal to the public.

That has already happened, and Jimmy himself is aware of that, since he follows the news on Social Media, television and the press. Jimmy’s investigation leads to a multi layered and a bit fragmented “telling of the tale”, as young Jimmy hears about his father’s past, what lead him to the Sodalitium and how he climbed the steps of its hierarchy, until his final downfall, from people that knew his father as a young man. Despite the not so traditional narration, the book can be easily read without the reader’s attention wandering off.

Moreover, its shows, in a clear way, that in a world that is in turmoil, the leaderships of the more fanaticised and fundamentalist elements of the congregation, along with the more “mainstream” religious leaders, will always side with the more ruthless and voracious parts of the bourgeoisie…