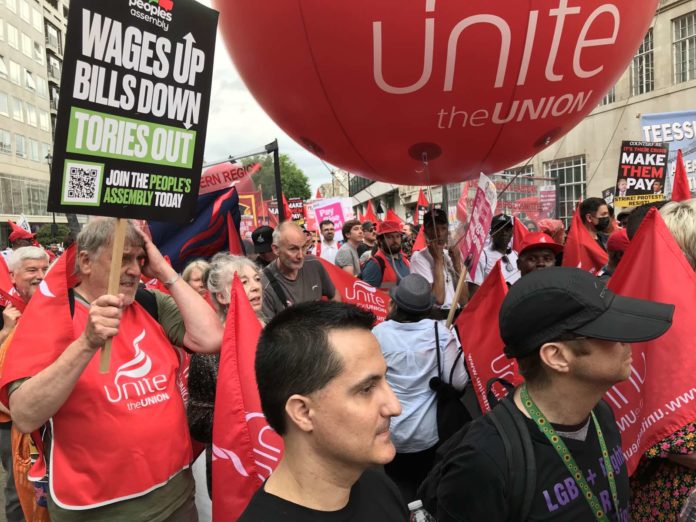 Thousands of demonstrators marched through the streets of London on Saturday, June 18th, in a Trades Union Congress (TUC) organised march to demand better living conditions.

Demonstrators were calling for wage increases, better working conditions and the end to fire and rehire schemes. They were demanding more because of the massive increases in the cost of living that have taken place over the last twelve months, with inflation now estimated to be 11%. Energy prices are set to double, with the energy price cap being increased by 54% in April and set to increase further later in the year. The National Institute for Economic and Social Research has estimated that 250,000 people will fall into destitution next year and that at least 1.5 million households will struggle to pay for food and energy. Research carried out by the TUC suggests that the average household has lost £20,000 since 2008 because of wages not keeping up with inflation. A report by UNITE (titled Corporate Profiteering and the Cost-of-Living Crisis), has established that almost 60% of current inflation is due to corporate profiteering, while only about 8% is due to wage increases. The Unite general secretary, Sharron Graham, stated that

“Worker’s wages and what they can buy are being squeezed by corporate wreckers pursuing runaway profits quite literally at our expense.”

This research contradicts the mantra offered by the government and the BBC -its mouthpiece- which tries to place the blame for inflation on wage increases.

The marchers gathered at Portland Place and marched to Parliament Square where a rally was held. Most of the major trade unions had blocks on the march with UNISON leading off.

The RMT (transport workers), who will be striking next week, had a significant and well supported block, with calls for their support being made throughout the march and at the rally afterwards. Slogans were many and various from trades unions and political groups as well as individuals. These included: “Eat the Rich”, “Tax Wealth not Workers”, “Cut War not Welfare”, but my personal favourite, which was home-made and held aloft by a little girl stated “Pay my mummy more. Pay the teachers more. More pay = More Sweets.”

Some left, political parties and groupings also had blocks on the march with Acorn (the tenants union) having an imaginative intervention from one of the side-streets, which significantly increased their visibility. There were dozens of stalls from left political parties and groupings (SP, SWP, Counterfire, SA etc), but also from the NHS campaigning groups and The People’s Assembly.

Whistles were blown, hooters hooting and chants chanted. There were drum bands and jazz bands with the Fire Brigades Union bringing their bagpipe band to the occasion. The march was colourful with many workers wearing their union’s colours. This was the first major demonstration organised by the TUC since 2011. The 2011 march, entitled “The March for the Alternative” was attended by between 250,000 and 500,000 people.

Saturday’s march was attended by far fewer. The fact that it ended in Parliament Square and not Hyde Park is testament to the fact that the organisers expected the turnout to be in the low tens of thousands. I estimated, using the Jacobs’ method of estimation, that there were about 20,000 on the march this time although another estimate made by Dr Louise Raw put the number at 40,000 and the SWP put the number at 50,000. In either event, the lower turn-out is indicative of a generally poor build by the TUC for the event. Many trades unionists didn’t know it was happening and the general public seemed unaware that the event was planned. Many trades unionists, especially in Yorkshire, were also angered by the fact that the event coincided with the Orgreave Rally and chose to attend that rally instead. They felt that the timing of the event was insensitive to the issues being expressed at the Orgreave event which commemorates the violent suppression by the police of the miners during the 1980s’ miners’ strike.

There was also a degree of disappointment at the lack of a fighting lead from the TUC following the 2011 event. The TUC was seen at that time by many to have organised the rally in order to allow workers to let off steam, with no plan at all to build from it and the same could be said about the current event.

At the rally which followed this years’ march there were good speeches made from several prominent trade union leaders. Mark Serwotka (general secretary PCS Civil Service Workers) called for united action across the trade union movement as early as this Autumn when the PCS will be balloting for industrial action. RMT general secretary, Mick Lynch, stated that

And in an obvious reference to the Labour Party, who refuse to back the RMT strike he said

“And there are people over there, in that Parliament, who are meant to be on our side and have got to answer the question, which side are you on?”

“This is about saying to the government, we demand better. They do not understand us because they are not like us.”

Let’s hope that this march can be the start of united resistance across the trade union movement and beyond. It is clear that attacks on wages and workers rights are being ratchetted up by the government and that we can’t look to the Labour Party for any kind of alternative.

Workers will be forced into struggle by the growing cost of living crisis and it is vital that they don’t accept lower than inflation pay rises, but demand that the rich pay for the crisis they have created. As Mark Serwotka suggested, unions need to coordinate their action and build towards mass strikes and struggles across the UK. The TUC could play a significant part in coordinating such struggles, but not if it follows its previous approach of conciliation with the state as it has during the Covid pandemic and as it also did following the 2011 March for the Alternative. The Left also needs to work together in towns and cities across the UK, in activist groups, trades unions, trades councils and elsewhere. In order to build the movement, the Left has to build in unity and accommodate difference.