Over 800 youth at the “Art against Fascism” festival in Athens 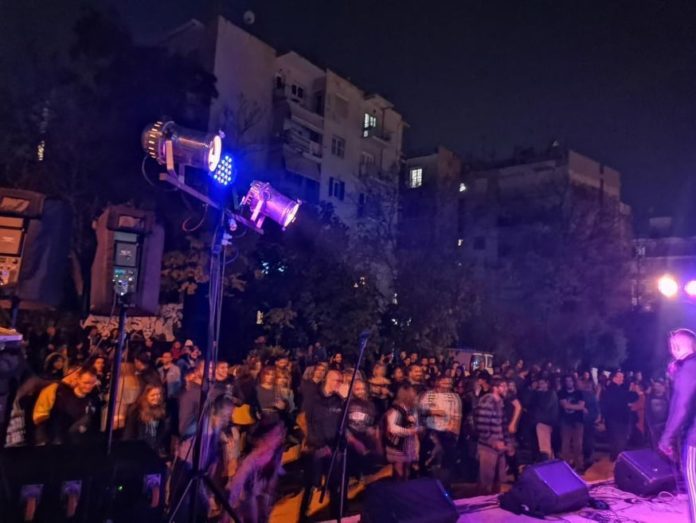 Art against Fascism is a youth festival initiated by Antinazizone since 2018. The general idea behind it, is to give the floor to youth in order to express themselves against fascism in all its forms.

Last year the festival did not take place due to the pandemic. This year it was held on Saturday, November 6, at Drakopoulos Park in Athens, despite being in the middle of the 4th wave of the pandemic and with many people worrying about a new surge in infections. We set modest targets of up to 300 youth, but the outcome surpassed all our expectations with more than 800 people attending.

The event opened with live spray painting by Jou and continued with the bands Asymvivastoi, Unfallen, Ν’Cheezed, Mysterios Typos & El Perro, Their Methlab and Ulalume. Unfortunately, from the announced line-up, the group Anti-Logikis were unable to participate, as one of the band members fell ill the night before.

Seto painted graffiti on the wall behind the musicians during the concert, and short speeches by the festival organisers were given at the intervals between the various bands.

A photography exhibition by Aretha Vasiliou Tiniakou (Pomfolyga) was also hosted on the spot, while Grigoris Kokkinos created a very nice banner that will decorate future editions of the Art Against Fascism festival.

Group Yorum (from Turkey) also took the floor; Group Yorum is a political music group that fights against fascism and imperialism and has been the targeted of Erdogan’s persecution for many years. Many of its members have been jailed, tortured and led to death by the regime through hunger strikes.

There was a self-organised drinks and kebab bar, while antifascist badges, shirts and other items were on sale in the area. All the income is intended for financial support to the antifascist struggle and to contribute to the cost of this year’s festival.

The festival became a reality thanks to volunteer work by many youth. In addition to those who have participated and helped in previous years, a lot of new people contacted us to help with the organisation, the vast majority of whom were women. This is no coincidence, as in recent years there has been a big wave of radicalisation and politicisation of young women in Greece and internationally.

This year’s Art against Fascism was the 4th in a row. Each festival has had different content and characteristics, as it is shaped by the people who participate both on the artistic and the organisational level.

As the neo-Nazis in Greece are trying to make a come-back, art can be one of the weapons to continue the struggle against fascism!