Greece: One year after the Golden Dawn conviction, fascists try to make a come-back 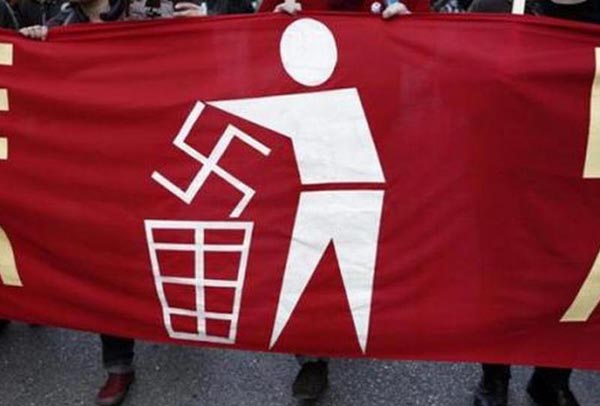 One year ago, the verdict of the court which tried the Golden Dawn leaders was heard in Athens: “Guilty- they are a criminal organization”. The announcement was made to the 35,000-strong demonstration outside the high court and it sent waves of joy and relief not only to the antifascist movement but also to wide layers of Greek society. One year after that historic day, fascist gangs try to regroup and take the streets again. Below we publish an edited and translated version of a combination of articles from the Xekinima website on the situation.

October 7, marks one year since the historic decision to convict Golden Dawn as a criminal organization and to imprison 69 of its leading cadre. The verdict represented an important milestone in the history of the anti-fascist struggle. The movement forced the “hand of justice” and succeeded in putting in jail the leadership of the most massive (relative to the population) neo-Nazi party in Europe.

Golden Dawn was a party with a 40-year history; for a number of years after the 2010 crisis it was the 3rd party in Greek Parliament; it reached 9,4% and 537,000 votes in the European Parliament elections in 2014 (i.e. after P. Fyssas was murdered!); it kept 70 offices/centers all over the country with numerous representatives in city and regional councils; it had a sister party in Cyprus (ELAM) and other international links; two weekly newspapers, one of them in circulation for 27 years; it had built strongholds in working class areas in Athens; it was responsible for the murders of Shahzad Luqman and Pavlos Fyssas and hundreds of other murderous attacks since 1992.

Who put Golden Dawn in jail?

Some sections of the elite make a systematic effort to depict a picture of the big bourgeois parties and the “justice system”, acting as a “wall of democracy” that put Golden Dawn in jail.

This is a false and dangerous narrative. It overlooks the fact that the bourgeois state and the parties that serve it let Golden Dawn run unchecked from 1980 to 2013 – allowing it to soar from a small fringe group and near-zero percentages at elctions, to being initially elected to the Municipality of Athens in 2010, entering parliament in 2012 and approaching double-digit percentages in the polls shortly before the murder of P. Fyssas. Also, the government, the police and the justice system allowed the Golden Dawn death squads to carry out hundreds of attacks against immigrants, antifascists, leftists, LGBTQ people, trade unionists, etc, for decades.

It was only after the murder of the rap singer and antifascist activist Pavlos Fyssas that the state decided to act. Under the weight of the explosion of the antifascist movement social anger, the then Minister of Public Order N. Dendias (now Foreign Minister) “discovered” in his drawer 32 “forgotten” files concerning Golden Dawn attacks.

In the days following the murder a hundred demonstrations were organized, with tens of thousands in the streets of different cities nationwide. Mobilizations were also organized in other countries outside Greece. This social pressure was also reflected on the mainstream media, which in turn abandoned their usual narrative about “the two extremes”, – they dressed up as “anti-fascists” and in this way began to put pressure on the government.

When the trial finally started, the media and the government did everything possible to keep it out of the spotlights. No cameras were allowed, the hearings took place in a remote and small room of the women’s prison far away from Athens (at Korydallos, Piraeus) with the process lasting a total of 5,5 years! And, of course, without the parties of the so-called “wall of democracy” doing the slightest thing to mobilize forces to ensure the conviction of Golden Dawn.

This happened due to the huge pressure of a movement that developed under lockdown conditions. Indeed, the antifascist movement reacted strongly when, at the beginning of 2020, the public prosecutor declared her intentions of pronouncing the Golden Dawn leaders innocent.

Where we are today

Today, one year later, Golden Dawn and the scattered pieces of the neo-fascist block are trying to return back to activity.

This is an international phenomenon: the economic crisis, the pandemic and the political vacuum on the left are preparing the ground for the far right, which is on the rise in many countries. In Italy, two far-right parties, the “Brothers of Italy” and Salvini’s “League”, are leading the polls. In Spain, Portugal and Cyprus, significant electoral successes of far-right parties have been recorded in recent months. In France, it cannot be excluded that Marine Le Pen could become president of the country in next year’s elections.

The same goes for Greece. The conditions under which they developed during the period of the memoranda remains very much the same: poverty and unemployment; thousands of refugees trying to reach Europe to escape wars, dictatorships and famine, are used by the far-right as scapegoats; at the same time they are playing on people’s confusion and fear for the pandemic and vaccines, promoting conspiracy theories and calling for anti-vaccine mobilizations to rally and increase their forces.

It’s been some months now in the course of which we see the fascists trying to escalate their actions. The most important intervention they were able to organize was in Stavroupoli, a working-class neighbourhood in west Thessaloniki. Local school students and other fascists, with the help of a teacher, used the school as a base to attack university students who were distributing a leaflet against the neoliberal reforms in education by the government. They did the same against the anti-fascist protests organized in the following days, and also attacked and sent to hospital fellow school students who had the courage to speak out against them. Some weeks before they had also performed an attack against the city’s Gay Pride.

The attacks were very violent. They used iron bars, sticks, stones and Molotov cocktails. They had a hidden arsenal inside the school, and weapons were subsequently found in the homes of some of them.

But the attacks did not stop there. Similar events happened in a school of a nearby area (Evosmos); fascists attacked with iron chains and tasers Communist Party (KKE) members who were handing out leaflets in a square in Ilioupolis, a neighboring area; they also attacked a public meeting of a left group in Neo Heraklion, Athens. At the time of writing, there are several fascist gatherings announced for the coming days.

It is clear that what we see is an organized plan by the neo-nazis to create tension around October 7, to show that they were not “done” and that they plan to raise up their heads again.

For a United Antifascist Front

Some days after the Golden Dawn conviction, last year, we wrote:

“The struggle against fascism does not end with a court decision. We will continue, from a better place and with increased confidence that will play a role in relation to other movements too. We know also that a campaign, as successful as it can be, in itself is not enough to smash fascism and the system that nurtures it.”[1]

“the biggest mistake that the antifascist movement can make is to assume that the battle, not to mention the war, against fascism is over”[2]

One year later, we clearly see the warning signs of the fascists being on the rise again, using violence and terrorism.

Fascism has always had a certain social base in Greece. And every time it grew stronger it has led society to bloodsheds. From the followers of the dictator Metaxas in the ‘30s, to the Nazi collaborators and Quislings during WWII and the supporters of the Junta of the Colonels in ’67-’74. All these are the ancestors of Golden Dawn and the other neo-nazi groups.

The force that has always stopped them was the same: the organization and the mass actions of the most conscious sections of society.

They won’t stop unless we stop them! Fascist attacks are not going to be obstructed by the government. That is why the anti-fascist movement needs to get better organized, more united and more massive. The movement should include the organized forces of the left, the anti-authoritarian collectives, the militant unions, parents’ and teachers’ associations, students’ councils, the feminist and LGBTQI groups, and –above all– all the workers’ movement and young people.

xekinima.org: “Guilty” – the verdict against Golden Dawn, a victory of the Greek antifascist movement and working class