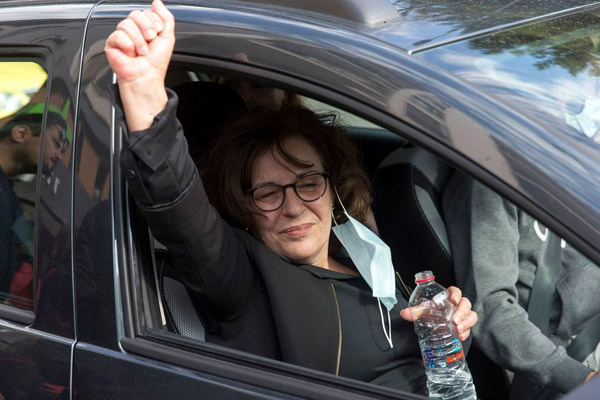 October 7 was truly historic. It marked the most important political victory of the anti-fascist movement in recent Greek history. It took two additional weeks for the trial against Golden Dawn leaders to conclude, on Thursday, October 22, while the court was considering “mitigating circumstances” arguments and other ridiculous claims of “hardship” by the key leaders of the Nazi organisation, with the public prosecutor proposing the suspension (until GD’s appeal) of their sentences with the exception of the executioner, Rupakias.

The final verdict was the best possible outcome within the legal framework of “justice” under capitalism. It should be noted that even a few days before the verdict, Golden Dawn still had the tacit support of the mainstream mass media (who either kept silent or, until recently, openly promoted it) of a section of the government as well as of the official and unofficial state apparatus.

Golden Dawn’s entire leadership is heading to prison: Nikos Mihaloliakos, Ioannis Lagos, Elias Kasidiaris, Giorgos Germenis, Artemis Mattheopoulos, Christos Pappas and Elias Panagiotaros. They were all found unanimously guilty of leading a criminal organization and sentenced to 13 years’ incarceration, except for Mattheopoulos who got 10 years. The European Parliament will have to vote to waive legal immunity for Lagos, who is elected in that body.

The court did not accept claims of mitigating circumstances and ruled they have to serve their sentence immediately.

Victory for the anti-fascist movement

This is a clear victory for the antifascist movement, which includes first and foremost the family of Pavlos Fyssas and especially his mother Magda, who spearheaded a superhuman struggle for justice and rightly became a symbol of the movement. Credit also must go to the prosecuting attorneys and to the eye-witnesses Dimitra Zorzou and Paraskevi Karagiannidiou who, despite threats from Golden Dawn members, testified at the trial.  Finally, credit must go to the few journalists who consistently covered the trial from day through the “Golden Dawn Watch”.

A decisive factor and a catalyst for the movement to continue despite all obstacles were the antifascist collectives, groups, and sections of the radical and revolutionary left as well as a section of the anarchists. These were the forces that set up local antifascist committees and solidarity networks, and bore the brunt by the thugs of GD squads. They were the forces that organized countless rallies, marches, social media campaigns, donated tons of material support, offered courage, a perspective and moral support to the movement, especially in those moments when all seemed lost.

There are of course those, apologists of the system, who claim that the antifascist movement didn’t play a role and that the courts and the law alone made this victory possible. In truth, without the movement on the streets, we wouldn’t be talking about “the end of GD”, at least its current incarnation.

The legal and the political systems had known “Golden Dawn” since its inception in 1980. They knew its leader, Mihaloliakos since the mid ‘70s, when he had taken part in an attack on the British Embassy and another attack against five journalists at the funeral of the known torturer of the dictatorship, Mallios. Mihaloliakos was involved in the bombings in two Athens cinemas with dozens of injured victims. At the trial, Mihaloliakos’ lawyer and brother referred to the bombings as a “misdemeanor” which took place when the “Führer” was 22 years old.

The capitalist system incubated, nurtured and, when it deemed necessary, launched the Golden Dawn fascists.

With the stamp of approval of the Supreme Court, the system had provided the fascists with the opportunity to disguise themselves as a “political party” and participate in elections.

All possible efforts were made to turn the Golden Dawn trial into a sideshow, as it dragged on for five-and-a-half years, always far away from the spotlight of the mainstream media.

Until the very end, the voices of the “deep state” and the legal system, like public prosecutor A. Economou, tried to protect its wayward “children” calling for the criminal charges against GD to be dropped. In the end, the government and a section of the judicial apparatus were finally compelled to put themselves in the anti-fascist camp – not only because of the unassailable facts of the case, but because they had no other choice under the pressure of the social movement. The anti-fascist campaign was gaining mass support as the verdict was approaching and the October 7 mass rally signified a current within society that swept everything and could not be ignored.

Concerns about the Prison Sentences

Of course, the prison sentences are low compared with what the antifascist movement demanded.

GD’s leader Mihaloliakos, may only serve 34 months – because of factors such as: time served in custody after his arrest (18 months) the right to petition for parole after serving 2/5 of his sentence, a possibility of prison work, as well as his age (for prisoners over 60, each day served counts as double).

Similar factors apply to the other defendants. Even Fyssas’ murderer, Roupakias, despite the life sentence, could be paroled after 17 years.

Suspended sentences were given to 12 other GD members, including notorious figures like Zaroulia, Arvanitis, etc., while others were found “not guilty,” such as Themis Skordeli, known in the Agios Panteleimonas area for her verbal outbursts of racist indignation against immigrants.

The charges of physical attacks on trade unionists of PAME (a Communist Party trade union federation) by fascist squads were downgraded from felony to misdemeanor.

These issues have led to some questioning in the movement whether this was really a “victory.” The answer is, given the conditions and the limits of the existing legal system it was a clear victory.

That doesn’t mean that the fight against fascism is over. Nor does it mean we won’t ever see far-right or neo-nazi monsters in new incarnations. All the factors that create such monstrosities remain, not just in Greece but internationally.

Seven far-right organizations exist and work outside the parliamentary system, while smaller groups are dispersed around the country – such as “Ieros Lohos” (Sacred Band) in Salonika, “patriot” movements in other areas, shock troops of thugs especially in the north Aegean islands, etc.

However, we should not underestimate the magnitude of what we accomplished. We defeated Europe’s biggest and electorally most successful Nazi organization of recent times.

For a whole number of years Golden Dawn was consistently the 3rd party in Greek Parliament, it reached 9.4% and 537,000 votes in the European Parliament elections in 2014 (i.e. even after P. Fyssas murder) it had 70 offices all over the country, with numerous representatives in city and regional councils, it had a sister party in Cyprus (ELAM) and other international links, and two weekly newspapers, one of them in circulation for 27 years.

Let’s not forget the impenetrable enclaves Golden Dawn had set up in areas like Agios Panteleimon, Nikea, Perama and elsewhere. And of course, the murders of Sahjat Lukman and Pavlos Fyssas and hundreds of other murderous attacks since 1992.

All that under the guise of a “legitimate political party.”

All that is now finished. Today they have no members in the Greek Parliament and soon in the European Parliament. The whole leadership is in jail, even the leaders of Golden Dawn’s main split-offs. They have no state resources. They now bear the stigma of a criminal gang – and that is important in the eyes of the sections of society that voted for them but are not conscious Nazis.

And all that is the result of the actions of the antifascist movement.

The campaign “They Are Not Innocent”, formed with the initiative of the Athens-Piraeus Antifascist Coordination Committee, played an exceptional role. Its impact reached all corners of the country and beyond. Thousands of people of all ages and especially the youth were involved. It is a legacy that we will keep and continue for the future.

The struggle against fascism does not end with a court decision. We will continue, from a better place and with increased confidence that will play a role in relation to other movements too.

We know also that a campaign, as successful as it can be, is not enough to smash fascism and the system that nurtures it. That will require different political means. Above all, it will require a revolutionary left, the one element that’s missing more than any other in Greece as well as internationally. Most of all we need a political alternative that is anti-capitalist, socialist and internationalist in character.

That’s what we have to build. But for a few days, we should enjoy and celebrate our victory and appreciate the importance of what was achieved. Above all, watching the scowling faces of the “little Führer” and his criminal buddies being escorted to prison: Priceless!!