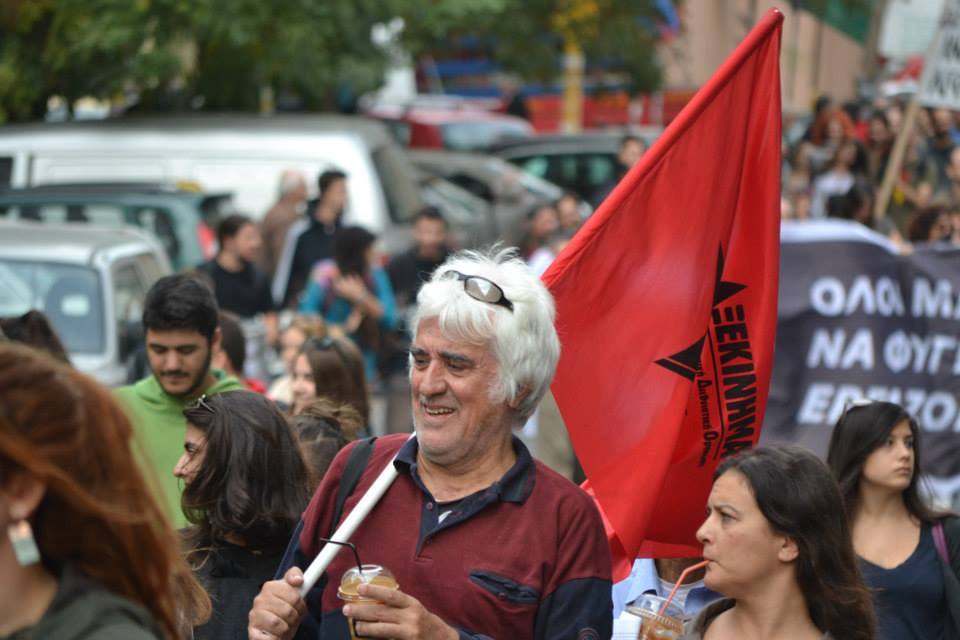 In the morning of May 14th, our comrade, brother and friend, Giannis Vogiatzis passed away after losing the battle against brain cancer of which he had recently been diagnosed.

On Friday 15th May, Giannis’s body will be cremated in Chalkida and on Sunday a small circle of comrades and friends will gather to say their final goodbye. When conditions allow it, we are going to organize a ceremony to pay our respects to Giannis and celebrate his life.

Giannis was born in 1960. Already from his school years he began to work on construction sites, while at the same time getting politicized and joining PASOK which at the time was a pole of attraction for working class people fighting for social change. In 1979 he was accepted to study ‘Structural Engineering Work’ at the Patras Technical Institute and immediately became active in the student occupation movement against the notorious Act 815. Due to this he was expelled from PASOK for his radical ideas. Giannis maintained to this day strong friendships that began during his student years.

From 1985 his health problems began. After returning from Patras and completing his obligatory military service he worked in warehouses. In general, due to his health issues he spent long time being unemployed.

In 1989 he joined Xekinima where he remained active until his final days.

He also worked as a contract worker in waste management for the Thessaloniki City Council. A few months ago, he submitted his pension application but unfortunately did not get to enjoy its approval.

Despite the serious health issues and financial difficulties, he never lost his sense of humor or morale.

He hardly ever missed a demonstration or a political activity. He was active in the Open Citizens Assembly of Kalamaria (where he lived) and participated in organizing open markets (where producers could sell their goods without middlemen to the residents- there was a movement in Greece over this) and other events.

Even during the last while, despite having to move in crutches, he never missed assemblies, events and other activities of the wider movement.

We can hardly remember a political meeting or mobilization that Giannis was not present. Always there, expressing his opinion or his disagreement, always ready to fight for the building of ‘Xekinima’, as he believed that to achieve radical social change it is necessary to build a mass revolutionary party. He remained active in the struggle all these years, through defeats and victories, even during the 1990s, the ‘dark’ years for the Left, as a selfless fighter.

Giannis was not the kind of person that was shy with words. Animated and honest, he always spoke his mind. During meetings and assemblies, he always liked to dig a little deeper on what was being said. He wanted to say something that wasn’t touched upon by others, but reflected the facts that was important in his opinion. And even though his refusal to be diplomatic had created tension at times, the people that knew him well, knew that his comments had no ill-feelings behind them.

An avid fan of archiving, before the transition to the digital press era, he kept in our offices a massive archive for every possible topic.

In the recent past, he developed a strong friendship with comrade Ged Travers who lived in Greece for a while. Ged’s passing from cancer as well, had a big impact on Giannis.

Comrade Giannis fare well. We, here, will continue our common struggle to build a fairer and humane society, a socialist society we dreamt of together