Italy: The Autonomous Collective of Dock Workers of Genoa Appeals for Solidarity 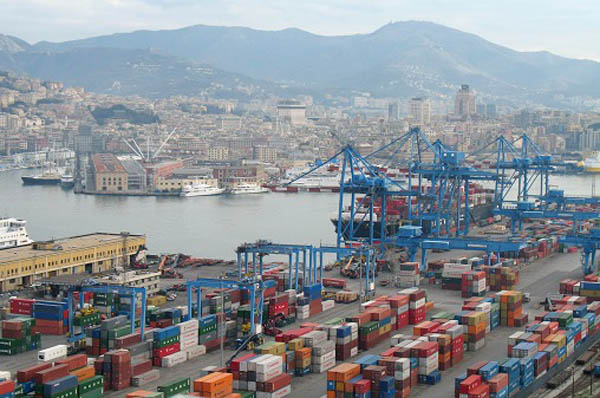 Workers at the port of Genoa, members of the Autonomous Collective of Dock Workers (CALP) have called for a day of struggle and mobilization next Monday, February 17th, when the arrival of the Saudi ship “Bahri Yanbu” is expected. It is carrying war materials and weapon systems destined for the conflict in Yemen. “Bahri Yanbu” belongs to the largest Saudi shipping company, “Bahri”, owned by the Saudi government.

Last May, a strike called by the FILT-CGIL trade union federation supported the struggle started by the dockers, aided by political and trade union militants and important sectors of the working class of Genoa. They prevented the ship from loading its cargo. “Bahri Yanbu” was forced to leave the port of Genoa late in the evening of 20th May without the new weapons. It is of fundamental importance that the great success of last May be repeated next Monday.

The CALP workers have written the following appeal:

“We are the dockers of Genoa, who went on strike to block cargo being loaded onto the ship “Bahri Yanbu” and electric generators onto the “Bahri Jazan” intended for use by the Saudi National Guard. We do not believe we are standing up as saviors of humanity or judges of the world’s evils. But we want Italy to suspend the sale of weapons to Saudi Arabia. We belong to a maritime and port history and culture, in which hospitality and rescue are fundamental values and where civilian trade is practiced to increase the prosperity of peoples”.

Resistenze Internazionali subscribes to every word of the appeal of the CALP comrades, written in the language of the working class and of international solidarity. We are working to build the mobilization against the arrival of the Saudi ship.

We object to the ship entering the inlet. Should the ship enter the harbour, we demand that its contents be thoroughly inspected by workers’ delegates and security representatives of the port of Genoa. The presence in any form of war materials, even if not weapons, is intolerable. It represents a blatant violation of international law, the Italian Constitution and laws and endangers the safety of people living near the port.

We will be physically present at the port with the CALP workers, rank and file union members and peace activists to prevent this ship from entering the port of Genoa.

With a copy to: [email protected]

Below we reproduce the Joint communiqué written by the Coordination of the Left of the Opposition, supported by Resistenze Internazionali, in support of the dockers’ call.Alongside the Port Workers Against War

Alongside the Port Workers Against War

The National Coordination of the Left of the Opposition supports the action to boycott warships proposed and undertaken by the Autonomous Collective of the Port Workers of Genoa, following the action carried out last May. As it will also support every other initiative that clearly opposes war, in the same spirit of class solidarity.

The battle against war cannot be limited to words, nor restricted by borders. It is workers, male and female, who are today forced to produce, sell, and transport instruments of death to be used against other workers and human beings, for the sole purpose of fattening the profits of the big capitalists, shareholders and bankers. It is the same workers, who can stop this traffic.

The Italian State and its governments speak of “peace”, but protect the war industry. The Ministry of Treasury helps to provide capital for the giants of the military industry, and promotes cartels and mergers with the arms companies of other countries (both in and outside the European Union) so as to expand the market and gain new areas of influence, an imperialist policy. This policy, by its very nature, knows no principles and morals outside of profit. It trades with bloodthirsty regimes such as Saudi Arabia, with military regimes who torture people — Egypt, and of course with the great US power, primarily responsible for these policies of war and plunder.

The current Italian government does not distinguish itself in this from its predecessors except perhaps by being more hypocritical.

Workers have nothing to do with this cynical policy. They are asked to produce and sell death only to enrich their masters. They are asked to work exhausting shifts, agree to precarious work, or to lose their rights all for the benefit of those who exploit them. They are asked to help kill other workers, men and women in distant lands, who are also victims of the same oppressive capitalist system.

The action taken by the Genoa port collective is in direct opposition to all this. It defends the interests of workers against the interest of capital, irrespective of all national, ethnic or religious borders. It bases its appeal for peace on the only coherent anchorage it deserves: that of class, that of internationalism. It is no coincidence that this initiative is aimed at all workers. It is not by chance that it is shared with the port workers of other countries and their unions. We hope and demand, therefore, that the various trade unions, starting with the CGIL and its FILT trade union, which already took action during the previous docking of the ship “Bahri Yanbu” in the port of Genoa last May, declares a strike of the port workers for the day the ship lands, whose arrival is scheduled for next February 17th.

As the National Coordination, we therefore support the aims of this action and will work to amplify its message and example. We will continue our general campaign against the war, for the withdrawal of Italian troops from all missions, for the withdrawal of Italy from NATO, which we have pursued since the National Assembly on December 7th and are developing with the national day of mobilization on January 25th. A campaign which we want to continue and on which we will work to build the widest unity in action with all those who share these objectives.