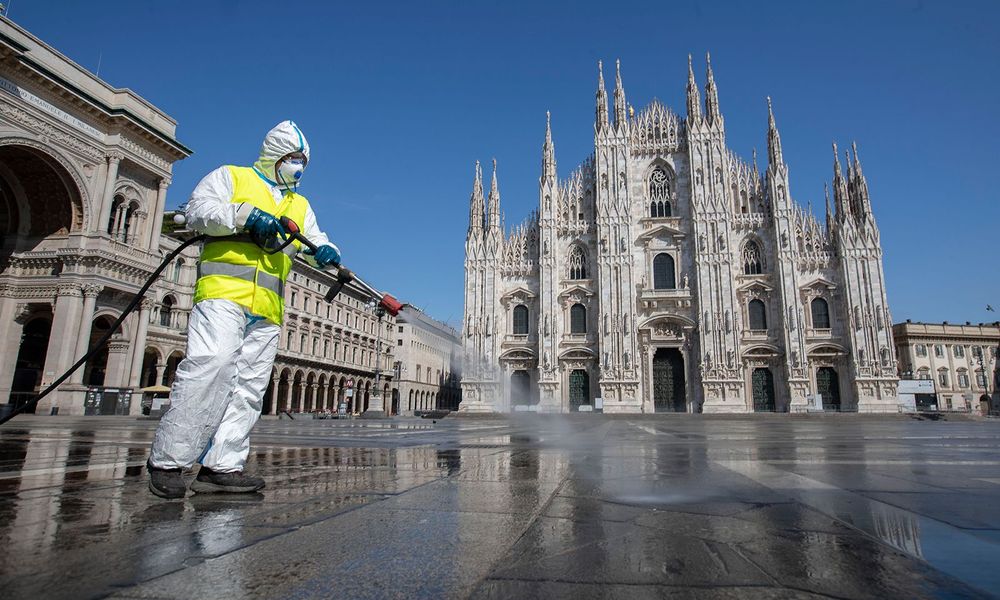 “Xekinima” spoke with Giuliano Brunetti, from Resistenze Internazionali (International Resistance – ISA Italy) about the situation in Italy today in the midst of the Covid-19 pandemic.

Giuliano, Italy was the first western country which suffered massively from the pandemic. What effect did this have on the psychology of the population? What is the picture now?

With more than 35.000 deaths until now, the pandemic has produced on the population several effects that are still developing today. On one side the catastrophic effects of the pandemic on the everyday life have further aggravated the gap between ordinary people and the ruling class which is seen not only as corrupt but also as ineffective and somehow dangerous. Moreover, amongst sectors of the population, there is now a general distrust that developed towards all that is seen as élite, including doctors and scientists. From a general point of view, and given the absence of response to the problems of unemployment and poverty, people are afraid of the economic consequences of the pandemic, they feel that the worst is yet to come, there is a “fear of tomorrow” mood.

In the initial period there was a significant number of strikes with workers demanding a closure of their plants and/or extra safety measures. What is the picture now?

During the first two weeks of March an important wave of strikes developed in the industrial sector. This wave of autonomous strikes started in the car industry and amongst shipyard workers and soon extended to the chemical sector and to other fields. Those strikes were organized without any kind of assistance coming from the Union Confederations. Striking workers were asking for the closure of production out of fear of getting infected.

At the present time the situation is different. Six months of closure has meant a dramatic contraction of the active workforce. Negative prospects for an economic recovery also mean that it is now difficult to go on strike, given the fear of unemployment and, especially, considering that most workers have faced a fall in their incomes during the lockdown months.

What is the picture in the Health Sector? In Greece we had reports of hundreds of health workers and doctors being infected and having died in Italy. Has the government taken any measures to invest in the NHS?

The health sector has been one of the most severely hit by the cuts and privatizations carried out in past years. It is estimated that about 37 billion euros have been cut from public hospitals in the last twenty years.

Furthermore, the regionalization process implemented in the past two decades has meant that the responsibility for the cuts has been passed over to the regions. In reality we have almost twenty different regional Health Departments. Public hospitals have been deprived of essential funds which have been given to private facilities, doctors and nurses have been encouraged to use public facilities for private use. In addition to that, nurse and social staff are still recruited with very precarious contracts via private agencies.

This is the situation in which the pandemic developed. Thousands of NHS staff have been infected and hundreds have died. Notwithstanding the lack of doctors, the government has not yet removed the absurd and unjust selection process by which students can enter the faculty of Medicine, meaning that usually it’s only rich kids that succeed in such challenging exams.

Despite the huge pressure put on doctors and health workers, however, no significant mobilization in the sector has taken place for a long period of time.

In the initial phases of the pandemic, the EU showed complete indifference to the sufferings of the Italian people. Most political parties in Italy in the course of the last decade were also very critical of the EU and the Euro, because the Italian economy was more or less stagnant since the adoption of the Euro. As the pandemic advanced, the EU changed approach and in the past months came up with the 750 bn € recovery package. How do people see the EU and the Euro today?

The perception of ordinary people towards the European Union is very negative, having changed in recent years. In growing sectors of the impoverished middle class there is a growing feeling of rebellion against an economic system that strangles families and small businesses. The radicalization of this petty bourgeoisie is the main element that explains this anti-Eu feeling.

Right and left wing politicians are shifting their responsibility to the EU which is partly responsible for the deterioration of living conditions, as a consequence there is a growing anti-Euro and anti-EU feeling. This new feeling has been translated for example in the birth of a new populist party, launched by a former 5-Star movement politician, called Italexit.

Are there any significant mobilisations of the working class or the youth or of local movements in Italy in this period?

No. Unfortunately at the moment there are no significant movements or struggles from a national point of view. Obviously, there are hundreds of open industrial disputes but all with a defensive character and with no unified strategy or plan. The social movements for their part, also because of the harshness of repression, are stagnating.

What was the impact of the youth movement against climate change and against women suppression on Italian society?

Also in this case, unfortunately, Italy has distinguished itself negatively. The movement against climate warming did not take off. With the exception of a day of student mobilization, which took place with the support of the government and school authorities, there was nothing significant. The feminist movement “Not one less” organized important initiatives and mobilizations that led to the March 8 demonstrations of recent years. These were important mobilizations, but did not have the mass character that they had, for example, in other European countries.

Finally, what is the situation with the Left in Italy? To what extent does this have an effect on class struggle?

The Italian Left from a political, trade union, movement and cultural point of view, has been at its lowest point for several decades. The failures of recent years, participation in bourgeois governments, betrayals and opportunism of the leaderships have developed in a context of low mobilizations and of an weakening of the effective weight of the working class in the general political dynamics.

The current weakness and lack of credibility for the forces of the Left in Italy is not the result of a cynical and cheating fate but of concrete political responsibilities. Today it seems difficult to imagine, but until twenty years ago in Italy we had the strongest and most deeply rooted communist parties in Europe. Rifondazione Comunista had 100,000 members, directed the trade union left in the main confederation and rank and file unions, it was leading students and social movements, had a daily newspaper, hundreds of elected representatives and offices throughout the country. It was a point of reference for the working class in Italy but also in Europe. The decision of the main parties of the Italian Left to support the Liberal Democratic coalition of Romano Prodi in 2006, with the subsequent entry into the government, produced a serious cleavage between the leaderdship of the Left and the working class. Having voted for privatizations and austerity measures, they completely destroyed their credibility and decades of work in the working class, creating the space and the anti-political feeling that was later occupied by the 5-Star Movement.This situation produced a significant pushing back of class consciousness that is reflected in the scarcity of social conflicts, in the face of a dramatic situation, and in the growth of populist and right-wing forces.

Are there any signs of change in the foreseeable future?

If there is something we have learned in the last year, it is that changes, even the most unexpected ones, can occur suddenly or quickly. This also applies and will apply to political developments. That said, the fetid cocktail of unemployment, the absence of political and trade union forces able to show a way, class consciousness at an all-time low, means that this situation of relative social passivity could continue. Surely the class struggle will come back mighty and powerful in our country but it is likely that workers and ordinary people will still have to go through different experiences before starting to develop again a generically anti-capitalist consciousness. In other words, the situation is likely to get even worse before it improves again…

Thank you very much Giuliano. We wish you the best in your struggles