Iranian regime in crisis – workers fight back against neoliberalism and repression 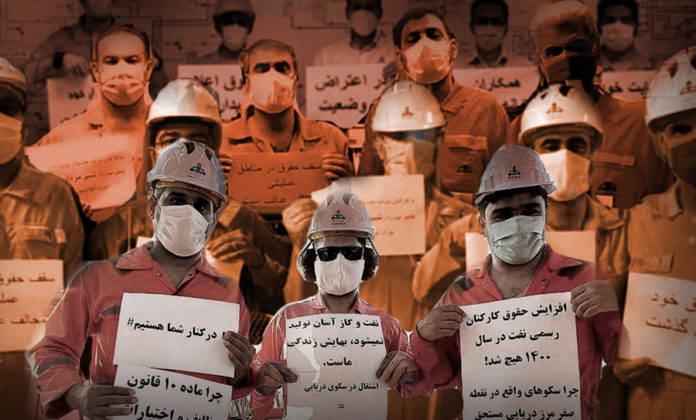 In Iran, for more than a month now, over 100,000 oil, gas and petrochemical contract workers in over 20 provinces are on strike and despite hundreds being sacked, the strike has spread to 115 facilities. We spoke with comrade Morad Shirin from the Iranian Revolutionary Marxists’ Tendency (IRMT) and an activist in the Shahrokh Zamani Action Campaign for the defence of workers’ rights in Iran. The interview was taken by comrades Andros Payiatsos of Xekinima and Athina Karyati of NEDA.

The regime’s only way to stop the looming economic collapse and further social explosions was to make a deal with US imperialism. The nuclear deal (JCPOA) with the imperialist powers, was signed in 2015 and implemented in 2016. Just five days after it was signed, and months before it was ratified by any parliament, Sigmar Gabriel, Angela Merkel’s deputy and Economy Minister, headed a delegation of German capitalists to Iran. In turn, Hassan Rohani went on a European tour in January which resulted in many more deals, including one for 118 Airbuses (worth €25bn). Many European and Asian delegations, and even American firms like General Motors, visited Iran and were set to expand ties.

In Britain, the Tory government appointed the infamous pro-Pinochet Norman Lamont as its trade envoy to Iran. Lamont said: “Iran is the world’s biggest emerging market since the collapse of the Soviet Union 25 years ago”. The capitalists on both sides were very happy.

But Iranian workers and the poor got nothing out of the improved trade relationship. Instead, they were subjected to yet more neoliberal attacks like cuts in subsidies, privatisations, changes in the labour law and the social insurance law, more temporary contracts (some on completely blank paper!) and so on. These came on top of the longstanding problems like low wages, job insecurity, hard conditions (with few health and safety measures) that have been there since the regime defeated the 1979 revolution.

A particular speciality of Iran’s capitalists under this regime is unpaid wages. These effectively break the contract between capital and labour, where the worker sells his labour power and doesn’t get paid! It is usually at least two or three months’ pay, but can easily be 12 or more months of unpaid wages. And it’s mostly not because small businesses are struggling to pay workers, but state-owned or other big companies, including many owned by the Pasdaran (the so-called Revolutionary Guards) who refuse to pay. Or recent privatisations, where relations of the regime’s leaders have bought the companies at a fraction of their true value!

Meanwhile, workers could see lots of imports of everything from Armagnac brandy to Zara garments, and most notably, luxury cars like Maserati and Porsche coming in.

There were therefore many protests for unpaid wages, where all that the workers demanded was their backpay. There were also strikes for pay rises (e.g., nurses) and against privatisation (e.g., lead and zinc miners).

The pre-JCPOA sanctions, together with the endemic corruption, mismanagement and the vast costs of the state’s repressive apparatus, had a devastating effect on the economy. Just taking unemployment we see that in July 2015 the official rate was 10.6 % (8.8% for men and 19.7% for women). Unemployment among people aged 15-24 was 25.2% (21.3 for men and 43.8 % for women). Of course, the official rate of any statistic always significantly underestimates the problem.

Then Trump unilaterally pulled the US out of the JCPOA in 2017 and applied new sanctions. Oil production fell below 227,000 barrels a month, the economy shrank by 4.9% in 2017-18 and manufacturing shrank massively (e.g., domestic appliances were at 25-30% capacity).

As ever, the way to control the crisis was to attack the working class. Today poverty is so widespread that the employed and pensioners make up 89% of the poor! The official figure for inflation is 47.6% but most people find the real cost of food a lot higher and they struggle to find the basics. The regime cruelly disregards the suffering of workers and the masses through its every policy (including the way it had dealt with the COVID pandemic). When people complained about the cost and shortage of chicken recently, Rohani advised them to eat fish!

Yes, there are over 100,000 oil, gas and petrochemical contract workers in over 20 provinces on strike. Despite hundreds being sacked, the strike has spread to 115 facilities.

Their demands include: higher wages, an increase in leave and holidays by 10 days, better health and safety conditions (especially with the outbreak of the pandemic).

Conditions are very harsh on the Gulf coast and many workers there are living far from their families. So, these are very modest demands and yet the regime is trying to divide them by offering a pay rise to the more skilled workers. But the official oil and gas workers are now threatening to join the strike!

Although the regime’s laws allow trade unions, in reality anyone setting one up – or trying to re-launch one that was smashed when this regime was established – is detained, interrogated, tortured, threatened (even their families!) and sentenced to long terms in jail (including many months in solitary). If they persist, then they’re killed.

This policy has resulted in many activists being identified by the regime and being jailed. Anyone who is released is constantly followed and their contacts are under surveillance. That’s why a lot of these would-be trade unions have been reduced to just issuing statements and appeals.

There are, however, increasingly many cases where most of the leaders of strikes and protests do not make themselves known. Clandestine committees are organising the struggles. This is the only way for the militant workers to organise in the future.

Just in the past year there have been many hundreds of strikes and struggles: from teachers, nurses, municipal workers, doctors and medical staff, to transport workers (bus, metro and train network), to the food industry and even different mines, heavy industry, oil and petrochemical workers and so on. Pensioners have also been holding regular protests on Sundays.

These are a reaction to the long-term dire economic situation, corruption, repression and sanctions, the incompetent and callous handling of the pandemic has led to even more stark social inequalities.

But despite this there have been important gains. The most important have been a series of strikes at the Haft Tappeh Sugar Cane complex. The Haft Tappeh workers have been on strike many times over the past few years. The latest began on July 13th 2021.

On November 8th 2018 Esmail Bakhshi, a representative of the Haft Tappeh workers, said that the workers had two options:

Therefore, workers’ control is a real and living demand in today’s workers’ movement and it has come out of the bitter experience of the past few years.

Unfortunately, there is very little or no co-ordination between industries because of the brutal repression. But the Haft Tappeh workers have co-ordinated some protests with others in Khuzestan province, particularly the Ahvaz Steel workers. This is obviously something the workers have to develop before they can mobilise a general strike like in 1978-79.

The standard response of this regime is to smash any movement, whether it’s a struggle by workers, students, women, national minorities or any other layer. And it doesn’t matter how modest or basic the demands, it can classify anything as “endangering the system” or “waging war against God” or a national security threat. Even protests asking the regime to act according its own constitution can result in detention and torture.

As the crisis of Iranian capitalism has deepened, the regime has returned to the more brutal methods before the relative relaxation of Khatami’s presidency (1997-2005).

For example, over 1500 people were killed following the protests against fuel subsidy cuts in November 2019. The regime used machine guns and helicopters on demonstrators. “Do whatever it takes to end it”. That’s what Khamenei said to his security forces.

Right now, there are protests against electricity and water shortages in several parts of the country. Their repression has been especially violent in Khuzestan province. Linking these protests and strikes will be a very important development.

Our comrades have always defended social movements and political prisoners in Iran. We had a committee against repression during the Shah’s reign and re-launched it when forced into exile.

In 2001 some labour activists in Iran asked us to set up a campaign specifically to defend workers’ struggles. Iranian Workers’ Solidarity Network (IWSN) became a very active campaign, holding pickets outside the regime’s embassies from Pakistan to Europe (including Greece) to Mexico. IWSN defended all struggles and activists, irrespective of their political views. It defended the Tehran Vahed bus drivers, the labour syndicalists arrested in Saghez, Haft Tappeh and many other strikes. It used many tactics, including collecting signatures from trade union leaders and activists in many countries, giving talks and passing motions in trade unions, as well as motions in the British parliament.

When the Iranian regime killed Shahrokh Zamani, a well-known labour activist, in Rajai Shahr prison in September 2015, we decided to change the name of the campaign in his honour.

The first step would be to send solidarity messages to the striking oil and petrochemical workers, as well as the Haft Tappeh strikers. A short statement signed by trade union leaders and activists would be a morale booster.

Other measures will depend on the labour movement and political structures in the country, as well as the general situation of the workers’ movement.

Although most of those who are striking at present are demanding better pay and conditions, Iranian capitalism does not have the capacity to give them their basic necessities. Inevitably the clash between capital and labour will become ever sharper.

Clearly a small section of the Iranian working class is already posing workers’ control as a real alternative to both privatisation and state control. This is a good starting point for posing revolutionary socialism as the alternative to both neoliberal and statist forms of capitalism. It is the main task of revolutionary Marxists to show the limits of syndicalism, which is a form of reformism, as being incapable of gaining anything more than temporary economic improvements.

The solution for the working class is to create clandestine cells made up of the vanguard of the proletariat, to encourage them to link the everyday struggles of the class through transitional demands (starting from the present level of consciousness) to the strategic aim of overthrowing the whole capitalism system (and not just reversing the neoliberal attacks).

Iranian Revolutionary Marxists’ Tendency is the only left-wing organisation advocating the creation of a vanguard party. Unlike all the others in the left, the IRMT believes that the vanguard workers have to be involved in building and leading their party – and right from the beginning.

To realise this perspective, the IRMT has been involved in activities with other vanguard workers (including Shahrokh Zamani) in Iran over the past 12 years. This close collaboration resulted in founding the Komiteh Eghdam Kargari (Workers’ Action Committee, a special united front), which is active today clandestinely in many workers’ centres.

The outcome of the next revolutionary situation in Iran depends on whether a genuine Leninist party of the proletarian vanguard can be created beforehand. Building clandestine action cells is the key method of achieving that goal.