Interview with Uraz Aydin: The situation in Turkey and the challenges for the Left 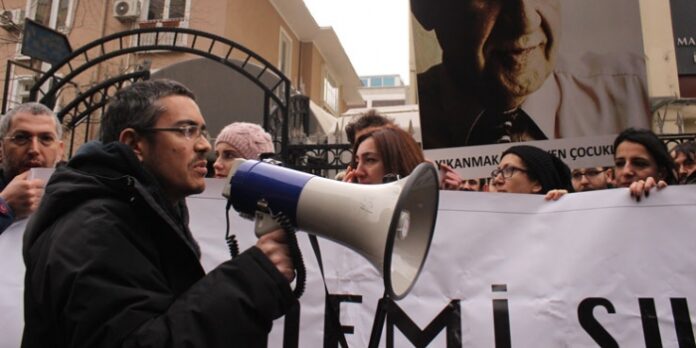 Q: Hi Uraz, let’s start this interview with the recent developments around the court decision condemning Istanbul’s mayor, Ekrem Imamoglu. What do you think this move by the Erdogan regime represents in the face of coming elections?

A: Indeed Imamoglu was sentenced to more than 2 years imprisonment for allegedly “insulting public officials”. This sentence has nothing to do with justice, it is very clearly political and aims at eliminating an important figure of the bourgeois opposition. We can remember what happened when Erdogan’s party lost the Istanbul mayoral elections in 2019. This municipality is a huge financial source. And Erdogan had the elections cancelled to prevent it from passing into the hands of the opposition after 25 years of Islamist administration. But Imamoglu won the second election with an even higher difference with Erdogan’s candidate. It should be noted, however, that the Kurdish vote in Istanbul was decisive for Imamoglu’s victory.

So Erdogan wants to eliminate Imamoglu as a potential candidate for the 2023 presidential elections, as he would have a strong chance of winning. Moreover, as his political mandate can be cancelled, he will no longer be the mayor of Istanbul and Erdogan will be able to appoint someone else in his place, which will mean that the mayor’s office will return to the hands of the government. This is what happened in dozens of towns in the Kurdish region, where the municipalities were run by the HDP. Obviously, the bourgeois (and nationalist) opposition was far from strongly condemning these attacks on the voters’ choices in these towns. Moreover, there is a second investigation against Imamoglu concerning the fact that he allegedly hired 1,600 people “linked to terrorist organisations”. If this investigation is successful there will probably also be a way to suspend Imamoglu from office.

Q: What was the response of the people against this?

A: There were of course big demonstrations at the Istanbul City Hall. All democratic and opposition forces condemned this attack against Imamoglu, but also against the will of millions of voters. However, from the very first day these protests were turned into the tribune of the bourgeois opposition, of the “Alliance of the Nation” which gathers parties of very diverse orientation: centre-left republican (CHP), splits of the extreme right (IYIP), Islamist (Saadet), conservative parties etc., which have detached themselves from the AKP. So nothing very exciting… On the other hand, this event has fuelled the crisis of the Alliance concerning the candidate to run against Erdogan for the presidential elections.

Q: The greek-turkish relations are very tense at this point of time. What do you think Erdogan’s agenda for the Aegean is?

A: We have already seen after the 2015 elections, whose outcome was that the AKP came out weakened, how Erdogan was able to open the doors of darkness. Bombings, pogroms, the war against the Kurds starting again etc… Erdogan never hesitates to provoke or instrumentalise international issues or crises so as to serve his internal political goals, like the Kurdish or the Syrian problems, the relationship with Libya etc. It is an element of agitation, of nationalist and military consolidation, which is also linked this time to a historical dispute (the delimitation of the maritime borders between the two countries,) but which is intertwined with the issue of energy resources, that will cause tensions for a long time. It is obviously difficult to predict but I think that, as long as it serves him, Erdogan will not hesitate to increase the tension. Otherwise, I’m not sure it will work in terms of its effects on nationalist consolidation, as much as before. But this kind of confrontational and militarised “diplomacy” also has its own dynamics, and caught up in a certain spiral of effect, reaction and backlash, you may not be able to ease the discord when you want to.

Q: How will a new CHP government, if elected, influence the greek-turkish conflict?

A: First of all we don’t know if a CHP member (Kilicdaroglu or Imamoglu) will be the opposition candidate. The other parties in the alliance are all right-wing. On the other hand, what all these parties share is a certain nationalism, more or less accentuated depending on the situation. They always end up behind the “reason of state”. So there is no reason to be optimistic in the long term. On the other hand, I doubt that the opposition, if it manages to win the elections, will want to inherit the international conflicts launched by Erdogan. There will probably be a desire (at least for a while) for “normalisation” with the neighbouring countries and the Western powers, especially given the economic crisis the country is going through.

Q: A few weeks ago, the Turkish army invaded the Syrian part of Kurdistan again. What do you think the purpose of this operation is?

A: The Turkish regime’s decision to bomb Kurdish areas in northern Syria and Iraq was far from a surprise. Air raids in northern Iraq, where the PKK’s military bases are located, had already been carried out in recent months. And the possibility of an air offensive on Northern Syria had also been announced by Erdogan several weeks before. But this latest offensive was presented as a reprisal for the bloody attack that took place on November 13 in the centre of Istanbul. Moreover, the information about this attack is full of contradictions and inconsistency and it is not excluded that some parts of the Turkish state are responsible, which, of course, would not surprise anyone.

But the aim is of course to make people think that the autonomous Kurdish region administered by the PKK in Northeast Syria is a permanent source of insecurity for Turkey. On the other hand, an element of propaganda used by the regime is that, if this region gets rid of the “terrorists” (PYD-PKK), it will be possible to “resettle” there some of the Syrian migrants whose presence in Turkey is seen as a real problem by the majority of the population (Turkish and Kurdish). One of the objectives of the recent approaching with Damascus, supported by Moscow, is precisely the elimination of this autonomous zone managed by the Kurdish movement (and which benefits from the support of Washington). But as I said, this kind of operation always has an internal objective, to promote a wave of patriotism that would allow a consolidation around the leader. But Erdogan has used this method too much and the attack attributed to the PKK and the offensive on Rojava are far from having provoked a nationalist mobilisation.

Q: There is now an open discussion about the possibility of banning HDP from running in the next elections. What are the prospects of the Left in the ballot box?

A: There is a high possibility that the HDP will be banned. Already now its bank accounts have been blocked, a few months before the elections! The Kurdish movement is familiar with its political parties being banned. So they are obviously prepared for this with an “alternative” party. The HDP and a large part of the radical left, including the Workers’ Party of Turkey (TIP) in which I am active, have joined in a third alliance called Labour and Freedom. This alliance will most likely be able to go well beyond the 7% threshold to enter parliament in the legislative elections. For the presidential elections, our objective is of course to make Erdogan lose. However, the opposition should take into account our alliance and especially the Kurdish movement which has the strength to influence the outcome of the presidential elections. So we think that they should propose a candidate who does not come from the extreme right, a candidate who would be acceptable for the Kurds and the left.

Q: TIP is experiencing a huge growth in members and influence. What are the challenges it will face in the coming period?

A: Yes, the TIP has indeed succeeded in capturing a dynamic of politicisation and radicalisation against Erdogan’s dictatorial power, impoverishment and the regime’s liberticidal policies. It is mainly the interventions of our four MPs in parliament (whose videos are massively shared on social networks) that have made it possible to make the party known and to generate this wave of recruitment. The party had less than 2,000 members at the beginning of 2021, while two years later, in January 2023, it has more than 11,000.

And following a long Youtube broadcast by one of our MPs, Barış Atay, in early January, where he patiently explained to a young audience, quite hostile to our ideas, what the left really is and what TIP wants, we are overwhelmed by an influx of new members. More than 7,500 people have applied to be party members in 6 days, and the number is counting. They represent a more proletarian and less urban profile, and their contact with the left has been much more limited than the party’s current base. This is an unprecedented phenomenon, posing a genuine challenge for the party.

But beyond the number of members, it is important, as you say, how influential our spokespersons are and that an exceptional interest for TIP is rising. There are mainly two sectors of the population among whom we gather real sympathy: those who distance themselves from the CHP, who find it too moderate and too passive and are attracted by the radical discourse of our elected representatives. A second category is made up of workers, regardless of their political orientation. Of course, this sympathy is important compared to the very limited influence of the radical left in general. As the party’s main spokesperson (the “President”) and parliamentary leader, Erkan Baş, says, “we are first among equals”. But we also need to stress that, since the Freedom and Solidarity Party (the ÖDP in which the Fourth International section was active at the time) in the late 1990s, this is the first time that there is a possibility of building a radical left mass party with a perspective of a revolutionary break with capitalism, which is a “useful” political tool for the class struggle.

Among the challenges we face are of course the elections, where we have to contribute to the overthrow of Erdogan. It is also important to continue to be represented in parliament, in order to be able to express the demands of the workers and oppressed during the bourgeois transition to a post-Erdogan regime, or worse, in the conditions of his re-election.

Another issue is related to the party’s base, a large part of which has never had any political affiliation before (at an organisational level), so it is crucial to educate them politically, in order to forge not only the militant base, but also the cadres who must take on responsibilities in the apparatus.

And finally a last issue, in the longer term, is the need to develop our units, our sections in the workplaces, in factories, schools, shipyards, town halls, warehouses, hospitals, supermarkets… There is a great potential for TIP and we must seize this opportunity. We have made an encouraging start but we must succeed in sinking deeper roots wherever the working class breathes, wherever the class struggle is waged daily.