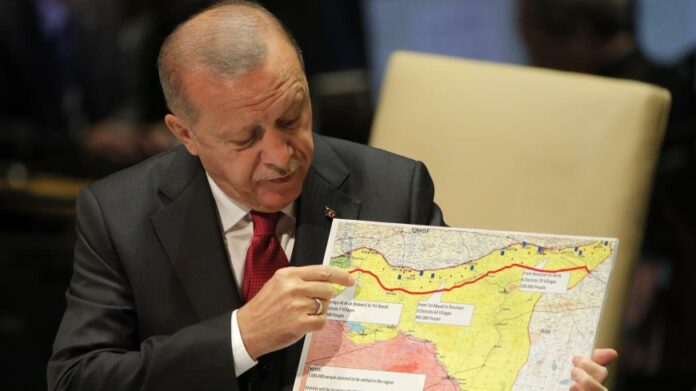 The Erdogan regime seems to be discussing a new military operation in northern Syria, although they have not yet received the green light from the US and Russia. Erdogan has also signaled that he is willing to ease up his relations with the Syrian regime. His government needs a victory and the clock is ticking against him.

With the economic crisis, inflation and unemployment on the one side and corruption scandals being daily uncovered on the other, discontent with the regime is growing. In particular, because the regime cannot find a solution to cover the country’s needs for foreign currencies and thus to the devaluation of the Turkish lira. Since there are only nine months left until the elections, it is a race against time for Erdoğan, who under the circumstances is unlikely to win. Therefore, he is trying to find ways to overcome this bad situation. One of them might be a big military strike against Rojava in northern Syria. But things are not that simple for him.

Since the last months of 2021, Erdoğan has been trying to launch a large-scale military operation in northern Syria. Although he temporarily shelved this plan last year, since the big imperialist players in the region did not approve of it, this year he has again expressed his intention to carry it out, in conjunction with the ongoing military operation against the PKK in northern Iraq. The Erdogan regime wants to create a “buffer zone” not only in Syria but also in Iraq, stretching over 30 km in the south of Turkey, from the west to the eastern Iranian border. This simply means that Rojava, the de facto autonomous region in Syria controlled by Kurdish forces, will come under Turkish control and the autonomous structure there will be abolished. Such a “success” would indeed give a huge boost to Erdogan’s election campaign, despite all the other negative developments in the country. The reason is that the anti-Kurdish nationalist policy of the Turkish state is the common position of all parties in the country, with the exception of HDP the revolutionary socialist forces.

The sword of Damocles hanging over the Kurds

After the outbreak of protests against the Assad dictatorship in Syria in 2011, Turkey took advantage of the situation to intervene immediately and exert strong influence on the Syrian opposition. It presented itself as their protector, organised conferences for them in cities like Istanbul and Antalya, etc. Both the Syrian National Council and the Free Syrian Army (FSA, now the Syrian National Army) were founded in Turkey.

Erdogan dreamed of soon being able to perform Friday prayers in the Umayyad Mosque in Damascus. However, with the failure of the attempts to topple the Assad regime, the Turkish strategy also failed. Consequently Turkey, despite being a NATO country, developed close relations with Russia in order to have a role in the Syrian war. It even bought the S400 surface-to-air defence missile system from Russia.

The most important factor behind Turkey’s rapprochement with Russia, although Russia is the protector of the Assad regime, was that the Syrian Kurds have become an important ally for the US in the area. In 2014, Rojava’s defence of Kobanê against the Islamic State created a new momentum. Since then, all the players in the region (the US, Russia and the Assad regime) have kept Turkey as a sword of Damocles hanging over the Kurds. The US wants them as an existing force that is not controlled by its adversaries, but does not want them to become independent. Russia is trying to push them towards the Assad regime. The Assad regime, on the other hand, demands that the autonomous structure of Rojava, especially the autonomous defence forces, be dissolved and that the Kurds submit to its rule with some minor improvements of their status inside Syria.

The seesaw between the USA and Russia

After failing to get the green light for the operation last year, Erdogan again planned an invasion into Syria to take advantage of the situation that had arisen after Russia’s invasion of Ukraine. Here too, Erdoğan continued to pursue a policy of “back and forth” between the USA-led NATO and Russia. On the one hand, he sells armed drones to Ukraine and gives the appearance of increasing his commitment as a NATO member. On the other hand, he improves his relations with Russia by, for example, not participating in the sanctions against Russia and signing new trade deals.

Both the US and Russia have turned a blind eye to Turkish aggression in Syria, even though they have not given Erdogan the green light for a new invasion. For months, Turkey has been carrying out intensive attacks on Kurdish areas in Syria (as well as in Iraq) with warplanes, artillery, drones and also through supporting jihadist groups. Many civilians have already been killed in these attacks. According to figures given by Kurdish forces, 50 children were killed in August alone.

But Erdogan, who is in a tight spot at home, needs a major offensive that could get him a viable chance for an election victory.

A major concession by Erdogan

Turkey’s Syrian policy has had three crucial motivations from the start: to become a more important local imperialist power by toppling the Assad regime, to prevent any kind of gains by the Kurds and finally, to strengthen its power at home by whipping up nationalism.

In mid-August, Erdoğan stated for the first time since the start of the Syrian war that he wanted to improve relations with the Syrian regime. It was even claimed that Erdoğan and Assad would meet, although this committment was later withdrawn. This new situation is further proof of how much pressure the Erdogan regime has come under. Of course, this does not at all mean that Erdoğan has abandoned his aggressive imperialist policy. It only means that Erdogan is stuck domestically  and the clock is ticking against him.

Although Erdogan constantly threatens that he can “come down suddenly one night”, a major military operation seems unlikely. Maybe Russia will give the green light for a limited operation in return for trade-offs, but that does not seem to be enough to save Erdogan at home. In any case, workers, unions, the youth, the movements, etc in Turkey and the whole region must fight against any war threats that will plunge the region further into conflict.