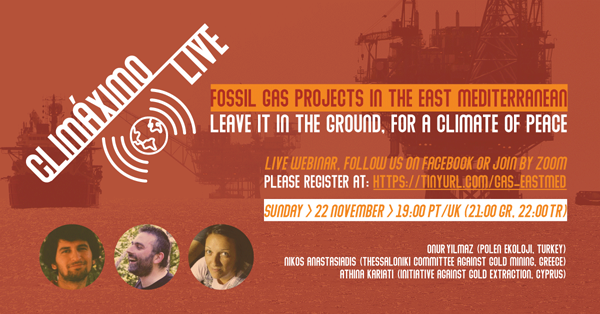 While fossil gas must be left in the ground, military tensions between Greece and Turkey escalate, risking a conflict over fossil gas reserves that cannot be exploited if we want to remain in on a liveable planet.

With their eyes on offshore fossil gas reserves in disputed sea territories, the Greek and Turkish states entered into open conflict when two military ships collided to the east of Crete.

Besides from the risk of a war, there is also the risk of opening a new fossil fuel reserve, which will represent the equivalent of the greenhouse gas emissions of France and Spain combined. In fact, according to climate science, the existing reserves must be shut down, and launching new extractive operations should not even be on the table.

We must mobilize internationally for a just energy transition and refuse policies that lead us to mutual destruction. Climáximo invites activists from Cyprus, Greece and Turkey so we can learn more about the project itself, as well as about the recently launched civil society campaign against it.