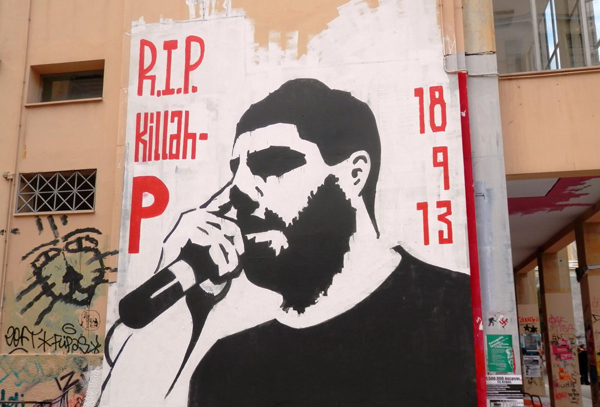 We publish below the announcement of the initiative Grec.que.s solidaires de Belgique (Greeks in solidarity – Belgium) about the actions that will be organized around the “Antifascist September”. You can contact their facebook page for more information.

The campaign “They are not innocent” and the Greek Anti-Fascist Coordination are calling for an anti-fascist month in September. This campaign will start on the 8th anniversary of the murder of the worker and rap singer Pavlos Fyssas, on 18 September, and will end on 7 October, the 1st anniversary of the conviction of Golden Dawn as a criminal organisation -which led to incarcerating the leaders of the Nazi group.

Despite the magnificent victory of 7 October 2021, there are many signs that we are not done with the far right and fascism, nor with their so-called “democratic” institutional cover. We have seen the by-passes and administrative tricks used to delay the arrest of Yannis Lagos and Christos Pappas. We have seen the extreme right-wing and fascist elements reemerge, be it with Kasidiaris’ leaflets (former GD leader now imprisoned) or the ‘anti-vax rallies’, where pro-dictatorship and fascist slogans proliferated. We have recently witnessed extreme racist speech against the new refugee flow from Afghanistan, but also racist, fascist and violent acts during the events organised around the Amal project.

And on top of all this, the Prime Minister chose to attribute the Ministry of Health to the anti-Semitic pro-Nazi Thanos Plevris, the defense lawyer of the policemen who beat to death activist Zak/Zackie Oh!

On each occasion, the response of the anti-fascist movement has been timely and strong. We will not let fascism reappear. The fight against fascism is a marathon and the events around the anti-fascist September campaign are only one stop on that way.

That’s why we will also contribute to the organisation of events during this anti-fascist month:

We know very well that the only way to confront the fascists and end fascism is through street action. We know that the capitalist system nurtures them and uses them to divide and demoralize poor and oppressed workers.

Solidarity with Greek anti-fascists from Belgium!