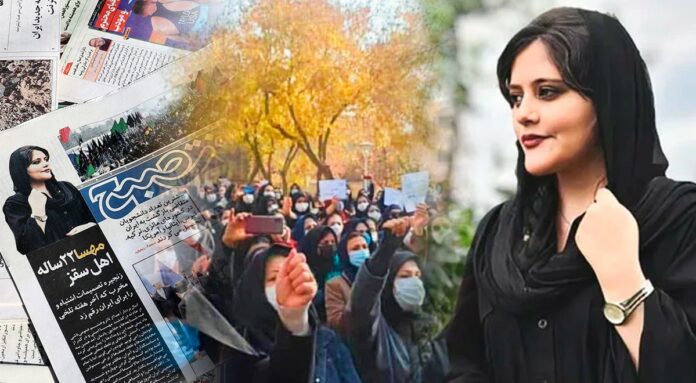 Protests have broken out in Iran after a young woman died following her detention by the “morality police”. Mahsa Amini fell into a coma while in custody in Tehran after being arrested by officers enforcing the country’s strict hijab rules. Police said the 22-year-old was taken to hospital after she allegedly had a heart attack. Pro-reform news websites quoted an uncle of Ms Amini saying she had no history of heart disease.

With the expansion and continuation of street demonstrations in response to the murder of Mahsa Amini, the issue of overthrowing the regime has been promoted by various parts of the right wing opposition, such as Reza Pahlavi (son of toppled Shah of Iran 1979). These forces in exile have expressed their long-standing wishes for the government to preserve the capitalist state with a pro-Western regime (just like the previous regime of the Shah). These CIA inspired forces plan to return to Iran and continue the capitalist state rule with new decorations.

International imperialism still wants to revive the Joint Comprehensive Plan of Action ( JCPOA(, while continuing to demand more concessions from the regime. It is clear for Iranian workers that for imperialist countries, protecting human rights and fighting against tyranny and suffocation, etc. is secondary to their economic interests. In fact, the crocodile tears by the imperialist countries for the killing of Mehsa Amini and the killing of our youth (10 people so far) in the streets of Iran, is expressed only with the aim of pressuring the Iranian regime to open up the country for investment of international companies. They want to take advantage of opening the market and of the cheap labour force in Iran, while having direct access to Iran’s oil resources.  Imperialism in the last two centuries clearly showed that it has no interest in helping people of any country.

It is obvious that the street protests of young people in Iran are remarkable and praiseworthy. Especially the struggle of those young women against the reactionary policies of compulsory hijab. The selflessness of the youth who, with their bare hands, confront the mercenaries of the regime in the streets of Iran is commendable and showing their awareness. The lessons of January 2016 and November 2018 revolts have been used in the recent demonstrations by our young fighters in the streets.

As revolutionary Marxists, we have always believed that the overthrow of the regime (the central government) must be accompanied by the overthrow of the capitalist state. We don’t want just a “regime change”. We do not want to overthrow the regime of the Islamic Republic and replace it with a regime affiliated with the CIA and the American government. We want to overthrow the capitalist system, along with the regime of the Islamic Republic. The working class and toilers of Iran will not benefit from the overthrow of this regime and its replacement by Reza Pahlavi and the Iranian social democrats. Our future revolution will be a socialist revolution based on the majority of the people led by elected workers’ councils. It is with the creating workers’ government that the basic tasks of society such as democracy, freedom and complete liberation of women, oppressed nationalities and the growth of the economic system will be found.

This article by Maziar Razi was translated from Farsi, and is part of a statement to the youth and workers in Iran. You can read the whole statement in Farsi here