10 years from “Occupy Nigeria” – when the masses “stormed heaven”. Lessons for today 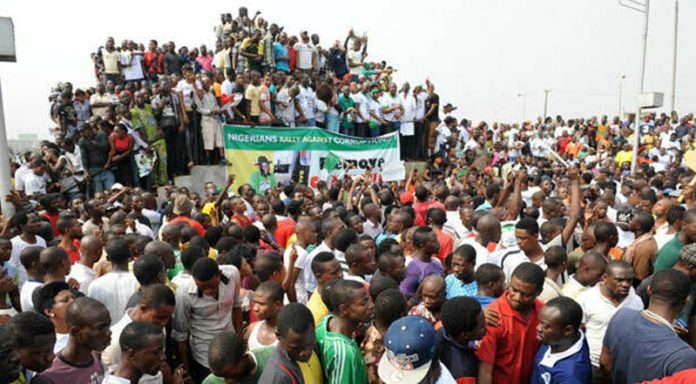 Millions of Nigerians woke up on January 1, 2012 to the shocking news that the Goodluck Ebele Jonathan (GEJ) administration had increased fuel pump price to more than double, from 65 to 140 Naira (Nigerian currency, exchanged at around 420 N per US dollar at present official rate). Protests broke out immediately in many parts of Nigeria.

The Joint Action Front (JAF) led about four thousand people on the streets of Lagos to reject this new year bad “gift”. The pressure of the popular masses forced the Trade Union centers to call immediate mass protests and an “indefinite” general strike that lasted for 8 days. This was the biggest revolt since the protests about the annulment of the 1993 general elections by General Babangida.

The events revealed the weakness of the ruling class and showed that it had no real social basis and support. The regime was shocked to its foundations. Nigerians took to the streets to reject this new year bad gift from an elected government that proved to be completely hypocritical: the president had openly stated during the election campaign in 2011, only months before, that he had no shoes when he was young because he came from a poor and humble background, only to get the votes of the poor.

These events were taking place at the period of the “Arab Spring” of 2011. There were mass uprisings going on in Tunisia, Egypt, Syria, Libya. These events contributed to the “Occupy Nigeria” of January 2012.

Power on the streets – 8 days that shook Nigeria

After January 1st 2012, everything changed in Nigeria.

The Nigerian Labour Congress (NLC) and the Trade Union Congress called a general strike on Monday 9 which lasted until January 16th. Angry protests spread across Nigeria. The power of the people was revealed. The working masses demonstrated and fought as one, putting tribalism and regionalism aside. No force seemed capable of dividing them. Millions came out in anguish and pain, filling towns and villages while occupations took place in all major cities, with one slogan: N65 or nothing.

The strike was very successful, communities engaged in self-security and voluntary pickets to enforce the strike peacefully. Both the formal and informal economy were shut down, from airports to seaports, from roads to railways. Each and every one of the eight days of general strike witnessed mass rallies and community protests. There was a high level of discipline, class consciousness and solidarity throughout these 8 days.

This historic mass action against the bad new year gift from the Federal Government was well organized with action committees in major cities with the support of labour, artisans and professional bodies.

About fifteen lives were lost and scores of protesters were injured.

During this period the terrorists stopped bombing, armed robbers stopped robbing people and kidnappers stopped kidnapping. The Federal Government had sponsored thugs to disperse the protests and break the strike apart from the attacks by the official “security forces”. They made attempts to use ethnicity, and regionalism to divide the movement and stop the protests. The federal government also resuscitated the Niger Delta militants (militant secessionist groups on the Niger Delta of Nigeria). Hundreds of millions were spent on anti-protesters adverts. But none of these was able to break the strike.

The result was a partial victory. The price was reduced from N140 that was initially announced to N97. Of course, the victory could have been complete, if the Unions leaders had not suspended the mass protests and strike.

Up until now the Buhari regime has increased fuel price twice. Now they want to implement another price hike, from around N165 to N302 per litre by February, as is “recommended” by the Economic Council, led by vice president Osinbajo

The first time fuel prices were increased by this government was in May 2016 when the general strike and resistance was too weak to force the government back. 2016 was the year that Buhari came to power, using “Change” as a central slogan, forming a populist government and creating the impression of being friendly to the people. After that the regime again survived another mass protest with a general strike in September, 2020. Once again, the Trade Union centers failed to lead the masses of Nigeria into determined struggle and victory, to reject the fuel and electricity increment.

Under the pressure that the regime faced, it gave empty promises: “Fixing the existing refineries, entrusting them to efficient managements, creating and enabling environment for new refineries, and doing all positive things that would ensure enhanced and sustainable local refining capacity”. Practically nothing has been done and none of the above is in existence.

The regime has one year to go but nothing has changed since Buhari came to power. In fact, there are confirmed reports of mismanagement of money and corruption in the NNPC (Nigeria National Petroleum Corporation).

After the suspension of the General Strike and the mass protests against the increment of fuel pump prices in September 2020, there has been a big youth revolt against police brutality in October 2020. This lasted 14 days and faced heavy repression by the state.

This again registered the determination of the Nigerian people to fight against pro-rich, anti-poor policies and state repression. But unfortunately, no clear-headed leadership and no political alternative were presented to the masses of working people and the youth.

Faced with the new price hike on fuel the Nigerian workers and youth should remember their most militant traditions and struggles.

Things have been moving from bad to worse for ordinary people. This same regime is now proposing another removal of fuel subsidy as dictated by the World Bank and the IMF.

In December last year the IMF and the World Bank advised Nigeria to remove the subsidy on petroleum. The World Bank and IMF again, on January 11 of this year, called on the Nigerian government to devalue the currency further, raise interest rates and remove subsidies on petroleum!

Crude oil is a strategic national commodity and represents a sector of crucial importance for the economy of Nigeria. The policies applied in relation to this key sector of the economy by the present but also all previous governments have always been –and will always be as long as the capitalist system prevails– anti-poor, pro-rich.

Despite the social, economic, political and ethno-religious crisis prevailing at the moment in Nigeria, the decision of the Federal Government to remove the subsidy on fuel will spell doom. The present and previous governments have been removing subsidies repeatedly for over two decades now, very often making populist and false promises.

For instance, the Minister of Finance, Zainab Ahmed, said that the Federal government would remove the subsidy on petroleum but provide N5000 to support transport costs for poor people, so as to reduce the effect of the petroleum price hike. This was also the method the past regime used in 2012 – after increasing the petroleum price the government introduced the Subsidy Readjustment Program (SUREP) but this program didn’t end mass suffering among Nigerians. The January 2012 “Occupy Nigeria” is one of the reasons that led to the crumbling of the ruling party in the 2015 general elections after it had ruled for sixteen years.

To the ruling class exploiters and oppressors as well as their lackeys, the failure to have a functional refinery industry in Nigeria, a country with such huge reserves in crude oil, should be seen as a tragedy and a crime against the people. The government keeps public refineries inactive, shamelessly looking for alternative refineries from the private sector, from individuals like Dangote who is the richest man in Africa, only because they are immersed in corruption, providing profits for the super-rich who are looting the country and will offer back a little share of the spoils.

After a sober analysis of the Nigerian economy and the ever-plummeting standard of living of the poor masses, we should be clear that the only way this pervasive rot that has taken over the soul of the country can be ended is to form a government in the service of the working class, the poor peasants, the youth and the unemployed – a socialist government.

There’s no basis for the suffering of the poor masses in a country that makes billions of dollars from crude oil yearly, a country that’s stupendously rich both in human and natural resources. All of this wealth however, goes into the pockets of the super-rich, and is used to pay for fictitious and odious debts.

As we write, the crisis of Nigeria in the last ten years, to the mass uprising of January 2021 and to today, still remains the same.

The majority of ordinary Nigerians have no access to food, education, healthcare, employment, shelter. The Buhari regime is an extension of the GEJ regime, a regime that applies anti-poor, pro-rich policies, deregulation, privatization and commercialization of the commanding heights of the economy coupled with a treacherous looting of nation’s wealth.

A socialist alternative against deregulation and commercialization

Capitalism and the neoliberal policies that are applied, are responsible for the mass misery in Nigeria.

The Trade Union centers have promised to fight against the fuel subsidy removal with mass protests on January 27 and February 2. The Revolutionary Socialist Movement (RSM) has called on Trade Union leaderships to back up the protests with a two-day general strike, to send a strong signal to the ruling class and their cohorts that neo liberalism and anti-poor policies will not be allowed.

Only by such determined and militant actions can we force the government back.

SPN remains the only electoral political alternative for the people in the coming period. RSM will continue to work within the SPN and also canvas for the new initiative by other left activists who formed The People’s Political Alternative Movement. This initiative is to provide a broader alternative platform for trade union activists, socialists and ordinary people.

In whichever way possible, RSM will strongly participate in all possible movements to build a mass movement aiming to reject all capitalist policies and fight for a socialist government and for the socialist transformation of Nigeria, that will put the needs of the people before profit and end mass misery among Nigerians.

The only way to successfully fight these policies in Nigeria today is to adopt a full and comprehensive anti-capitalist, socialist economic and political program. Not until we are able to achieve a socialist revolution  to reconstruct Nigeria, mass misery and unemployment will continue and the oil giants together with their lackies will continue to live in luxury from the huge profits that the system allows them to make out of our labor and the exploitation of the resources of the country.

A socialist government based on the support of ordinary working-class people will not only pledge to re-nationalise privatised enterprises in the key sectors of the economy and social services, but will also advocate nationalisation of the entire oil sector, power sector and financial institutions, under the management and control of elected representatives of the working class and the poor masses. This will go along with ending massive corruption in governance and mismanagement which is the new order in the public and private sector in Nigeria today.

Τhe article has been published in a number of national media in Nigeria: