US: Kellogg’s threatens to sack 1,400 workers being on strike since October 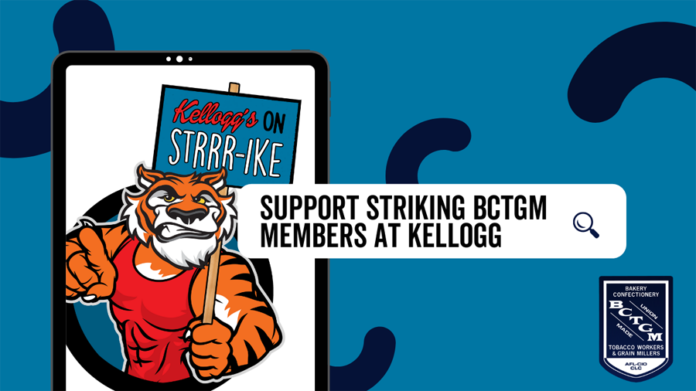 An important strike has been happening in recent months at the Kellogg’s cereal manufacturers’ factories in the US. The strike is taking place in a period where there is a significant nation-wide increase in strike activity.

The strike, involving 1,400 workers, is organised by the BCTGM Union (Bakery, Confectionery, Tobacco Workers and Grain Millers’ International). It started on October 5th, and is about signing a new collective bargaining agreement between the union and the employer.

From the very beginning, the strike spread to all four of the company’s plants in the country (in the states of Michigan, Nebraska, Tennessee and Pennsylvania). It’s the first time since 1972 that the plant in Battle Creek, Michigan has been on strike – and this is where the company’s headquarters are located; the plant in Lancaster, Pennsylvania, was last time on strike in 1985.

The workers are fighting for a number of issues including wage increases, overtime pay, their pension plan, the number of paid leave days, etc.

But their most important demand is to end the two-tier wage and benefits system separating workers into “new” (those hired since 2015) and older “legacy” union employees.

The previous collective bargaining agreement provided that up to 30% of workers could be called “transitional”; these workers would be paid considerably less than the rest and enjoy fewer benefits (health, pension rights, etc.).

The company’s intention is that the 30% threshold be removed in the new collective agreement. This is an attempt to gradually replace “legacy” workers with new ones, so that the latter would become the majority. That would translate into a dramatic increase in profits for the employer because of huge savings in wages and benefits. Furthermore, the company is threatening to relocate part of the production to Mexico if these demands are not met.

This shows the company’s real attitude towards its workers. A year ago during the pandemic they were saluted as “heroes” who worked continuous overtime every day to meet the increased demand. According to whatv Trevor Biedelman, president of the union’s Battle Creek branch and a fourth-generation worker at Kellogg’s plant in the city, told the Guardian:

“This is after just one year ago, we were hailed as heroes, as we worked through the pandemic, seven days a week, 16 hours a day. Now apparently, we are no longer heroes. Very quickly you can go from hero to zero. We don’t have weekends, really. We just work seven days a week, sometimes 100 to 130 days in a row. For 28 days the machines run then rest three days for cleaning. They don’t even treat us as well as they do their machinery.”

Not the first time the company attacks

The previous collective bargaining agreement between the union and the employer expired in October 2021, and the two sides had already been in negotiations for more than a year.

In the previous years, the employer unleashed mass layoffs (nearly 200) of unionized workers. In 2013 and 2014, they staged successive lockouts (i.e. shut down the plant to blackmail workers) at its Memphis, Tennessee plant.

In September 2021, one month before the strike started, the company announced another 212 upcoming layoffs at its main plant in Battle Creek; the majority of those to be laid off are also union members.

On December 2, Kellogg’s management and the BCTGM union leadership announced a tentative agreement for a five-year contract that would increase wages by 3% for long-term workers and by smaller amounts for workers with lower seniority. However, the contract would also maintain the two-tier wage system favored by the management – the abolition of which was the union’s primary objective when launching the strike.

Union members overwhelmingly rejected the tentative agreement in a vote on December 5.

Todd Manusos, a material transfer operator at the Battle Creek plant, said to the NPR:

“For all the reasons that we went out on strike, none of it was addressed. We went out to fix this equality problem. And the tentative agreement did not speak to that at all”.

After the vote, on December 7, Kellogg’s management announced the replacement of all 1,400 striking workers.

In the following days, social media stormed with messages of solidarity with the strikers; the most notable action was when thousands of Reddit users attempted to flood the Kellogg’s site with fake job applications in order to block the hiring process.

The increasing solidarity toward the strikers even forced US President Joe Biden to take a public stance against the company’s plans to fire all unionized workers.

At the time of writing, the strike is still on. The workers are now fighting not only for a collective agreement but also against the employer’s attempt to massive lay-offs. On December 17th the company announced that it has reached another tentative agreement with the negotiators of the union. The question now is if the workers will vote in favor of the agreement and what concessions did the company make.

Their determination and perseverance should be an inspiration for all workers internationally. Regardless of the outcome of this battle, it is certain that we are entering a new period in the United States where the bosses and the capitalist class can no longer sleep as soundly as before. What is happening in the Kellogg’s factories is the music of the future, as sections of the US working class begin to rediscover the ideas of struggle and solidarity.