UK: The Enough is Enough campaign, the Left and the Unions 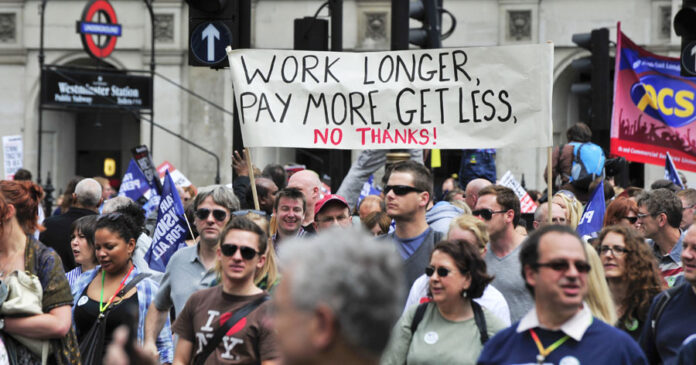 Enough is Enough is a new formation set up in the UK over the last few months as a response to the growing cost of living and energy crisis. It is made up of a number of organisations: CWU (Communications Union), RMT (Rail and Transport Union), Acorn (Housing Campaign), Tribune (A left of centre magazine), Fans Supporting Foodbanks (A football-based charity) and two Labour MPs – Zarah Zultana and Ian Byrne. It is also backed by the Green Party. Local trades councils activist groups and union branches are also getting behind this initiative – notably Huddersfield TUC, who are organising a rally as part of the first phase of action.

The campaign, which started in August, has already attracted the support of over 500,000 followers on its website. It has hosted a series of public rallies and plans to host more in the near future. There have been rallies in: London, Manchester, Glasgow, Leeds and Huddersfield. Rallies for Luton, Liverpool and Birmingham are planned for later this month. The rallies have attracted capacity audiences, but unfortunately hundreds of attendees have been unable to enter the halls being used, as they have invariably been filled to capacity with pre-booked audiences. There are plans for a day of nation-wide demonstrations on October 1st, which are due to happen in most large UK cities. Further demonstrations are being planned to take place in smaller towns.

The action to follow these rallies and demonstrations includes forming community groups, organising picket line solidarity and taking action against the companies and individuals profiting from this crisis. One of the Enough is Enough taglines is: “Enough is enough. It’s time to turn anger into action.” This organisation is attempting to mobilise across communities and bring trades unionists and other citizens into the struggle against austerity – in fact anyone who feels aggrieved at the horrible inequality and unfairness of the current economic pressure that is being placed on ordinary people by the current system. On its website Enough is Enough says, “We can’t rely on the establishment to solve our problems. It’s up to us in every workplace and every community. So, if you’re struggling to get by and your wages don’t cover the bills, if you’re fed up working harder for less and you’re worried about the future, or if you just can’t stand to see what’s happening to our country – join us.”

Enough is Enough has been able to win the support of prominent trades unionists and politicians and also prominent activists, especially from housing and food security campaigns. It is unfortunate however that support for Enough is Enough is not stronger from the major unions, such as UNITE, UNISON, GMB and PCS. These are unions all entering into struggle and it would seem obvious that they should join with unions already at the forefront of the struggle (RMT and CWU) in order to build the movement into a major force. At the We Demand Better rally in June this year, Mark Serwotka (general secretary of PCS – civil service union) was calling for unity across the trade union movement. One wonders why the PCS has not visibly supported this initiative. Sharon Graham (general secretary of UNITE) has also not got her union behind this initiative. Is this because it cuts across the People’s Assembly, which has been attempting a re-launch recently?

The tag-line Enough is Enough is a powerful one and it appears to have captured a section of the public’s imagination. In the context of increasing poverty, rising fuel bills, and a wave of industrial action building in both the public and private sector, the time seems right to join up the dots and connect these struggles both industrially and politically. It doesn’t really matter who originated the movement, surely workers and trade union leaders can get on board and support one another. The ruling class has no difficulty in acting in unity. Witness the charade around Queen Elizabeth’s death, where the state was fully coordinated in its strategy of indoctrinating the British people into a frenzy of parsimonious grieving – with some success. As has been the case during the Covid crisis, Labour has backed the Tory government to the hilt throughout. Following the Queen’s death very few prominent Labour figures have been prepared to point out the absurdity of a party built out of the trade union movement supporting the concept of monarchy. In fact, Keir Starmer had instructed his MPs to only make comments in support of the royal family during the absurdly protracted period of mourning.

Enough is Enough is the latest in a string of disparate attempts to build an opposition to the attacks being made on ordinary people by the British state. Some of these attempts at opposition were built during the climate struggles (XR) and out of the Black Lives Matter movement but have unfortunately lost some momentum. Others, such as, TUSC (Trades Unionist and Socialist Coalition) and People’s Assembly emerged from the anti-austerity movement. None of the above has been able to capture the support of a significant mass of ordinary people and turn that into a decisive break-though. It also seems odd that We Won’t Pay (a movement against paying energy bills) has not got behind Enough is Enough as of yet. Is this another sign that the Left is failing to coordinate and that this latest effort will go the same way as its predecessors?

It is early days for Enough is Enough and it takes time to build a movement in unity. It seems possible that some of the above-mentioned groups and others could coordinate with Enough is Enough fully, or as part of a federation of activist groups. SOS / NHS for example has broadened out its base of support and at its national rally in November could commit to working along with Enough is Enough and attempt to bring the health unions on board. One thing is clear; Enough is Enough cannot become a front for the Labour Party, shielding it from criticism as the People’s Assembly did. It is fine to have Labour Party speakers at rallies alongside activists and trades unionists as long as they are part of the struggle but Enough is Enough will fail if it tries to conceal the anti-working-class character of the Labour Party under the current leadership of Sir Keir Starmer. Workers, students and youth have been burned out by movements emerging out of the Labour Party and trade union movement in the past because of their lack of a critique of Labour or an attempt to build an anti-capitalist alternative. This could be said of the Peoples’ Assembly and Momentum for example.

Is Enough is Enough prepared to organise a democratic structure in which the rank and file can meaningfully be engaged in decision-making, or will it be a top-down formation? Is it willing to put its programme under discussion inside the movement so it can reflect the radical changes that are needed in today’s situation?

Would Enough is Enough be prepared to consider an alternative at the ballot box to the current Labour Party? Jeremy Corbyn will not be allowed to stand for Labour at the next election. Is this the right time for disaffected Labour MPs and activists to get on-board with a new party built out of the trade union movement? This seems an unlikely scenario and so far there is no suggestion that Enough is Enough is likely to head in this direction.

At the Huddersfield rally Ian Hodson, President of BFAWU (Bakers union) did say that if Labour were to continue to block the movement it, “should get out of the way and let’s have a new party.” This comment was met with loud applause but other speakers tended to rail against the Tory government and ignore how complicit Labour has been in creating the current situation in the country by ousting Corbyn as brutally as they did and backing establishment positions ever since.

However, as we enter a period of industrial turmoil and increasing economic hardship, momentum could build behind Enough is Enough. Let’s hope that the Left can build bridges and work in a coordinated way and push for a radical alternative. The trades unions must do this if they are to win the demands that Enough is Enough is making as well as their own demands on pay and jobs.