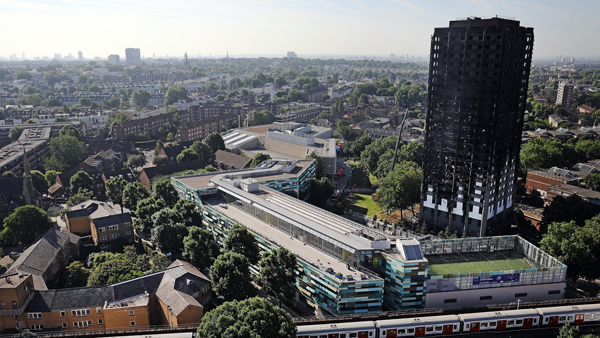 Four years after the fire that broke out on June 14, 2017, in London’s 24-storey Grenfell Tower and claimed the lives of 72 people, attention is beginning to turn to the political context of this tragedy.

The investigation, which was launched to examine the circumstances that led to the Grenfell building fire, is coming to reveal new facts. According to the evidence presented, this tragedy was the result of a long-standing government cover-up regarding the safety of materials used by manufacturers.

The day after the fire, the then Prime Minister Theresa May ordered a public inquiry to be held to establish exactly what happened at Grenfell Tower in order to take steps to prevent another similar tragedy.

The inquiry was divided into two phases. The first phase focused on examining the events of the fire and was completed in December 2018. The conclusion of the first phase was that the main reason the flames spread to the exterior of the tower with such speed was due to the flammable insulation panels acting as a source of fuel for the fire.

The second phase is looking at why such combustible materials were placed in the high-rise tower in the first place and therefore contributed to the spread of the fire. Specifically, the section of this phase deals with building regulations and fire safety guidelines, including a detailed examination of government policy that has been implemented in this area.

It is true that the Phase 2 inquiry is moving into an in-depth examination, highlighting the criminal practices followed by previous governments of the day which resulted in other tragedies that preceded the Grenfell Tower fire.

The Department for Levelling Up, Housing & Communities said after the revelations that it “is deeply sorry for its past failures in relation to the oversight of the system that regulated safety in the construction and refurbishment of high-rise buildings” that helped create “an environment in which such a tragedy was possible”. At the same time, however, the Department is exclusively blaming construction companies and building inspectors for “abusing the trust” placed in them.

In other words, the government, in its attempt to deflect all blame, points to the construction companies as the main culprits, while the government’s only failure was in providing “excessive trust” to them.

The construction companies and the sub-contractors who built and installed these materials obviously have a huge responsibility and should be severely punished. But it is also obvious that the governments of the day encouraged or allowed the practices followed by these builders and contractors.

In fact, the history of the problematic practices that led to the Grenfell Tower fire goes back at least 30 years, from the Knowsley Heights apartment block fire in Huyton (located near Liverpool) in 1991.

This block of flats was selected in 1989 by the then government to pilot the “Estate Action” programme, which aimed to refurbish old buildings. In this renovation, insulation was installed in the front of the building using materials considered to be fire resistant. The Building Research Establishment (BRE), a research laboratory, was responsible for monitoring the renovation.

Once the project was completed in 1991, the BRE report stated that the methods used at Knowsley Heights could be “readily adapted to other multi-storey dwellings”.

But the fire that broke out shortly afterwards revealed the failure of the insulation materials. Instead of taking action to ban these materials, the government tried to hide the causes of the fire.

Inside Housing magazine published a handwritten memo from the BRE, which noted “a request” from the government press office “to play down the issue of the fire”.

Similarly, in a fire at Lakanal House in 2009, where 6 people died, the government refused to release its report on the fire. In the investigation that had been carried out, it was revealed that Southwark Council – which was responsible for the safety of the building – had failed to carry out fire safety checks at Lakanal. The coroner’s recommendation for the government to review the building insulation regulations was completely ignored.

Indeed, according to a BBC revelation, 13 years before the Grenfell Tower fire, the government had commissioned the BRE to carry out a series of fire resistance tests on insulation systems. One of the insulation systems that failed the tests included the same material that was later used in the Grenfell facade!

In other words, the government was well aware for years of the dangers of using this material, not only on Grenfell Tower but also on other high-rise buildings.

At the same time, the thermal insulation companies did everything they could to “cheat” in order to pass the fire resistance tests, so they could sell their flammable materials, knowing that this could endanger thousands of lives.

Significantly, during the investigation, Jonathan Roper, a former product manager of Celotex – which manufactures the plastic insulation used in the Grenfell Tower cladding system – said that Celotex deceived the inspectors with “completely unethical” ways in order for their flammable product to pass fire resistance tests and be used in the cladding systems of the buildings.

At the same time, he gave evidence that he had told the company in 2013 that the insulation later used at Grenfell “realistically should not be used behind most cladding panels, because in the event of a fire it would burn”.

But not only did the company not withdraw that product, it was trying to find ways to enable it to pass safety tests with false data.

What emerges is that there is a consistent pattern of inadequate investigation and data concealment that has resulted in entire apartment buildings housing masses of working families going up in flames.

These are not isolated incidents, but a deliberate criminal government policy. The cover-up of dangerous flammable insulation makes the government morally responsible for a premeditated crime.

M. Masfield, who is representing the survivors and relatives of the victims who died in the fire, said at the inquiry, that former UK Prime Minister David Cameron, who in 2012 said “I think that will take a lot of fear out of the health and safety monster and make sure that businesses feel they can get on, they can plan, they can invest, they can grow without feeling they are going to be strangled by red tape and health and safety regulation”, would need to be examined.

Such statements, made by a prime minister, clearly illustrate the policies of austerity, cuts and privatisation faithfully pursued by the ruling class, resulting in lives being sacrificed on the altar of profit.

As long as these policies prevail, there will be working class victims, who will pay the price of the rabid battle for profits in which the ruling class is engaged. It is high time that the safety and health of the broad strata of the population were put before corporate profits.