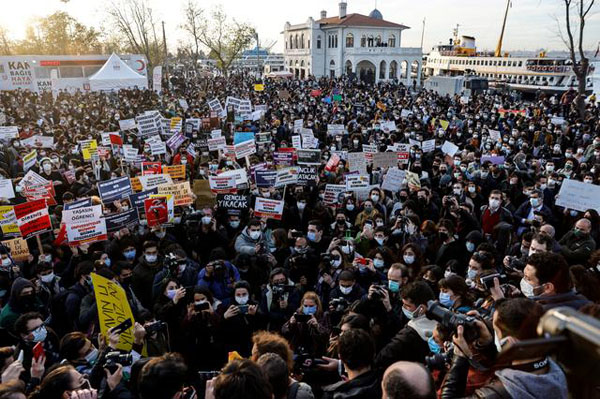 Erdogan’s appointment of a rector by decree at Istanbul’s Boğaziçi University has sparked resistance from students. The regime cracked down on the students with detentions and arrests. There were solidarity actions with the protests, which have been fueled by the general discontent towards the regime. The student protests continue in various forms.

In Turkey, universities have importance as places where young people get politicized. The Erdogan regime though has been following a policy of taking control over the various institutions in society. The judiciary, for example, is now completely under Erdogan’s control, and can even overrule decisions of the Constitutional Court, if he does not like them. Currently, more than 90 % of the media is under Erdogan’s direct or indirect control. The same goes for the universities. In this context, Boğaziçi University can be described, from the regime’s point of view, as the last bastion to be conquered.

For this reason, Erdogan’s decision to appoint a new rector for the university by decree was rejected by different sectors in early January. They argue “We want to choose our rector ourselves” and use the slogan “We don’t want a trustee-rector”, a reference to almost all elected mayors from the People’s Democratic Party (HDP), who were removed by decrees last year and replaced by so-called “trustees”.

On the first day of the protests, there was a clash between students and the police in front of the entrance of the university. Erdogan’s regime attacked the democratic demands of the students and the police tied the metal gates with handcuffs to prevent the students from entering the campus. Nothing could better illustrate the repressive character of the regime than this moment. The public interpreted these pictures in exactly this way and the repression was met with great indignation.

The Interior minister accused the students of being members of a terrorist organization, Erdogan claimed they were terrorists. Bahçeli, the leader of the ultra-nationalist party MHP and the de facto coalition partner, went even further, calling the students “the snake whose head should be crushed.”

At the same time a defamation campaign targeting the students was launched to discredit the protests. In particular, they targeted LGBTQ+ people participating in the protests considering them to be a weak link. A propaganda campaign was launched based on the allegation of an “attack on religious values”, taking advantage of an incident where students at an exhibition showed an image of the Kaaba, a central religious symbol of Islam, next to a rainbow flag. As a result of this campaign, five students were arrested. One was released later, two were placed under house arrest, and two students put into detention. The LGBTQ+ students club at the university was shut down and banned by the university administration.

The students were subjected to police violence during their detention. In a video posted on social media, a police officer ordered students, when they were taken to the detention vehicle, to look down, that is, to bow down. This gave rise to the slogan “we will not look down”, “we will not bow down”, which very soon went viral across social media. Solidarity actions were organised in cities like Ankara, İzmir, Samsun and in many other towns and universities. However, these actions were suppressed by the police before they could start.

In some districts of Istanbul, for several days people banged their pots and pans outside in the evening — a tradition established during the Gezi protests of 2013. So far 560 people who participated in the protests have been detained, and more than 100 people were released only on condition of judicial control. Currently, more than 25 people have been sentenced to house arrest, and nine students are still in detention.

The emergence of the slogan “we will not look down” was a turning point in these protests. It goes further than the actual issue that sparked them off and showed the potential for them to become an expression of general dissatisfaction with this regime.

The events have recalled the memory of 2013 for many — not least within the regime itself. At that time, police acted in the same vicious way against activists who wanted to protect the trees in Gezi Park and triggered the largest spontaneous protests in the history of the country, the Gezi protests. However, since then much has changed.

On the one hand, the regime used the war in Syria, the attacks on the Kurdish fighters, the 2016 coup attempt and the state of emergency that followed it to increase Presidential powers for Erdogan allowing far reaching attacks on democratic rights and extending repression. All these factors make the emergence of such a movement more complicated.

On the other is the deepening economic crisis and high inflation, which are eating into the social base of Erdogan’s regime. There have been election defeats in a number of cities, various corruption scandals, conflicts within the ruling ‘Justice and Development Party’ (AKP) itself, and the mishandling of the Corona pandemic, all of which have had destabilising effects on the regime. A dangerous combination for the ruling elite, and Erdogan is well aware of it.

Even after the vicious attacks by the police, the protests continue at the university campus and the situation remains complicated and tense. They demonstrate that the regime has not much left to rule other than repression. They show once more how deep the discontent and anger is. And they are growing in different sections of society, amongst youth in particular where the regime has dramatically lost support, amongst women who frequently try to protest against the sexist attacks of the regime, and of course amongst workers who are trying to lift their heads.

2020 started with the threat of a strike by metal workers, only called off after reaching a deal. During the year there have been several smaller strikes and protests by workers, who have been laid off, although this was supposed to be illegal during the Corona crisis. The year ended with protests by supermarket workers, and even amongst football clubs with a 60 second strike in December. 2021 started with strikes and various smaller protests at Amana Foods, of construction workers at the Galataport site in Istanbul, and construction workers in the Istanbul Finance Center, who stormed their canteen in protest at bad quality food.

Inflation is eating away at pay levels, threats of job losses are common, and forced “unpaid leave” are making people angry and desperate. The situation is far from easy, but Erdogan is aware that a volcano is building underneath his regime…