Turkey: Medical workers on a 2 day strike against attacks on the health sector 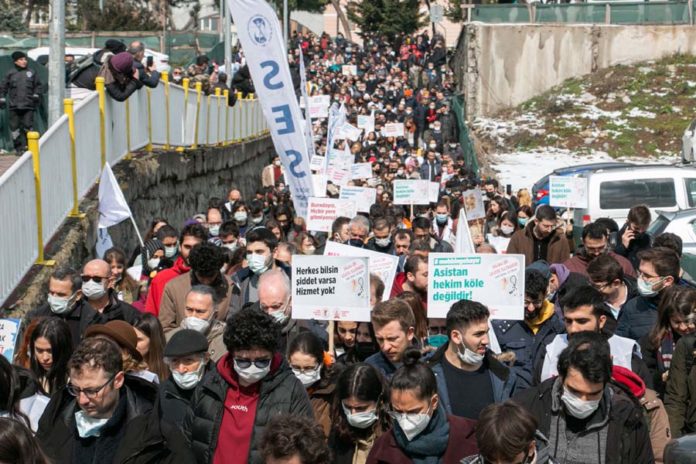 Medicine Day is celebrated on March 14 every year, this year it was marked by doctors and medical workers going on a two day strike.

Professional organizations of health workers went on strike on March 14-15 to voice their problems against occupational violence, low wages and the heavy workload that has been increasing with the pandemic.

Since 2005, the neoliberal-conservative AKP government has indeed expanded the coverage of health insurance both in terms of population and services, but at the same time without increasing the level of funds and investments going into the health sector. The decrease in the pay of health workers and the increase in their workload made this “miracle” possible.  Doctors’ appointment intervals have been reduced to 5 minutes, which is an attack on both the patients’ access to quality health services and the professional rights and ethics of physicians.

In a prominent case that highlighted these harsh working conditions, a resident physician died in a car accident after leaving a 36-hour shift. This is just one horrific example among many. Violence against physicians is also on the rise, but continues to be ignored by the public administration. Under these inhumane conditions, the number of physicians who go abroad to practice medicine is about to exceed those who have graduated.

During the strike, only emergency, cancer, dialysis and intensive care patients were served. In a period of intense emigration of physicians, days before March 14, the statements of the Turkish President Recep Tayyip Erdoğan saying “let the physicians go if they want” increased the anger among the healthcare professionals and their support for the strike. The President of the Turkish Medical Association (TTB) Sebnem Korur Fincancı, wrote a letter to its members stating; “we were here, we are here, we will stay here”.

In a statement to the public from TTB, the following sentences are included:

“The health of the society is getting worse day by day, and access to health is getting more difficult. While the health system is unsustainable, we have to work with low wages and heavy workload under the threat of violence and malpractice in health. We are in the period when our honor and labor are rendered worthless”.

While the Minister of Health systematically refuses to meet with TTB and physician representatives, TTB had organized demonstrations such as rallies many times in 2021 and 2022, protesting the violence its members face, as long as having to deal with the increased burden due to the pandemic which falls on the shoulders of health workers. In November 2021, TTB members started a “White Walk” from İstanbul to Ankara, the capital- a distance of around 450 kms.

The attack by the police on the press conference accompanying the strike in Istanbul and the pushing a professor over the age of 89 to the ground caused a serious reaction. TTB, in its evaluation after the strike, announced that they carried out the most intense strike in the history of the health sector in Turkey.

The strike of the workers in the health sector is in line with a general trend of a rise in workers struggles and popular protests of the previous period. These developments reveal the process of collapse of the Erdogan regime and the important changes it will mean for the situation in Turkey.