Turkey: Fincancı, president of the Medical Association was taken into custody 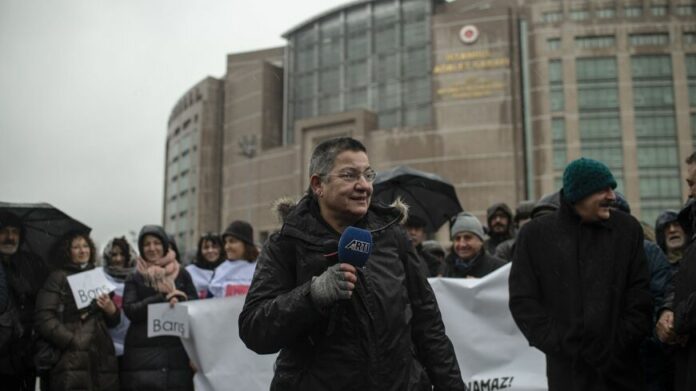 Şebnem Korur Fincancı, who is both an academician and the president of the Turkish Medical Association (TTB), was taken into custody after her house was searched in the morning hours of Wednesday, October 26. Mainstream media reported that weapons, bullets and organizational materials were found during the raid. However, you can buy the book Dağın Ardına Bakmak, which is supposedly an “organizational material”, from any bookstore.

The reason for the investigation against Fincancı was a statement she made about allegations that the Turkish Armed Forces used chemical weapons in their operations against the PKK in northern Iraq. In the statement, Fincancı, who is also a professor of forensic medicine, stated that the images suggest that chemical weapons may have been used and that this should be independently investigated.

Fincancı then learned from the media that an investigation had been launched for “spreading terrorist propaganda” and informed the prosecutor that she could voluntarily come to testify at a convenient time. Despite this, the chief prosecutor’s office initiated the process of detaining her and turned this process into a show.

However, according to the assessment of legal experts, neither this detention nor the investigation has any legal grounds. We live in an atmosphere where breaking the law by the state itself has become the “new normal”. This attitude cannot be explained by legal terms, but only by political ones. It is not a new tactic for the AKP to target and repress people in order to win over nationalist votes. The ultra-nationalist MHP (Grey Wolves) leader Bahçeli, an AKP ally, has also been targeting Fincancı for some time.

On the other hand, it is obvious that the attack will not stop here. The prosecutor’s office has sent a request to the judiciary to start the process of electing a new president of the TTB. There is talk that the attack may not stop with the renewal of the congress of the TTB, which is the professional organization of physicians and has nearly 150,000 members, and that a AKP trustee may be appointed to run the Association. There is even talk of the possibility that the TTB may be closed down, just like what happened with the HDP (Peoples’ Democratic Party) municipalities, where effectively the regime took control because it didn’t approve the outcome of the local elections.

The detention of Fincancı and the attempt to silence her through this method is a form of intimidation for all human rights defenders. The arrest of Fincancı, who has become an open target, confirms the assessment that the AKP will increase pressure in Turkey, in view of the 2023 elections. The new “Law on Censorship”, enacted in recent weeks, stipulates that “misinformation” on social media will be punishable by up to 3 years in prison. On Tuesday, October 25, 11 Kurdish journalists were detained with reverse handcuffs and torture based on this new censorship law.

Protests took place all over Turkey yesterday. “Fincancı must be released immediately” was the main demand. There is a pressing need for the expression of international solidarity regarding this case, in order to achieve this goal. We call on unions, movements, left organisations and progressive people worldwide to help spread the word.

Video from the protest in Istanbul for the release of Fincancı