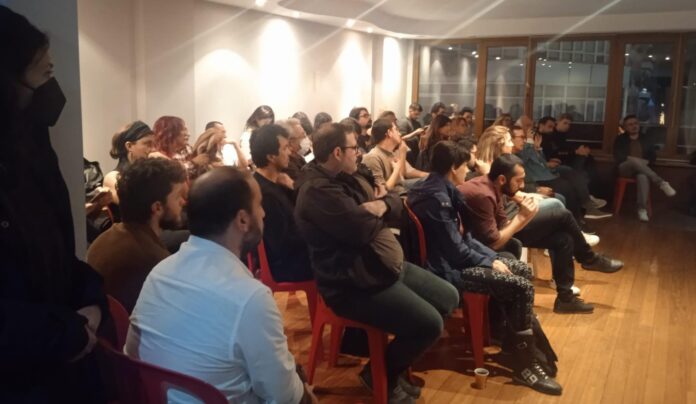 On Tuesday, November 1, the Kadıköy branch of the Workers Party of Turkey (TIP) held a very successful meeting with the title “War or Peace? Political and military tensions on both sides of the Aegean”. The meeting was held at TIP’s Kadıköy local center and was attended by more than 50 TIP members and left-wing activists.

The meeting was moderated by Foti Benlisoy from the local branch of TIP.

Nikos Anastasiadis opened the meeting and talked about the new international situation that the war in Ukraine has opened. The rise of China and other developing countries and the fall of the relative power of US and Western imperialism influences the situation in the area.

In the East Mediterranean area, there are two main consequences of this changing situation. The first is that the energy crisis, exacerbated after the war in Ukraine started, is leading to a reshuffling of the cards on how and through what channels will the underwater gas reserves be exploited (you can read more on that issue here). The second is that the states of the area are trying to position themselves in an environment of shifting alliances. The US is trying not to completely lose Turkey to the Russia-China side and therefore making some concessions, Greece is trying to tie itself to the NATO chariot as firm as it can to be proclaimed its watchdog in the area, even Lebanon and Israel signed an agreement over their maritime borders!

In this changing landscape, the Left needs to boldly intervene to push back against the danger of nationalist tensions and war incidents. The Left should:

Athina Kariati then took the floor and talked about the background of the tensions between Greece and Turkey. The clash of the ruling elites in the Aegean and Eastern Mediterranean seas is not new, even though it has been intensified since the explorations for gas started in the Cypriot EEZ.

The conflict goes way back. The continental shelf delimitation, the gray zones and the 150 small islands of the Aegean may be the most famous points of conflict, especially during election times. But the two ruling elites have been at war in Cyprus in 1974, and have been close to war in 1976 and 1987, when the Greek government attempted to explore for natural gas deposits near Thassos in northern Aegean.

The history of the conflict is important for the Left, in order to understand the class character of it. The working class has nothing to win from this conflict, she said. Even though none of the three ruling classes, Greek, Cypriot, Turkish, nor the imperialist forces involved in the area, today, does want an all-out war, however we cannot base our hopes that they can contain the conflict.

When the first explorations for natural gas started in the Cypriot EEZ, the traditional left of Cyprus called it the “gas of peace”. This is a naive and ahistorical position. No ruling elite has shared natural resources without a war. Iraq, Libya, Syria, are just some recent examples of that.

On both sides of the divide in Cyprus, nationalism is rising. The same goes for Turkey and Greece. The coming elections in all three countries are enforcing this trend.

The Left has to learn from history, fight together against nationalism and build bridges of solidarity and cooperation of the working class in the three countries.

The final speaker was Hakan Güneş from TIP. He also spoke about the new world situation and the new militarisation race worldwide. He drew parallels of today’s epoch with the situation faced by world capitalism in the period between 1870 and 1945 and referred to Lenin’s analysis of imperialism. In that context, the struggle for peace is brought to the center of our efforts.

He then spoke about the concrete differences between Greece and Turkey, namely EEZ’s, gray zones, the Cyprus question, the continental shelf and others. He said that there can be solutions in all these problems based on international law. We need to have regional cooperation in order to escape the imperialist trap.

The Erdogan regime, he said, trying to balance between different world imperialist powers, has found itself isolated. The F-16 and F-35 fighter aircraft debacle was a huge blow to the nationalists in Turkey. There is a need to engage in campaigns to put a brake to the arms race in the region.

He emphasized that we need to struggle for workers’ power on both sides of the Aegean and Cyprus in order to address those differences in a peaceful way.

What followed was a very interesting and lively Q&E session, with multiple people taking the floor and asking questions and making comments about a number of topics: from general themes such as how should the Left act at times of crises and what should its attitude be on the issue of immigration, to more concrete questions about the position of left-wing parties in Greece and Cyprus. One member of the pensioners union concretely proposed joint actions between pensioners in both sides of the Aegean regarding living standards.

Overall, there was a prevailing mood at the meeting that the Left in Turkey, Greece and Cyprus should engage in a common struggle in order to put a break in warmongering and rising nationalism. The Left should also be at the forefront of common struggles regarding everyday issues in order to build links of solidarity between the peoples.

The Workers’ Party of Turkey, as a rising force inside the Turkish Left, stated that they want to be in the forefront of such a struggle.