Third «Αrt against Fascism» festival in Athens and Thessaloniki 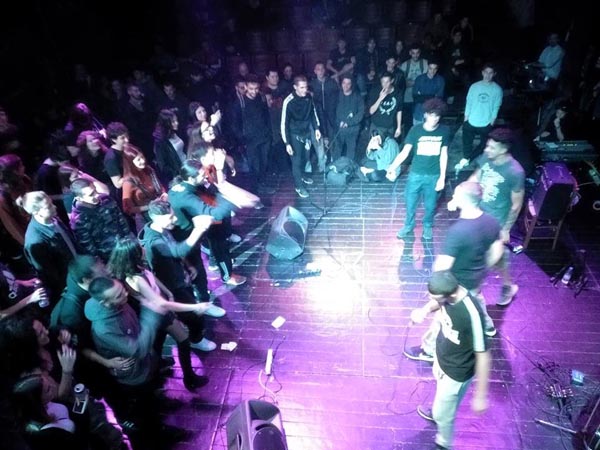 For the third year in a row, the youth festivals organised in Athens and Thessaloniki, under the title «Art against Fascism» were very successful, with hundreds of people, mainly youth but also older, taking part. The festivals, organized by Antinazi Zone –an initiative taken by Xekinima– is already an important antifascist annual event! Both events are organised on the same date – this year Saturday, November 2.

More than 600 participated in Athens, and around 350 in Thessaloniki. There were many volunteers, who helped a lot to set up the festival. The events combined antifascist short films, antifascist photo, comic and drawing exhibitions, a public meeting and of course music.

In Athens, the venue «Embros» was already quite full around 6.30 pm, time when the public meeting about the trial of the neofascist «Golden Dawn» began. At least 75 people took part in a very lively and very substantial discussion. The antifascist comic exhibition «Χ them out» with 50 comic strips by professional artists, each depicting a fascist attack, was very well visited. A number of young people also participated in the exhibition with their own photos and sketches and drawings. As the time was passing, the number of youth coming to attend the festival was growing. The concerts started around 8.30 pm. The youth rock and hip hop bands, the antifascist lyrics, as well as the rest of the cultural events, created a free, creative atmosphere for everyone!

The ΤΑΚΙΜ venue in Thessaloniki was full of people from 5.00 pm onwards until late at night. The walls were decorated with antifascist photos and paintings, while youth bands with antifascist songs kept the atmosphere lively until well after midnight. The big antifascist banner at the entrance was created by young volunteers who contacted «Antinazi zone» in order to help with the preparation of the festival. During the evening, a teacher who participated in the festival, drew sketches of many people who came to the events.

In both cities, the festival t-shirts (this year with Woody Guthrie’s slogan «this machine kills fascists») were sold out! More than 200 badges/buttons were also sold at the two events. The costs of organizing the festivals were close to 2,000 euros, but these were covered and a few hundred euros profit were made to finance further events. Over 40 youth left their contact details for further discussions.

The next few weeks will continue to be full of activities for the youth wing of Xekinima. On November 17 we have the anniversary of the student uprising against the military Junta in 1973 and we need to mobilise fully for the demonstrations taking place in every city. Before that, public meetings are planned on the events in Chile. On the 25th we will participate in the mobilisations against gender violence and are planning a public meeting on it in Athens. And on the 29th, of course, Xekinima will intervene in the youth mobilisations against climate change, which, though still lagging far behind compared to other countries they are bigger than the ones in the first half of the year.